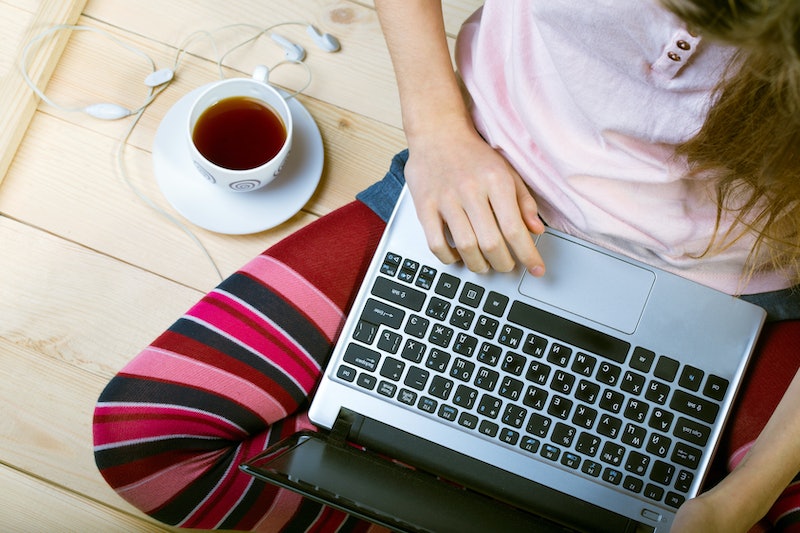 Mandy Stadtmiller is known for personal writing. As a writer, comic, and host of the podcast News Whore , Stadtmiller uses her experiences in both the workplace and dating realm to generate fresh, funny and highly readable material for publications such as the New York Post, Penthouse and xoJane. In her latest project, Dear TMI-ary , Stadtmiller chronicles her romance with Pat Dixon, a 44-year-old stand-up comic and host of the podcast "The New York City Crime Report."

Stadtmiller hinted at her budding relationship in an xoJane article, “I Gave a Guy a List of All My Relationship Expectations on a First Date.” Having partnered with PlentyofFish.com to test out popular dating clichés for The Mandy Project, Stadtmiller feels her shift into writing Dear TMI-ary seemed organic. “It’s something I’ve long thought would be a really cool thing to try, which is to use Kindle and e-publishing in a way that people use blogs and to see how it monetized — and to see how it worked for me as a writer,” she said. She especially wanted to find out if being uncensored would be more fulfilling.

Straight from the source, here's some of Stadtmiller's best advice on writing about a personal relationship:

1. It's Not "Oversharing" To Write About Your Life

In some respects, her title Dear TMI-ary is intended to flip the bird at those who accuse Stadtmiller of putting too much out there in her writing. “I got the idea when I was hanging out with Pat. I was like, ‘You know, I really want to write about this and I think you would actually be okay with it.’ Then I was lying in my bed, trying to meditate, and it hit me: this [project] needs to have a series name because if I do this, if I do a bunch of these, it makes sense for someone who wants to go back and read them. And then I just remembered Dear TMI-ary, which I had registered on Tumblr a couple years ago. It’s funny because it’s kind of cheesy and pun-ny and dumb, but for some reason I like the title.”

Stadtmiller went on to describe her process in sending out the first draft of Dear TMI-ary to her inner circle of readers for their comments. “I sent it out to some of friends to see if they thought it was okay and one of them wrote back and said, “Why don’t you call it Overshare?” I fucking hate that term. TMI is a play on it and it’s a little bit of reclamation and it’s in your face,” she said. “I don’t know why overshare bugs the shit out of me. I’ve just never liked that word. I feel like it’s when people call women ‘crazy.’ It’s very pedestrian and basic. It’s very reductive.”

2. Be Aware Of The Challenges

There are, of course, challenges in writing about a new relationship in real-time. I asked if she ever catches herself stopping in the middle of a moment to think, This would make a good story. “Oh god, no. Nope. I can tell you that when I did my dating column for the Post, I’ll still find notes that I wrote down on a cocktail napkin. Usually, those dates, I never wrote about. Something I’ve discovered that leads to good writing… is organically letting the best of the story bubble up to the top."

“It can be very stressful initially to trust your gut. And so that’s the approach I’ve taken if I do memoir. I mean, I have done that before, where if something was so funny I’ll email it to myself because I know I’m scattered and overworked and I don’t want to forget it. But especially in the beginning, that’s kind of a drag to make someone feel like an interview subject rather than someone you’re dating.”

3. Embrace The Power Of Theatrical Journalism

In describing the kind of writing she does for Dear TMI-ary, Stadtmiller brings up Tina Brown’s claim that that the future of journalism is in theatrical journalism.

“Dear TMI-ary is a sprawling, undefined memoir where you don’t know what’s going to happen… I love anything that I’m going to do that makes me in love with writing. To me, this is my favorite kind of thing to do, which is to be feeling the process of discovery and insight as I’m doing it. And I love that. And to also feel safe enough to do it because the people who are reading it, they enjoy my writing.”

Stadtmiller is, by now, used to the chatter of commenters who will sometimes write in with negative feedback. “I’m sure that there will definitely be people who chime in and say that it’s narcissistic drivel, but it’s definitely worth it for me any time anyone tells me they have any kind of connection or insight or they feel some reflection into their own human experience from what they’re reading. That, to me, is the entire point of life for me. Nothing makes me happier than that. Nothing gives me more motivation or inspiration.”

5. Market Your Work With Intention

In Volume I, Stadtmiller wrote: “I could see the look in his eyes that has made me fall in love with him, where he understands exactly where my scheme is coming from.” I asked her what she meant by that and she smiled. She said that Dixon understood that “this was a marketable concept. That it was exciting to do something in real time. That it was kind of dangerous. That it could explode spectacularly in my face – and that’s what made it interesting to watch. That it was an entrepreneurial move. He has a podcast and he self-teaches for it. It’s a hustle and I think hustling is a good thing. I don’t think it’s a bad thing.

I don’t want to give anything away for Volume II , but events in Stadtmiller’s life do take a hard turn, leaving the relationship in a place of uncertainty, but there’s also a sense of optimism infused by the narrative’s end. Keep in mind that all of this has happened in the last week, in real-time. Of all people, Stadtmiller understands this as one of the most difficult aspects of her project.

Given the shift in tone and content for Volume II, I wondered if Stadtmiller was bracing herself for the reaction of readers. “It’s just that for something that is incredibly personal and emotionally charged and loaded, you have to be careful with how you put yourself out to the world, knowing what the ramifications are. What I do care about are people whose opinions I respect… The Internet is always going to have these aspects and you can’t let those bad elements win. You can’t let it stop you from doing writing that might be painful or difficult or messy.”

7. Write About Others With Sensitivity And Empathy

“I think it’s a no-win situation. And I think that sometimes you just have to represent yourself, even though you’re not representing yourself as some rock star,” she said. “To me, if I’m reading someone and they don’t come across as well, if it seems like they’re being honest, I’m okay with it. Honestly, I don’t think I’ve ever been that out of my mind with grief before, going through that experience. And so, I can’t imagine anyone saying anything to hurt me because I’ve never felt so obliterated by something before. I don’t know. Sometimes grief and pain can be a gift because it can make you stronger, where you aren’t susceptible to other people’s reactions because you’ve already kind of put yourself through the wringer."

As a reader, I’m rooting for Stadtmiller as she continues writing the series. “It’s taking the memoir writing a step farther and seeing how it survives and thrives, what it looks like in real-time, if it’s a sustainable thing. I think it is because I love, love doing this writing – I think it’s a blast, and when it lands right it’s rewarding for the reader. I definitely wouldn’t pull the plug without letting it run for long enough to feel like I’m not a quitter when it comes to projects.”

More like this
How To Set Rules If You're In An Open Relationship
By Lexi Inks
10 Ways To Be More Empathetic To Your Partner
By Raven Ishak and Lexi Inks
The 19 Best Tweets & Memes About Bisexual Awareness Week
By Lexi Inks
21 Signs You're Not In Love Anymore
By Sara Altschule, Kathleen Ferraro and Carolyn Steber
Get Even More From Bustle — Sign Up For The Newsletter