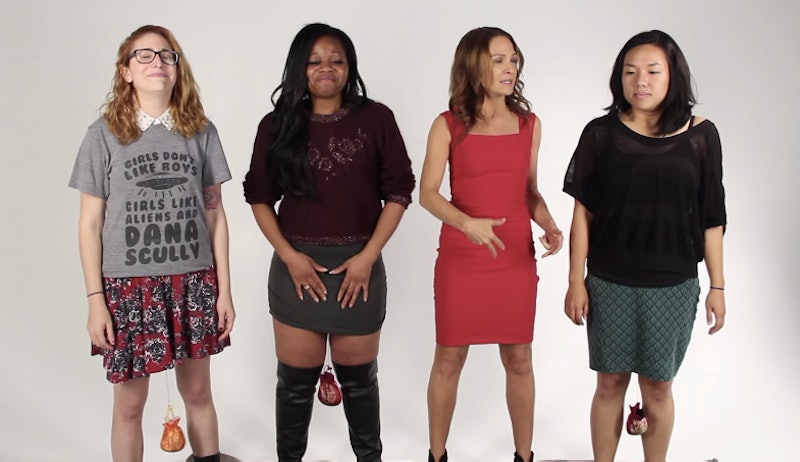 Have you always wondered if you might be able to lift objects with the awesome power of your vagina? Today is your day, my friend. According to Kim Anami, a holistic sex and relationship coach, vaginal weightlifting is just the ticket for improving one’s sex life, increasing libido, strengthening the pelvic floor, and creating more intense orgasms. In a video filmed for BuzzFeedBlue, Anami coaches three weightlifting beginners through the basics of lifting things with their lady-parts, starting with light bags of crystals and culminating with what appear to be bottles of Gatorade(?). The video is a fun look at how this practice works, and the three incredibly game participants hilariously discuss the unusual feeling of having objects hanging from their vaginas.

I have to say, however, that there’s one major needle-scratch in the video for me, when Anami says:

All women can strengthen their vaginas, all women can have vaginal orgasms, all women can lubricate profusely, all women can shoot ping-pong balls across the room. This is in the realm of ‘normal’ for every single female on the planet, and it, just like any other muscle, if you don’t consciously use it, it atrophies and it becomes weak, and if it’s weak, it’s numb, and so most women on the planet are walking around with fairly numb vaginas.

This remark… irks me. Maybe because I’m naturally skeptical of any blanket statement about “every single female on the planet,” maybe because I’m not sure why we all need to play Ping-Pong with our lady bits, but I’m bothered by Anami’s insistence that all women can have vaginal orgasms and lots of lubrication—and that, if they don’t, their vaginas are “numb.” Doctors and scientists are still debating whether the vaginal orgasm even exists , but whether it does or not, multiple studies have shown that only 25% of women can orgasm from vaginal stimulation alone, with most requiring clitoral stimulation to climax. In a culture that often casts vaginal orgasms as somehow more legitimate than those achieved through manual or oral stimulation, women don’t need more people telling them that there’s something wrong with their orgasms. That’s not to say that one shouldn’t strive for new heights of pleasure and variety in their sex lives, but if you’re perfectly happy getting your rocks off with your clitoris alone, there’s nothing wrong with you, and your vagina is not atrophied or “numb.” Let’s all say it together, friends: Your orgasms—however, wherever they happen—are awesome.

Anami has previously made headlines with her Instagram account, which shows all the different things she can lift with the power of her vagina, including:

Donuts (Did she eat them afterward?)

And an Oscar (because why not?).

This video is worth watching, if only for the scenes of the participants playing with their new… exercise equipment. (As one woman says, "I also really enjoy just kind of swinging my sac back and forth." More power to you, lady).