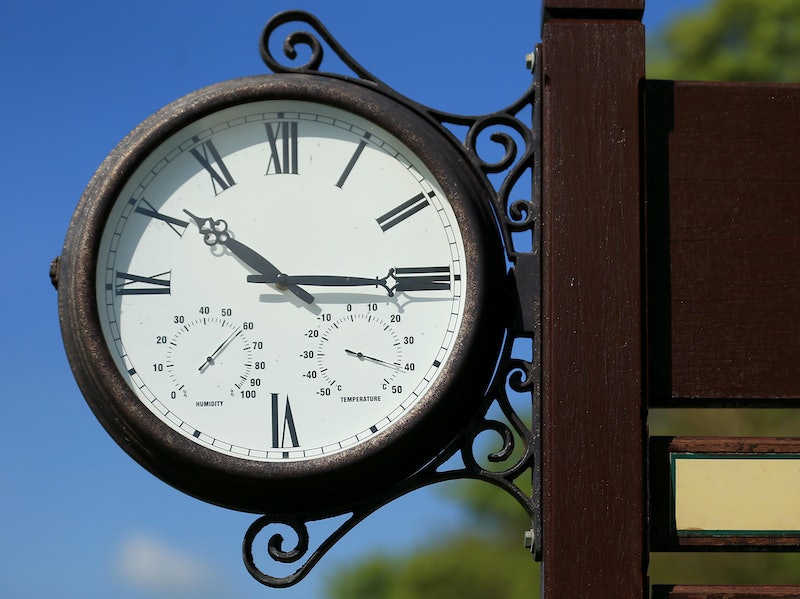 Depression does a lot of things to us, none of which are good — it can screw with our appetite, weaken our immune system, cause us to lose sleep, and more. But does depression alter our perception of time? That's what a new study from Johannes Gutenberg-Universitat Mainz in Germany attempted to find out — and the results are somewhat surprising.

“I've been interested in time perception and rhythm perception for many years,” said study co-author Dr. Daniel Oberfeld-Twistel to Medical Daily. “In several contexts, we are studying whether basic perceptual processes are altered in persons with psychological disorders.” Given how common depression is — more than 350 million people around the world suffer from it, according to the World Health Organization — it makes sense for it to be the focus of this particular study.

The researchers recently published their findings in the Journal of Affective Disorders ; here's the lowdown on it.

The researchers pooled data gathered by 16 previous studies, resulting in a final sample size of 433 people with depression and 485 people without it. All the studies examined how depression may or may not affect the perception of time as measured through four different time perception tasks — verbal time estimation, time production, time reproduction, and duration discrimination — as well as through subjective ratings of the flow of time. To give a few examples, one of the studies involved screening a short film for participants, then asking them to estimate how long the film was; another asked them to hold down a button until they thought five seconds had gone by. Once they had gathered the pool of data, the researchers performed a meta-analysis on it to see what it had to say.

The results are actually somewhat surprising: When it comes to those four time perception tasks, people with and without depression perform equally well. However, it's also worth bearing in mind what the researchers gleaned from the studies that had participants subjectively rate the flow of time—that is, that depressed people are more likely to report that time feels like it's “dragging” to them than non-depressed people.

In science-speak, the researchers concluded, “Depression has medium effects on the subjective flow of time, whereas duration judgments basically remain unaffected.” In layperson's terms, though, taking those two pieces of the puzzle together gives us the following picture: Both depressed and non-depressed people can estimate the passage of, say, five minutes with equal accuracy — but to a depressed person, those five minutes feel a whole lot longer. Interesting, no?

Does Time Slow Down For Anyone Else?

Time is a tricky thing. Sure, we can measure it with standard units and set our clocks forward and backwards when we need to — but how we experience it may be completely separate from how it actually passes. Here are five other types of people and situations that can result in time seeming to slow down — even if it's still passing the same as always:

A study conducted in 1997 found that people in their 20s can pin down a three-minute interval fairly accurately — but that people in their 60s have a tendency to overestimate it. This suggests that older people may experience time as passing more quickly than younger folk, although why that is remains to be seen.

Jeff Conte led a whole bunch of research in the early 2000s geared towards sussing out whether Type A people and Type B people perceive time differently — and, as it turns out, they do. One study conducted in 2002 found that people with jobs who routinely face high time-urgent demands (nurses, e.g.) are significantly more accurate when it comes to estimating the passage of a minute than people with jobs who face low time-urgent demands (small town librarians, in this case).

Whoever volunteered for this study must be far braver than I, because it involved free-falling 50 meters into a net while keeping track of a special chronometer. Interestingly, though, the researchers concluded that the time-slowing that people in dangerous situations experience isn't a function of perception; it's one of recollection. Wrote the researchers, “A richer encoding of memory can cause a salient event to appear, retrospectively, as though it lasted longer.”

4. When the Temperature Drops

Strange, but true: Studies have found that when we're cold, our perception of time slows down; however, when we're hot, it speeds up. So much for lazy summer days.

Actually, this one isn't solely about time seeming to go by more slowly — when we're tired, we actually lose the ability to track time accurately completely. We can't distinguish short periods of time from longer ones. All the more reason to make sure you're getting enough sleep.

More like this
This Psychological Effect Might Be Keeping You From Hitting Your Goals
By Lexi Inks
The 5 Best SLS-Free Toothpastes, According To Dentists
By Amy Biggart and Danielle Calma
Angel Number 111 Is All About Manifesting Your Power
By Brittany Beringer and Nina Kahn
The Meaning Of Angel Number 777, According To An Astrologer
By Brittany Beringer
Get Even More From Bustle — Sign Up For The Newsletter