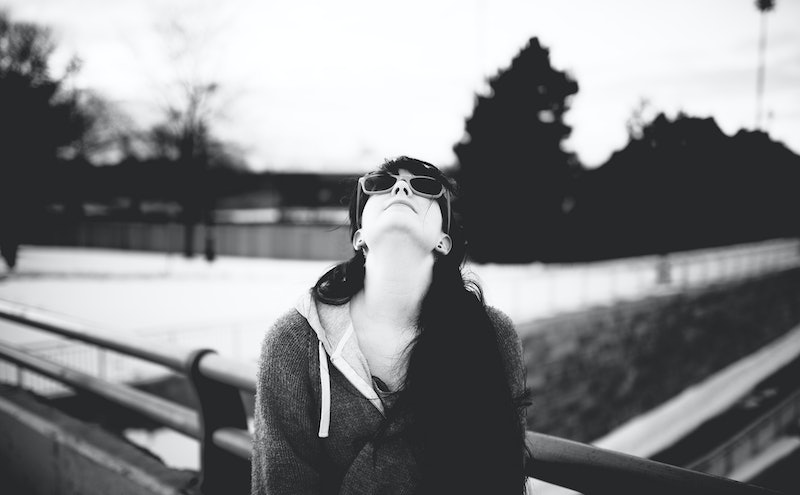 I have so many mixed feelings about the words "never give up." Like a lot of messages we have thrust upon us when we're young and impressionable, we find that there are exceptions to every rule. A phrase that is meant to inspire hard work and perseverance might also, in turn, set you up to be very unhappy in life. For so long, I associated the idea of "giving up" with failure and shame, so much, in fact, that my perseverance was often not admirable, but sad and desperate.

Here's the truth that we steer away from far too often: Your dreams might never come true. And if they do, sometimes those dreams weren't nearly what you thought they'd be. And even more often, you'll find yourself going down one path, working toward something, only realize halfway through that you are going somewhere you no longer want to go, or working toward something that you no longer care that much about. I'm not writing this so that we'll all stick our heads in a toilet and drown ourselves, but because we should be open about this so that we can all put a little less pressure on ourselves. I firmly believe that you should dream big, and work as hard as you can to achieve those dreams, but I also think there is a tipping point where we run the risk of making ourselves miserable just for the sake of our pride.

There is a period of my life that I'm often embarrassed to mention, because it ended in such a cliché. For a while after college, I lived in Nashville, trying to be a successful singer/songwriter. And here's the thing: I wasn't bad. I was making progress. I'm certain if I had stayed, that I would have eventually achieved this dream that was all shiny and untarnished when I first set foot in the city. I was also miserable beyond words, and after nearly a year, I barely recognized myself anymore. But I was convinced that I just had to keep going. That giving up wasn't an option. That the mere idea of it made me weak-willed and pathetic.

I was so ashamed when I gave up and came home, because I had no idea then that it might be the luckiest thing that ever happened to me. Humans are resilient. We find new dreams. I'm happier in my current job than I ever imagined I could be, and if I hadn't eventually given up on the songwriter plan, I never would have made room for the idea of this in my life.

"Giving up" is so associated with weakness that we fail to recognize when it is sometimes our best option. I can't tell you that I'm not still bullheaded and crazy about bringing my ambitions to life, because you can't really change that about yourself, but I can say I have some understanding now on how to cope with them, and when to recognize when my stubbornness has gone too far. If you are also a person who doesn't give up easily, then you'll have faced these struggles on a far too regular basis:

When you have such tight tunnel-visioned on a dream, you know that you are losing perspective, even if you're not aware of how much. Even if you feel more dead set on your goals than ever, you still feel like you constantly need other peoples' reassurance or praise that you're doing the right thing, because you often feel like you've lost sight of the reason you were doing something in the first place.

It is great to want something so much that you are willing to work tirelessly for it, but if you are already predisposed to this brand of stubbornness, it often comes at the expense of everything else. You neglect your relationships, fall out of your social circle, sometimes even barely take care of yourself. For awhile in Nashville, I ignored all my friends' texts back home, never left the house for anything that wasn't work or songwriting, and basically binge ate food I didn't even like until I was all broken out in acne and fifteen pounds heavier than I was when I got there. Yes, I was making progress with my art, but the rest of my human self was suffering for it.

You are irrationally impatient to see results

None of us really expects for anything to magically fall into place, but it is a normal human expectation to think we will be rewarded and recognized for our work with progress being made toward our goals. I envy people who are able to take setbacks in stride, the ones who take a beat and then keep moving, because those of us who are especially afraid of ever giving up can never take it like that. A small setback is the end of the world, and we are mad at everyone and everything that we think is responsible for it—especially ourselves.

It is often the most tenacious people who have the most warped way of assessing their worth. You get it in your head that if you can't do this one thing that you're not worth any of the other good things that might happen to you. When I think of the number of times I felt so knocked-out, insanely angry with myself over circumstances that were often so far beyond my control, it makes me sad that I wasted all that time and energy in the name of not being a "quitter".

If someone tells you it's alright to quit, you take personal offense

It's a weird catch-22: It's almost like we need permission to give up before we'll even consider doing so, but at the same time, once the permission is granted, we feel as if someone has slapped us in the face. We would never let ourselves give up on our own. We weirdly need someone else to throw in the towel for us. But even as they are granting you that mercy, telling you that you fought the good fight and they won't think anything less of you for giving up, it feels like they've lost faith in you, too. There is really no way for these people in our lives to win, and unfortunately, it's always the people who are closest to us.

You sacrifice too much of your happiness to meet your goals

It will have probably been going on for a long time before you realize it, but one day you will be walking down the street, or brushing your teeth, or settling into bed, and suddenly be stricken with the fact that you are totally, utterly, uncharacteristically miserable. This is the part in the movie where the hero chokes out one last gasp and overcomes, and then everything is magically great—but this isn't a movie. This is real life. In real life, you've already given all your last gasps. In real life, you reach breaking points, and you have to acknowledge them, for better or for worse.

For people who are so afraid of it, sometimes giving up takes a lot more strength than it does to continue with something. It takes more effort to admit defeat—even if it is just temporary—than to just clam up and keep going. I'm not saying that people who don't give up aren't brave or strong or anything, but I am saying that there are some circumstances where "not giving up" becomes an act of cowardice. I know that in my case, it was. My pride was more important to me than my happiness for a long, long time.

I think if you are in the field you are meant to be in, chasing the dream that really suits you, even the most tenacious people can minimize these problems. But they never truly go away. I think the best we can all do is recognize them when they happen, and try to keep a healthy perspective on our situations when we can. We're not perfect. Nobody is. The sooner we can let ourselves accept that, fellow aggressive non-quitters, the happier we'll all be.

More like this
The Spiritual Meaning Of Angel Number 000, Explained
By Kristine Fellizar
15 Easy Pranks To Play This Halloween
By Emily Kelley and Lauren Grant
10 Stranger Things-Inspired Halloween Costumes For True Fans
By Emma Carey
Bobby Berk Explains How To Maximize Every Inch Of Your Bedroom Storage
By Marilyn La Jeunesse
Get Even More From Bustle — Sign Up For The Newsletter