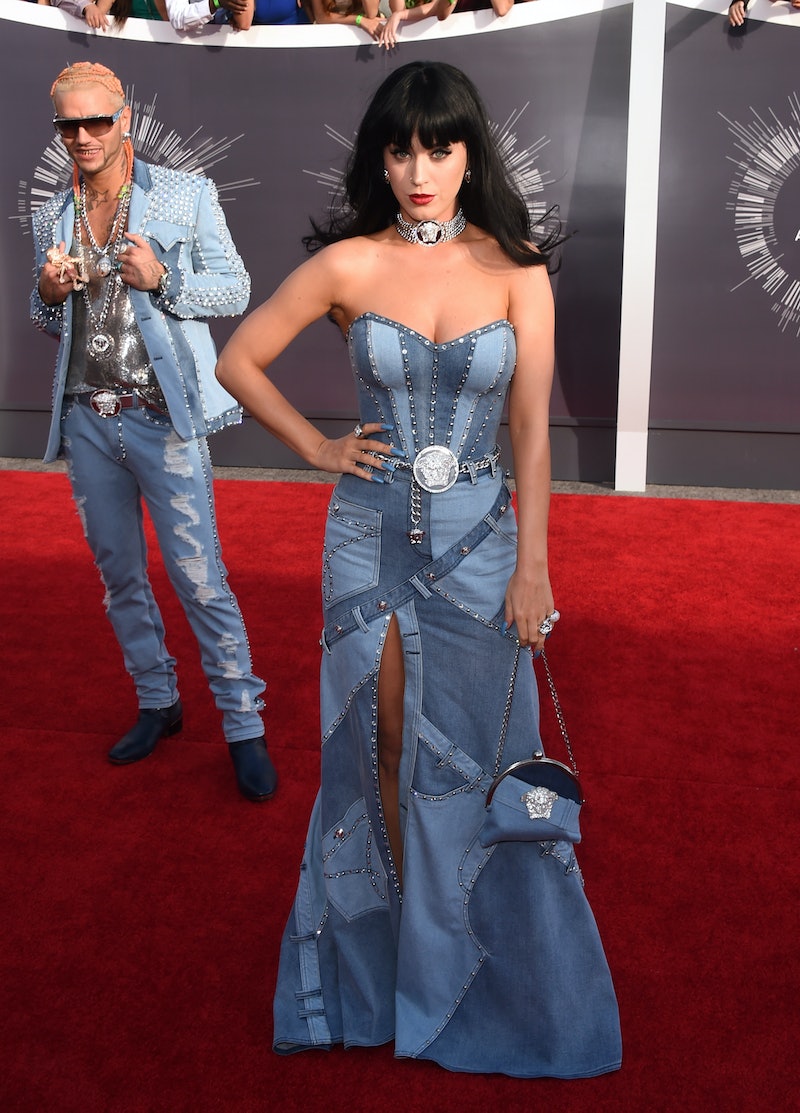 Now, there's three stars you wouldn't necessarily expect to see in a line-up: Head-shaving, snake-dancing Britney. Cupcake-wearing, firework-shooting Katy. Gossip Girl-starring, Ryan Reynolds-marrying Blake. And yet, here we are. And the reason they're in a line-up together is even more surprising than the line-up itself — contrary to what you might assume, it's not about who's selling the best fragrance (though, it's a toss-up between Katy and Britney), or who has the best lifestyle website (ahem, Preserve), or who has the best pop album. Nope, it comes down to who wore a denim full-length gown best.

Britney famously did denim first, at the 2001 American Music Awards — with a very handy assist from Justin Timberlake. Katy Perry followed suit along with Riff Raff at the 2014 VMAs (it was quite the homage, and Britney colored herself quite honored by the statement), and now the latest to take on the denim mantle is none other than Blake Lively — courtesy of a photoshop by her hubby (AKA Ryan Reynolds). Now, who wore it best?

Iconic. I mean, look at JT's fedora and ombre sunglasses!

The mega-bangs complement the look nicely, and all the patchy detailing make it an overall nice update to Britney's OG look (also, how great is Riff Raff mugging in the background?).

Extra points for that expert photoshop job, right? Especially the way he swapped out Justin's head for his own — it's utterly seamless! Also, Britney's beachy blonde waves look right at home on Blake (funny how that particular trend made its way back from 2001 to 2015), so there's that.

What do you think? I'm always going to love Britney and JT, but these new takes on the look keep it alive and in our pop culture consciousness!

More like this
Britney Spears Shares Unknown Details Of Conservatorship In New Voice Notes
By El Hunt
Everything To Know About Taylor Swift’s 10th Studio Album, 'Midnights'
By Grace Wehniainen and Jake Viswanath
These Are The Best Socks A Woman Can Buy
By Lisa Fogarty
The 2022 Emmys' Top Nail Trends
By Olivia Rose Ferreiro
Get Even More From Bustle — Sign Up For The Newsletter