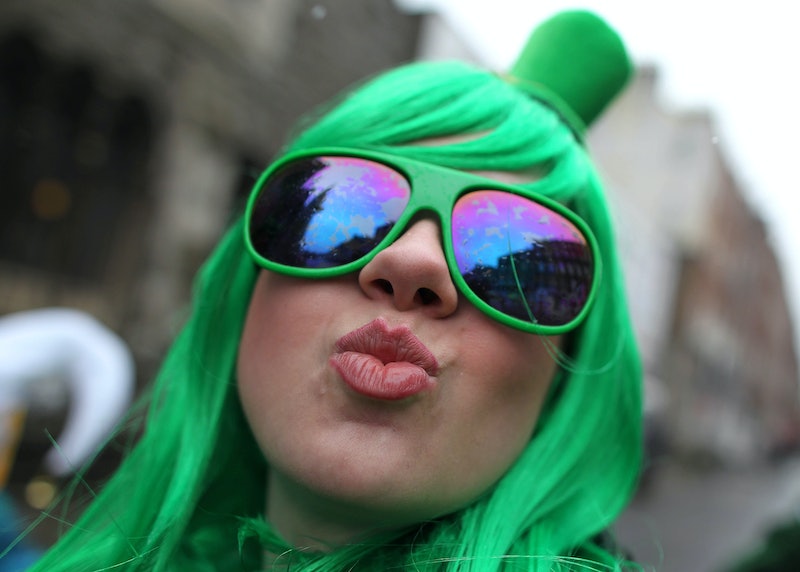 As a half-Irish person who was born in Boston (a city where being Irish is a badge of honor), I grew up thinking of St. Patrick’s Day as a time to reflect on the meaning of my Irish heritage; however, now that I’m older and have been around the block a bit, I’ve realized that some folks use the holiday as an opportunity to get totally and completely loaded, and — as one often does when one is totally and completely loaded — hook up with other St. Patrick’s Day revelers. St. Patrick's Day doesn't necessarily have a reputation the sexiest of holidays, but it can actually be an ideal place to find a new hook-up partner. After all, your local watering hole will be filled with new faces tonight; everyone there will be in a good, celebratory mood; and there's no potentially stressful family element in the mix, like there is on Thanksgiving Eve, the actual biggest drinking night of the year. And, best of all, if you hook up with a person who turns out to be less interesting them a pile of corned beef and cabbage, you can just blame it on the a-a-a-a-a-alcohol.

So, if you're planning on venturing into the potentially murky and green-food-coloring-filled waters of St. Patrick's Day nightlife, let's go over the 13 different types of hook-up partners you'll find out at the bars tonight.

This is a person who, no joke, has actually been drinking since the bars opened. In fact, there's a good chance that they where emailing their boss some sob story about how they came down with a horrible case of food poisoning while they were standing outside the bar waiting for it to open this morning. When you happen to talk to them tonight, they will very proudly announce that they have been drinking all day, as if they want you to give them medal.

Why You Might Hook Up With Them: Because they've obviously got some sort of stamina going on there, and you hope it crosses over into the bedroom.

It is safe to assume that you will hear this line at least a dozen times tonight and yet, for some reason, each person who says it will think they're sooooo original and creative (even if they're just reading it off their own t-shirt). There's a good chance they're also be wearing a leprechaun-inspired hat.

Why You Might Hook Up With Them: Because after a few drinks, you'll find yourself wearing the leprechaun hat, which makes you feel like there's a real connection there. You know, because you both like to wear green top hats in public when you're drunk.

3. The Person Wearing The Funny Shirt

This person's intention is pretty much the same as the one using the "kiss me, I'm Irish" pick up line — but due to their shyness, they let their joke t-shirt do the talking for them, hoping it's a conversation starter.

Why You Might Hook Up With Them: Because that t-shirt totally worked as a conversation starter! A few hours later, you'll find yourself tossing on that very shirt as you scurry to the bathroom in his apartment to make sure your eye makeup still looks hot.

Much like the person who's proud of drinking all day, this type has also put in the hard hours consuming Irish whiskey and Guinness — but unlike the rest of the crowd, they just can't hold their liquor.

Why You Might Hook Up With Them: They'll try to make a joke through slightly slurred speech, end up crying, and suddenly, you'll feel like you guys have really bonded.

If you've ever watched Seinfeld, you know face painters are a breed of their own — and their inborn need to show their excitement through the application of paint to cheeks is something you just can't change. On St. Patrick's Day, this person will be rocking either shamrocks on their cheeks or will have done their whole face up as an Irish flag (in the latter case, it will be difficult for you to tell exactly what they look like).

Why You Might Hook Up With Them: You're an adventurous woman who loves a surprise! You decide to take them home, because when was the last time you got to make out with a talking flag? Of course, your roommates, who will be on the couch when you walk through the door with your hookup, will tease you about your sexual fetish for flags until the end of time.

6. The Person Whose Family Is Actually From Ireland

This person will either be cocky about their Irish heritage because, hey, "I'm the only real Irish person in here," or they'll downplay it (after coyly letting you know about it, of course).

Why You Might Hook Up With Them: While they may not have an Irish brogue, part of you will be intrigued by the fact that they are the real deal, and, well, you haven't had sex with an actual person from Ireland before...so why not cross that off your list? 'Tis the season!

7. The Person Who Says That Everyone Is Irish On St. Patrick’s Day

You can hear this person bellowing out how everyone is Irish on St. Patrick's Day even before you get into the bar, and you're immediately annoyed. They'll then wander from table to table, making sure everyone is aware of their own honorary Irish-ness for the day. At some point, they stop and linger on you because you've seriously upped your green clothing game this year (you're so awesome.)

Why You Might Hook Up With Them: This person will to continue to annoy you, but if none of your other prospects pan out, you'll take them home — while fully knowing that you'll have to deal with them announcing to strangers every step of the way back to your place that everyone is Irish today.

8. The Person Who Hates This Day So Much

Ten minutes of conversation with this sulking and bitter person will seem almost refreshing in the sea of happy, drunken folk. This person will complain about how they came out tonight because their friends made them, while reiterating over and over that this "isn't their scene."

Why You Might Hook Up With Them: Because they have such a different vibe from everyone else in the bar and are mostly sober, they stick out and draw your attention. There might be some hot, aggressive, St. Patrick's Day-hating sex in your future!

Whether it's because they're Irish themselves, or because they took one class that touched on Irish history in college, this person isn't just a Debbie Downer, but a total bore. They'll regale you with totally useless knowledge about root of St. Patrick Day as if they're lecturing to a class, so part of you feels bad for them, while part of you just wishes they'd shut up already.

Why You Might Hook Up With Them: Because they're at least knowledgeable (albeit in a kinda obnoxious way). If they're cute, the best way to shut them up might be to ask if they want to skip the chatter and get down to business.

10. The Bartender Who Wishes They'd Called In Sick

It takes one hell of a tolerant personality to handle bartending on St. Patrick's Day, especially at an Irish bar. And those who don't have that tolerance encoded in their DNA are miserable from the very second their shift starts. This bartender with a bad attitude has already had two dozen people kicked out by 8 pm., and is happily enjoying ignoring the dicks who haven't tipped them all evening.

Why You Might Hook Up With Them: Because after 10 minutes of commiserating with this person about how much you both think people suck, you'll decide to stick around until closing time and cheer up this misanthropic hottie.

11. The Frat Bro Who Takes Today Just As Seriously As SantaCon

This is the person who literally ruins St. Patrick's Day, and pretty much every other party day of the year. They are loud, obnoxious, and have already been 86'd from more than a few bars today.

Why You Might Hook Up With Them: You share a brief moment of vulnerability after they accidentally spill a full beer on you, and before you know it, you're headed back to the frat house (or an apartment that just looks like a frat house).

Midway through the night, through the haze of beer and whiskey, you find yourself talking to someone with the intellect of James Joyce, the looks of Colin Farrell, and also the alcohol tolerance of Colin Farrell. You realize that this person is absolutely your soulmate.

Why You Might Hook Up With Them: Because soulmates, duh! Something this good doesn't happen to you every day! You'll take your soulmate home dreaming of your future together with every kiss (only to later realize, in the cold light of day, that this person not only doesn't look like Colin Ferrell, but in fact is actually missing several very important front teeth).

13. The One You’ll Absolutely Regret In The Morning

OK, let's be honest. Every single one of these people is a regrettable choice. But isn't that what huge party holidays are kind of about?

Why You Might Hook Up With Them: Because hey, you live and you learn. Happy St. Patrick's Day, everyone! Don't forget the condoms!

More like this
Why A Libra & Libra Couple Might Become Codependent
By Kristine Fellizar
Breeding Kinks Have Been On The Rise Since Roe V. Wade Got Overturned
By Lexi Inks
Are Quality Time & Gift-Receiving Love Languages Compatible?
By Lexi Inks
14 Last-Minute Halloween Costumes That Only Require A Flannel Shirt
By Kirsten Nunez
Get Even More From Bustle — Sign Up For The Newsletter