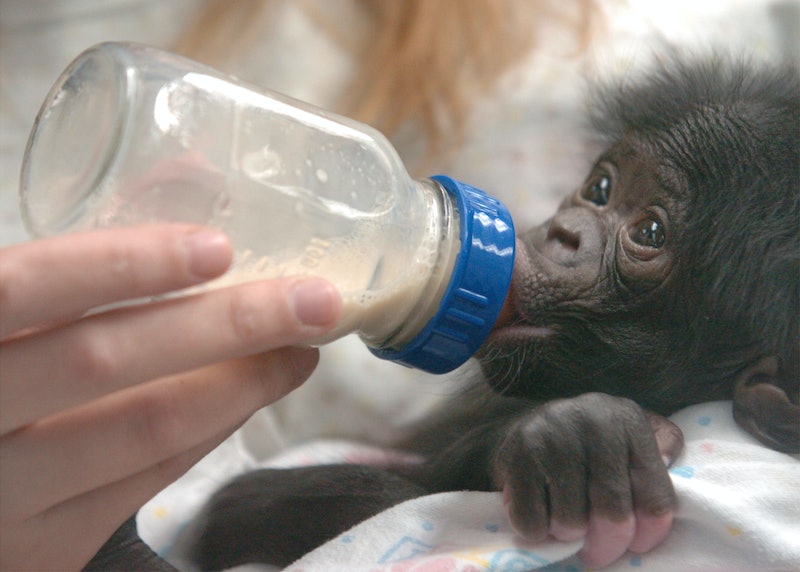 Monkey see, monkey do: New research from a bonobo sanctuary in Congo revealed Wednesday that bonobos raised by their mothers were better at social and emotional skills than those who were orphaned from a young age, emphasizing the importance of parental figures in development. The new research, published in the Proceedings of the National Academy of Sciences, also provided a glimpse into the monkey's social and emotional abilities that, it turns out, aren't so different from our own instincts.

And so, presented in the name of science, here are six ways you're really not so different from a bonobo.

1. Bonobos' ability to empathize is natured and nurtured.

Bonobos raised by their mothers were three times more likely than orphans to comfort fellow bonobos in distress, particularly at a young age. "Juveniles react to the emotions of others but may not yet possess the cognitive filters, compared with adults, who evaluate the situation and are more inhibited and discriminating," wrote the study's authors. Humans are the same way: Infants are able to react to others' emotions, but the development of empathy is also affected by parental factors, including the strength of the bond between mother and child.

2. Sometimes bonobos can't get their emotional junk together.

The study showed that young bonobos who could handle their emotions were more sympathetic toward their peers, and more likely to offer sympathetic touches in times of others' distress. Those who had less control, typically orphaned bonobos, chose instead to run away from those tense situations. In humans, our ability to control anger and sadness is also linked to our abilities to empathize, sympathize, and comfort fellow creatures in distress — basically, the sooner we can get over ourselves, the sooner we can help other people with their emotions.

"Infants without effective [emotion regulation] do not orient to others because they cannot overcome their own personal distress in the face of another's distress," the bonobo study's authors wrote. Sort of like being a teenager, when the utter angst of navigating the black pit that is life and Good Charlotte prevented us from giving a damn about anyone except ourselves.

3. But a hug can actually solve pretty much anything.

Just hug it out, man: Bonobos are the most touchy-feely of the primates and recognize the value of a hug when it comes to providing comfort or make up after whatever a bonobo argument could possibly be about. Of course, humans also tend to provide comfort with touch; it's seen as a crucial way to demonstrate we care.

Make-up sex is a thing in the animal kingdom: It's widely held among the bonobos that sex can solve pretty much any dispute, provide emotional comfort, or simply be a bit of fun. As creatures who are all about free love, they're even thought to get it on more than humans do. According to Barbara Smuts in Annual Editions Physical Anthropology (yeah, I broke out my old anthro notes for this post), like us, bonobos also use sex as a bonding technique (ill-considered or otherwise).

In fact, one of the first studies of bonobos and sex in 1954 resulted in a surprise for researchers: Prior to some revealing peeping-Tom observations by scientists, the missionary position was thought to be a uniquely human position. Turns out, bonobos love the classic position too. Bonobos also enjoy French kissing and occasionally have oral sex — usually on fairly casual levels. However, bonobo sex only lasts 13 seconds... so humans sort of win there.

5. Guys get jealous when you have male friends.

Male bonobos get a little testy with females when they form friendships with other bonobo gents (they even go so far as to attack and threaten them, writes Smuts), although platonic friendships are also quite common. It's sort of like when that guy friend who secretly likes you gets all weird when you say you're going for a drink with that work friend of yours. Chill out, man.

6. Living with your best girl friends is literally the BEST.

According to Smuts in Annual Editions Physical Anthropology, when female bonobos get older, they move out of their family homes and in with unrelated girls. For humans as well, having a roommate (usually a friend of the same sex) is now more common than living with your romantic other half. Fifty years ago, only about one in 20 households were composed of platonic living arrangements.

And now, a video of a really strange bonobo.

More like this
Breeding Kinks Have Been On The Rise Since Roe V. Wade Got Overturned
By Lexi Inks
Are Quality Time & Gift-Receiving Love Languages Compatible?
By Lexi Inks
The Differences Between Polyamory & Open Relationships
By Lexi Inks
The 19 Best Tweets & Memes About Bisexual Awareness Week
By Lexi Inks
Get Even More From Bustle — Sign Up For The Newsletter