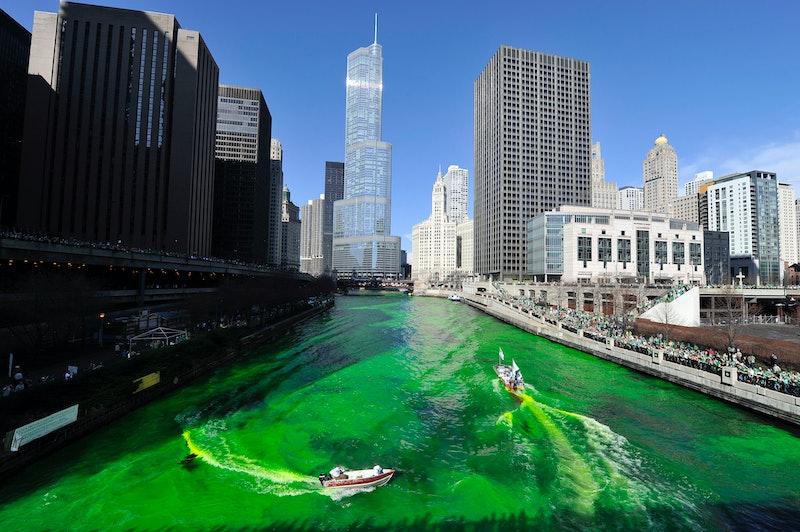 I'll be honest: I'm not exactly sure what I was expecting… but this wasn't it. I mean, when you stop to think about it for a moment, it's really the only way you conceivably could dye an entire river the color of shamrocks… and yet.

I'll admit that I was hoping for something a little more… magical. Theories I've had over the years include, but are not limited to:

But here's how they actually do it. Are you ready for this? I captured it in GIF form for you, just so you could see the single most important moment of the whole process. Are you sure you're ready? OK. Here we go:

...And that's it. A little boat zips out over the water, trailing green dye behind it as it goes. It turns makes a U-turn before running right back the way it came. And then it does it over… and over… and over again.

So at least there's that. After somewhere in the neighborhood of 45 pounds of dye have been shot through the river, it starts to look like this:

Fun fact: The very first time the river got dyed green was actually an accident. According to a story published in the Fairfield Mirror in 2003, some plumbers attempting to trace illegal substances polluting the river employed green dye in the course of their work; however, the business manager of the Chicago Journeymen Plumbers Local Union No. 130, Stephen Bailey, realized it might be a fun way to celebrate St. Patty's Day. The event is still sponsored by the plumber's union today, although the dye is no longer fluorescent — it's now vegetable-based, because fluorescent dye is terrible for the environment. The Great River Dyeing is always conducted on the Saturday closest to St. Patrick's Day, rather than on the day itself, and takes a few days to dissipate.

Here's the full time lapse video — it's kind of wild, even if it doesn't involve dump trucks or giants. Take a peek: