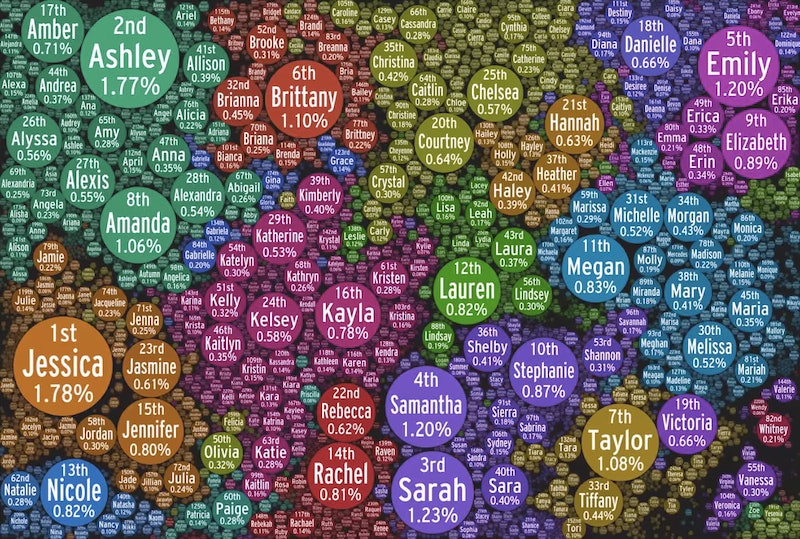 The number of Sarahs you know on Facebook might best be explained by its popularity as a baby named around the time most millennial women were born (right up until the early 2000s, in fact). Those generational “on trend” monikers got a pretty modern makeover in The Evolution of US Girl Names, a video from data anylists Abacaba of bubbled baby names that cover annual reports from as far back as 1880 in one stellar visual experience. Because there’s a time and place for Ruth, and she may not find as many matches in the new millennium as she did in the early 1900s.

Our names (birth-assigned or chosen) are an integral facet of our identity, shaping our sense of self and allowing others to conceptualize our existence. (That’s a little bit of a hazy existential crisis, if you happen to be looking for one.) And wouldn’t you know the world’s most common name in women for the better part of a century was Mary, because Bible. But no longer! "As the role of the extended family, religious rules, and other institutional pressures declines," says sociologist Stanley Lieberson, "choices are increasingly free to be matters of taste."

Here’s how the last century of secular and taste-driven naming pans out per decade:

1915: Mary will remain number one until the mid-20th century, but Helen and Dorothy close behind.

1925: Dorothy and Helen bounce back and forth for about a decade until that damn Betty rolls through and knocks Helen out of the top three.

1935: Shirley becomes the second most common girls name. Also, A becomes a more common last letter in names than E (though Barbara is the only name on the top ten with an A ending).

1945: Sick of sitting it out on the sidelines, Linda takes the lead (trailed still by that pesky Barbara). Mary’s still hoggin’ numero uno.

1955: For a few years between 1947 and 1953, Linda beat out Mary for most common name given to baby girls. It was the first time Mary had been surpassed for the number one spot since 1880.

1965: Lisa is the most common at 3.30 percent. A revolt against Mary as most common name becomes a full on race to the finish line.

1975: Jennifer takes the cake with a 3.75 percent of baby girls receiving the name.

1985: Jessica overtakes Jennifer for the number one spot. Also, Amber becomes the most popular gemstone name for girls.

1995: Jessica still holds the number one spot, but is nearly tied with Emily and Ashley.

2005: Emily remains number one for almost ten years. And as the video points out, palindromic names Ava and Hannah both enter the top 10.

Present day: Ending two years ago, the video concludes with the most popular girl’s name as Sophia, closely followed by Emma and Olivia (no doubt after our favorite detectives Dunham and Benson).

Here’s how you and all your girlfriends compare in the census: