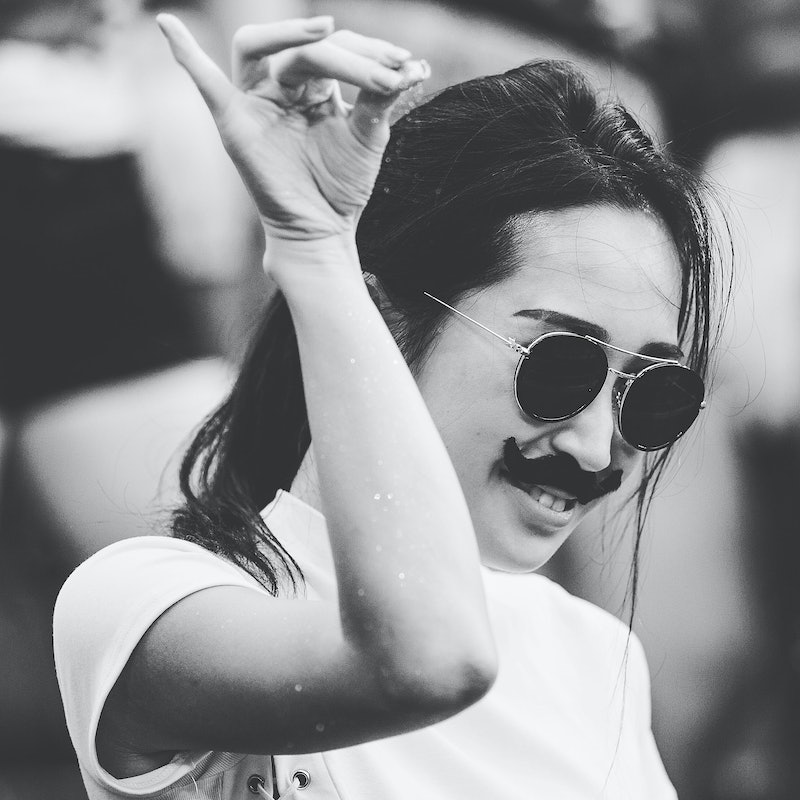 At this point, there's nothing new about being a hipster — the subculture of self-consciously casual coolness has come to dominate mainstream style over the past decade or so. But certain aspects of hipsterdom — the giant lumberjack beard, or the ubiquitous fixie bike — seem to come out of nowhere. What makes a hipster trend explode in the public consciousness? And what sociopolitical urges do these trends feed on?

Academic examination of hipster culture really bloomed in the '90s, when the first hipsters started to take hold in places like Brooklyn. Hipster culture has been analyzed by theorists and described as everything from a cherrypicking of all the fringe movements throughout history to a self-hating subculture that refuses to admit its own existence. These days, with mass-market media like Girls taking on the hilarities of hipsterism, hipsters seem easy to pinpoint: big glasses, vintage books, artisanal coffee, weekend classes on how to make your own jam? Check, check, check, and check. Congratulations, you're a hipster!

But just looking at the external symbols of hipsterdom doesn't identity the real — and often very interesting — motivations behind hipster desires and trends. Hipsterism, like many other subcultures, actually presents us with a great opportunity to reflect on a struggle that most of us deal with every day: the challenge of trying to carve a unique identity in today's huge, expensive, ecologically damaging world.

Here are the real — and sometimes surprising — origins behind six of the biggest hipster trends.

1. The Return Of The Beard

Why It Emerged: There are several theories about why fashion trends have favored large, full beards over the past several years. Scientists say that that the sudden surge in the beard popularity is simply a matter of beards being uncommon: fashions in facial hair tend to become popular because they're rare or unusual, which helps the trend-wearer stand out. This is why theorists now think the age of the hipster beard is over — because beards are now too popular. But there's more to it than that.

Over the past 50 years, beards have often been seen as part of the counterculture — like in the '60s, where beards were meant to separate hippies from the shaved salarymen who wore pinstriped suits and worked for The Man, in offices that would never tolerate long facial hair.

What It Symbolizes: A full beard symbolizes more than just that your values may not sync with the mainstream — it also symbolizes what kind of work you do. The boom in beards has developed side-by-side with the popularity of more casual, "modern" workplaces since the dot-com boom of the 2000s. Google, Facebook, Apple and other similar companies pride themselves on their friendly, relaxed vibe, where innovation and individuality are (supposedly) prized over suits and ties — and many internet workers sport beards. Beards, in this theory, are more as sign of offbeat success than of traditional rebellion.

Beards are also tied to the revival of a certain kind of old-fashioned, "rustic" masculinity. After the well-clipped metrosexual trend of the 2000s, the beard returned with a bang; the Huffington Post recently called it "the rise of the lumbersexual." Full beards come from the same urges that drive the Etsy boom: a love of the handmade and the simple life, a return to the wild after maxing out with the excesses of technology.

Why It Emerged: What twee expert Marc Spitz called "the gentle revolution" in hipsterism — a proliferation of unthreatening, childlike, quietly cute trends, from putting birds on things to Zooey Deschanel to Wes Anderson films — has become the driving force in hipster aesthetics. Hard irony has been replaced by soft enthusiasm, owls, retro Christmas decorations, pompom hats and pocket watches on necklaces. Why? Because of a drive towards opting-out of adulthood and an opting-in to childish things.

What It Symbolizes: Hipsterism, according to a famous article published by Rob Horning in 2009, is the ultimate last gasp of postmodernism: a pastiche of all the aesthetic parts from other decades, to the point where it's simply too exhausting to be ironic any more. And twee culture isn't ironic at all: it's entirely enthusiastic. Tweeness is all about rejecting the trappings of an adult life for the safer, sweeter, more ethical playground of childhood, with what James Parker at the Atlantic called its "teeny-weeny totems and teeny-weeny taboos."

Or as R. Jay Magill, in his book Sincerity, explains : "the uncivilized child, nature, and the antisocial character continue to inspire hipster culture ... These are the go-to figures because both child and outsider live freely, the Romantics say, unhampered by the pestering superego that hounds the well-to-do. Civilisation has not yet dampened their vital and honest instincts." On a basic level, this means that we're all just trying not to become old fogies with mortgages who've bought into the capitalist world (or, more strictly speaking, our parents).

This is partially why the stylized-yet-cute artistic style of the '60s is the mode du jour for hipster birthday cards, lettering and branding. (Fonts are still very 1800s, for their air of handmade pre-industrial cool.) It's too oddball to look mass-produced, and its simple lines are a reminder of an idealized childhood.

Why It Emerged: The New York Times pinned the reason for the return of mason jars, a storage jar originally used to store jams and preserves until it was repurposed as a hipster drinking vessel, down to one word: authenticity.

What It Symbolizes: Drinking out of mason jars means many things — an antidote to the hyper-regulated glassware of fussy grown-up tables, a whatever's-to-hand mentality, a return to the roots of food-making — that hipsters adore.

A marketing head at Jarden Home Brands (who's given interviews to everybody from the New York Times to ThinkProgress to try and explain the trend) identified the mason jar's popularity as "a perfect storm of different factors," from economic depression to DIY culture.

“In times when the economy is not so great, people turn to nostalgic things. It’s appealing to know these enduring symbols," he said. It's this nostalgia coupled with casual appeal — a rebellion against adult dinner tables, with their matched sets of knives and delicate, fussy glasses — that have made the mason jar so trendy.

Why It Emerged: For hipster women in particular, knitting, embroidery and other retro-feminine pursuits are having a massive boom. Part of this is due to the economy: in an environment when it's hard to afford new clothes and gifts, it's way more practical to make your own. Another part, however, is a rejection of capitalism, with its sweatshops and pollution, for a "more credible" handmade reality.

The home of this hipster trend has to be Etsy — which is having its own struggle marrying its down-home handmade aesthetic with the demands of being a wildly successful capitalist enterprise, as the New York Times recently reported.

What It Symbolizes: The trend is also about rejecting an economy built on processes we once did by hand. To go back to R. Jay Magill, he points out: "Wistfully remembering and preserving newly obsolete cultural objects ... is a way to say No, to resist the new, to turn back from what feels like a forward movement into an increasingly dark future."

We're deliberately undoing the Industrial Revolution and its weaving machines, going back to the very beginning before things apparently went off the rails. It's also a way of showing off our privilege: we're just wealthy enough to opt out of Walmart and Target. Go us.

Why It Emerged: The rise in down-home retro food — hot dogs! Pulled pork in every conceivable form! Grits! — might seem like a justifiable reaction against the fussiness of gourmet foams and molecular whatsits. But its hipster appeal has a deeper reasoning. Food with less "elite" cultural cache (from burgers to poutine) shows off the eater's open-mindedness, their refusal to bow to restaurants and "adult" foods. It's also seen as a return to roots, to authentic Americana cuisine that links us to a more charming, land-based past. And yes, that is just as condescending as it sounds.

Craft beer has its own explanation. On a basic level, it's the same thinking behind knitting your own scarves from locally-sourced wool or shopping at a farmer's market: supporting small, authentic producers who are passionate (and ethical) about what they do, rather than part of the Big Capitalist Machine. It's what Shortlist Magazine calls "artisan thinking": local, organic ingredients and the preservation of a set of ancient skills (we've been making beer as a species since 4000 BC). This is an area where the hipster consumer's taste has spilled out onto the mainstream — there are officially now 2,592 craft beer brands in the U.S.

What It Symbolizes: It's all part of the "return to the wild" hipster trend, placing it alongside urban bee-keeping and pickling your own preserves. It's now a general joke that Henry Thoreau, who famously threw up urban life to go live by Walden Pond, was "the first hipster." The reasoning is pretty clear: anything that brings us closer to an idealized experience of life in touch with the land, being self-reliant and embracing traditional skills, is a good thing.

It's part-Swiss Family Robinson fantasy, part-authentic rejection of capitalist values, and part-looking superior to other people. This only really became a hipster trend in the early 2010s, and we're still trying to pinpoint why: was it the sudden cheapness of organic produce, the slow food movement, the unaffordable nature of urban life, the critical mass of bad news about the environment, or a combination of all of them?

Why It Emerged: The reasoning behind the boom in fixed-gear bikes (i.e. bikes that don't have multiple gears and don't let you coast along) is a pretty ferociously debated one among hipster types. My husband (who loves vinyl and can talk about artisanal coffee for a week, and is therefore an insider hipster perspective on some matters) called its appeal part of the "cult of simplicity."

In fact, this trend was likely modeled after the freewheeling, slightly-dangerous vagabond lifestyle of the bike messenger. Fixies are the bike of choice for urban bike messengers in New York, perfect for weaving in and out of traffic at high speed — so they've got a certain gritty foundation.

What It Symbolizes: Fixies, as they're called, were one of the first kinds of bikes to be invented, which gives points for vintage cred; but their main appeal for hipsters appears to be their serious simplicty. Lovers of the fixie claim that it's a more "authentic" riding experience (there's that word again) that brings you in close contact with your surroundings, and they're also easy to customize with retro accessories like cards in the spokes and 1920s-looking saddles.

They're the ultimate hipster traveling machine: environmentally-friendly, cheap, authentically urban, vintage-sourced, vaguely childlike, and able to make your workplace commute look far cooler than those bores on the bus.

More like this
Everything You Need To Know About Ephemeral Tattoos
By El Hunt
How To Get Your Hands On The Pat McGrath X Supreme Nail Kit
By Justine Knight
Prefer Alcohol-Free Perfumes? Water-Based Fragrances Are On The Rise
By Audrey Noble
12 Absolutely Angelic Cherub Tattoo Designs
By Paris Giles
Get Even More From Bustle — Sign Up For The Newsletter