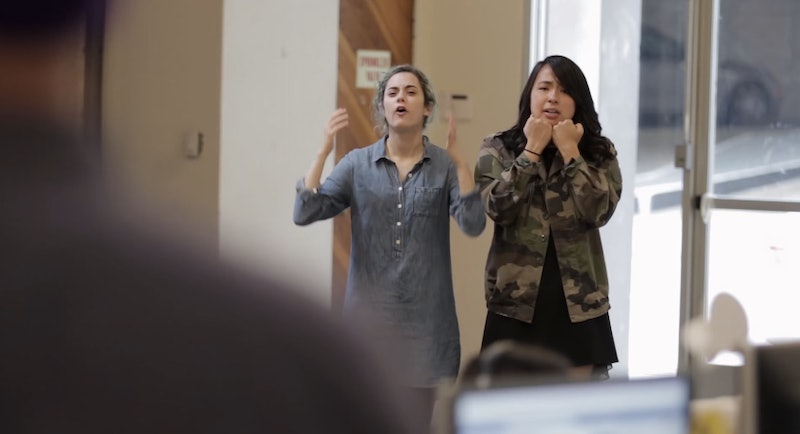 Girls have a pretty good idea of what we think guys are saying when we can't hear them. It's from years of experience, the inherent truth of many stereotypes, and our gut instinct. Buzzfeed's new video addresses what girls think guys are saying with some humorous clichés. As two women watch two male co-workers converse, they have the conversation they think the guys are saying and—spoiler alert—it revolves around sports and boobs. While I have no doubt that the average man talks about sports (of course, not all men, but you can definitely expect the median base line of dude-versation is a sporting one), the boob talk is a little bit off point. Men definitely discuss sporting plays in depth, but if you've ever been privy to a conversation wherein the average male talks about women, it's fairly un-descriptive and brief: "She's hot," which is replied to with a, "Yeah." The idea that the average man discusses a woman's breasts in detail is very '90s, and I think now only reserved to a certain type of guy. That's just my opinion anyway.

The tables turn and the guys in the video imagine what the girls are saying, which is something about periods. I really WANT to be mad about that, but the amount of period chat I have with my girlfriends makes me part of the problem. But when roughly one quarter of our year is spent bleeding, what do you expect? Period chat is as necessary as having a period. So yeah, gender stereotypes are sometimes real, but that's not necessarily a bad thing. Many of them are based in actual facts of life.

The video also serves to highlight how ridiculous it is when the men and women try to figure each other out. We're all people, and essentially not that difficult to figure out (considering both teams in this video were just about right in their guesses). Watch below and have a giggle, because you KNOW you've had this conversation about what someone of the opposite sex was having before:

Because I don't think the boob talk is as necessarily relevant anymore (at least not in that detail, among most non-12-year-old men), because most of the guys I know would prefer to discuss drone technology at length (no seriously, none of my friends are cool) than boobs, and because as guys get older they're not as dumbfounded over flesh as they were when they were 20, here are 5 things I think guys today would discuss more regularly than female breasts:

2. Drones (duh)—getting a drone, flying a drone, making a video with a GoPro and a flying drone

3. What they ate on the weekend

5. Something to do with X-Box or whatever their console of choice is