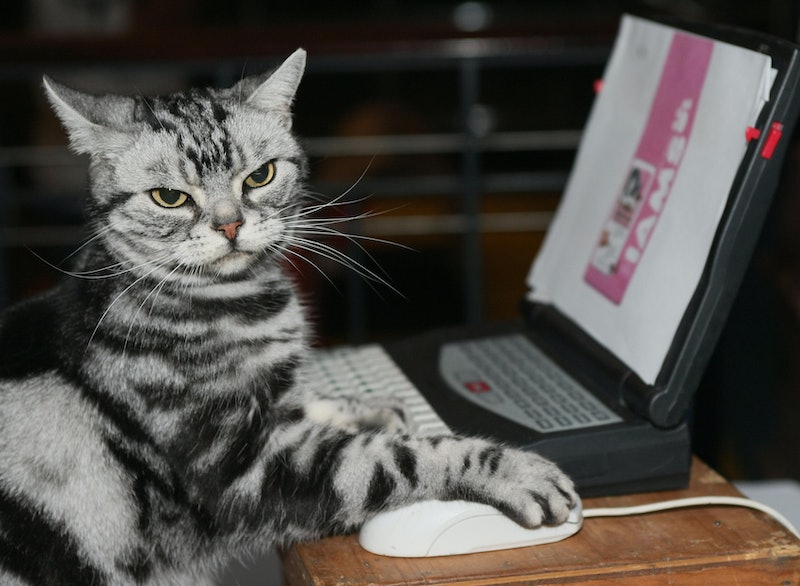 As a cat person myself, I feel I can speak for most of us when I say the following: Even though we find feline friends among the best possible friends, we totally get and expect those same kitten babies to essentially exist as live-in frenemies. We love them, we know they love us, but there is always a very real awareness that one wrong stop from either side could temporarily sour the relationship—and when cats are pissed, they don't play. Maybe we forgot they most appreciate breakfast served at 5AM and selfishly planned instead to sleep until 5:15AM without seeing to it that this preference is met. Or perhaps we went to work for eight hours instead of finding a job that allows working-from-home so we may stimulate our cats with cardio-intensive chases around the apartment. Or we could be dumb enough to do something like this guy who thought kicking his cat (and playing acoustic guitar while wearing sunglasses indoors) was a good idea. I feel thankful for this kitty pal for keeping dude in check—and boy is this budding Dave Matthews dragged back to humility by his fluffy cat's act of karmic justice.

I wouldn't say anyone deserves to be hit in the head with a potted plant, but some people don't not deserve it. For example, this guy. Please note his rough removal of the previously serene feline roommate. Like, be chill, dude. You're wearing sunglasses indoors. Fully embrace the part if you're gonna go that far for starters. Anyway, have a glimpse and see what I mean:

Some viewers speculate the whole fiasco was fabricated. They point to the fact the plant just two steps above the temporarily airborne one remains untampered, despite the cat's furious sprint upstairs. I suppose that could be evidence, but I've had a cat roomie for 27 years now and I know their movements are not always graceful, or explainable. One fluffy cat monster I had in college would regularly dump her water bowl on the kitchen floor and somehow spread it out to cover the entire surface, no matter how little water was in there to start with. My current cat, Kevin, mysteriously locates and destroys receipts. I can't ever hope to understand either of these events, and I might add this angry cat's tale to the list.

But, I will say, someone who rocks those shades and kicks a cat out of the way? Well, he might have just been nutty enough to actually orchestrate the whole thing after all. Seriously, dude, be nicer to your cat. And get advice on sunglasses before purchasing.