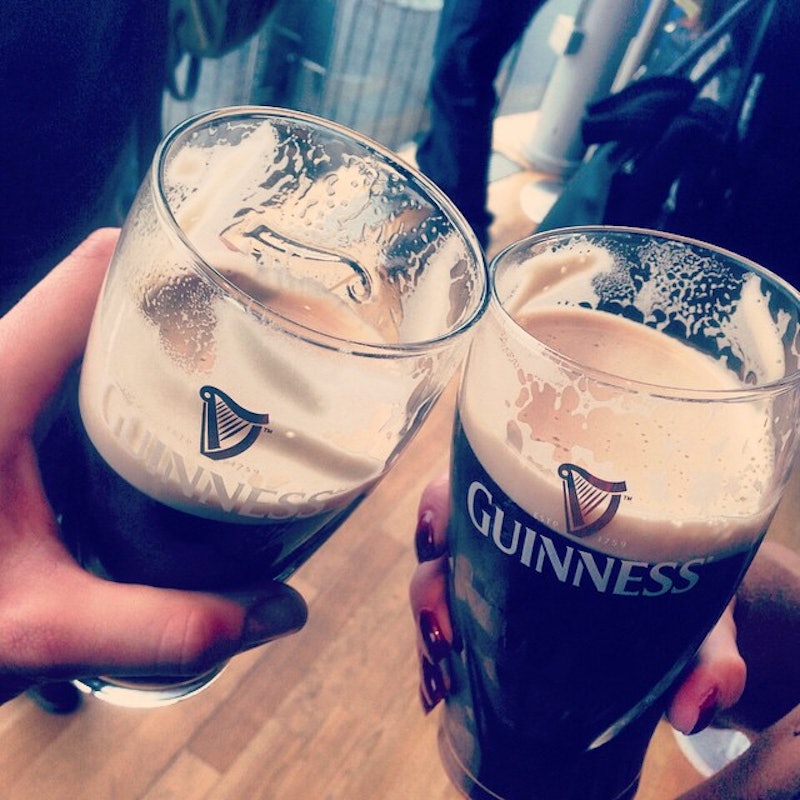 In case you missed the green-colored memo, today is St. Patrick's Day. All around the country — heck, more like the world — people are participating in parades, feasting on traditional Irish fare, and, for those over the age of 21, sipping on a stout. Even if you have to spend your St. Patrick's Day at the office, you probably plan on grabbing a pint with your pals after work. But if your friends are some of the lucky few who have been drinking the day away, then you may be shocked by the people you see at the bar once it's time for you to join in on the festivities too.

It's not that your friends have altered their appearance. (Well, unless painting their faces green constitutes a change.) Rather, their personalities have undergone a St. Patrick's Day makeover. When you combine warm weather, a party-like atmosphere, and an overabundance of alcohol, moods shift and people transform into their drunken doppelgängers. Suddenly the shy girl won't shut up, the peaceful guy is throwing punches, and the partier is buying shots (OK, some people remain the same).

So before you head to the bar tonight, study up on your friends' St. Patrick’s Day personalities. Some will excite you. Others will annoy you. And all of them will be gone by tomorrow morning. Or, at least, once the hangover wears off.

Someone get this girl a megaphone. Actually, come to think of it, she doesn't need one. Your buddy is so excited for the festivities, you can hear her over a band of bagpipers. Even when her voice is gone, which probably happened around noon, her St. Paddy's Day spirit will still march on.

Until today, you didn’t know much about this friend’s heritage. But when he shows up at the bar looking like an Irish flag and bragging about his drinking abilities, you quickly figure out where the roots of his family tree lie.

No, her tears have nothing to do with the holiday. At least, not directly. She's simply had a few too many shots of whiskey. To help her return to a happier state of mind, just remind her that she's an amazing gal. And if that fails, take her to McDonald’s for a shamrock shake.

After a Guinness or two, he's ready to take on any challenge. Whether it's belting out an off-key version of "Danny Boy," doing a backflip off of the bar, or letting an equally drunk buddy punch him in the nuts, this guy will do just about anything you ask.

Irish or not, this lad won't stop till he's locked lips with every lady in the bar. And just in case his intentions weren't obvious enough, he's decided to don a button with the holiday's most beloved slogan. You keep it classy bro.

This friend refuses to leave your side... because she can't walk in a straight line without your support. But you can’t blame it all on the alcohol. Her viridescent heels are contributing to the problem as well.

7. The Friend Who's A Little Too Honest

The holidays are a time to tell people how we really feel, right? Well, not when booze is involved. Sadly, this friend didn't get the memo and has decided to share her "honest" opinion with every person at the bar. Here's hoping she still has some friends left by the end of the night. .

This bro gives new meaning to the phrase "the fighting Irish." Even though no one in the bar has offended him, he keeps asking people if they want to take it outside. So far everyone has ignored his empty threats, but it's only a matter of time before a former boxer takes him up on the offer

She's the one friend who has managed to stay sober during your daylong bar crawl. Although she'd never stop a good time, she constantly reminds your crew to stay hydrated and stay away from the douchebags. At the time you're annoyed, but know you'll be grateful for her advice come tomorrow morning

10. The Person Who Will Eat Anything

All that beer has left her hankering for some of St. Paddy's finest fare. But even after a plate full of corned beef and an assortment of St. Patrick's Day sweets, she still wants more.

He's been drinking since dawn and refuses to quit till he's been to every bar in town. He starts to fade about halfway through the day, but he quickly bounces back after "letting it go" in the bathroom. Clearly, you can't keep this guy down.

More like this
10 Pumpkin Recipes That Are Way More Creative Than Pie & Lattes
By Rebecca Deczynski and Alexis Morillo
Bennifer, Kravis, & 14 Other Fun Celeb Couples Halloween Costume Ideas
By Emma Carey and Brittany Leitner
7 Symbolic Meanings Of Autumn — From Letting Go To Self Preservation
By Kirsten Nunez
6 'Game Of Thrones' Halloween Costumes That Aren't Overdone
By Nina Kahn
Get Even More From Bustle — Sign Up For The Newsletter