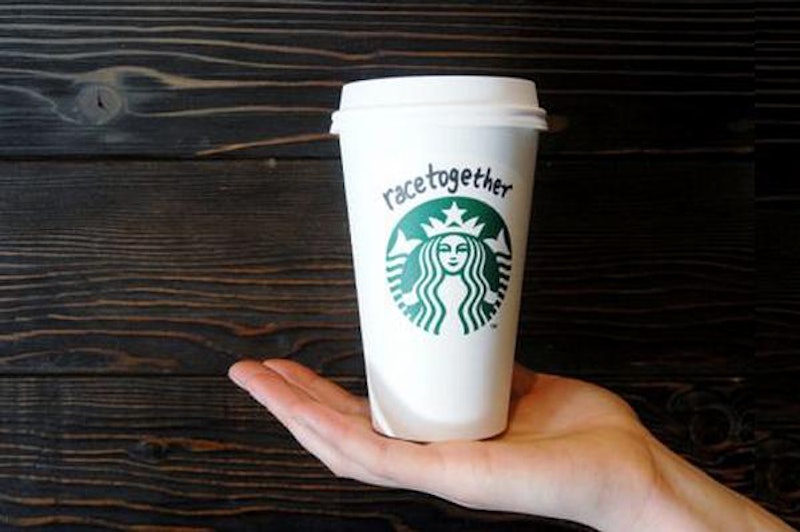 You've probably heard about it by now, but just in case you haven't, there's been a bit of a hullabaloo today surrounding Starbucks — although not because of a new beverage or menu offering. No, this outcry is in response to the Starbucks “Race Together” campaign (and its corresponding hashtag, #RaceTogether). Basically, the company has decided to try to solve the huge problem of racism in America… by writing a couple of words on a cup and hoping for the best.

And yes, the world is responding pretty much exactly like you're thinking it is.

Back and December, Starbucks CEO Howard Schultz called a meeting of Starbucks Partners to discuss the issue of race in America. The result of that meeting is apparently the Race Together campaign, which was launched yesterday. The campaign involves baristas writing the words “race together” on random customers' cups in order to start a conversation about race with them. Because the exchange that occurs between a barista and a customer when one has a line stretching out the door and the other is already running late is the perfect time to get into a serious conversation about a serious issue with a complete stranger.

As you might expect, the overwhelming response has been, “Worst. Idea. EVER.”

Look. I think their hearts are in the right places. Racism — casual, systemic, and more — continues to be a huge problem in this country, and I realize that they're trying to help, not hinder. But, at best, Race Together is extraordinarily misguided. There are so many ways in which it go so very wrong, so very quickly — or, as Jia Tolentino at Jezebel puts it, “Really, how might they imagine this going down? 'Crazy about all that racism out there,' the barista will say to the customer. No matter what the customer replies, it'll be fucking horrible.” Tolentino goes on to comment that the very act of ordering coffee from a chain is “an act that necessarily takes place under conditions — quick, perfunctory, corporately polite — that are exactly oppositional to the conditions necessary to talk about race.” Furthermore, as this Twitter user (along with many others) points out:

Vocativ's Sarah Kaufman compares Race Together to McDonald's unfortunate “Pay With Lovin'” campaign, which involved customers being “selected” to pay for their order with some sort of act of “love” — hugging a stranger, calling their mom, and so on and so forth. It did not end well, and neither, likely, neither will Race Together. “Sharing your thoughts on race with a barista is likely to be as awkward as hugging a stranger for a Big Mac,” writes Kaufman. Possibly even more so.

Naturally, the Twittersphere has a lot to say about the whole thing — and many of the thoughts aired on the social network are excellent points. These tweets point out pretty much everything that's wrong with the campaign:

Yes, do let's promote a campaign geared towards talking about race in America with only the hands of white people. That won't go over poorly at all.

2. The Potential For Awful, Terrible “Jokes” That Are Not Really Jokes At All

It's going to happen, because many people are terrible and this campaign just gave them a new and horrible way to spread their terribleness.

Yeah. You know what would probably help more? Allowing the public to sit down and chat with the people in power about race in America. You don't get to just outsource it to make yourselves feel better about it.

I'm not generally a fan of throwing the word “HYPOCRIT!” in people's faces whenever they say something I don't like; I think it's often trotted out as a means of derailing an argument, and therefore an infuriating and unhelpful response. However, the fact that the arrival of a Starbucks is often a sign of gentrification (which in turn pushes out the occupying demographic of an area in favor of a wealthier, and usually whiter, one) is kind of at odds with the idea of the company trying to “solve” racism. The two things don't sit comfortably next to one another.

Again, I do think Starbucks has good intentions. But you know what they say about the best-laid plans of mice and coffee chains, and Race Together unfortunately hits all the wrong notes. I don't have a solution to the problem — I wish I did — but the one thing I am sure of is that this is not it.

Maybe it's time to stop trying to change the world by writing things on coffee cups.