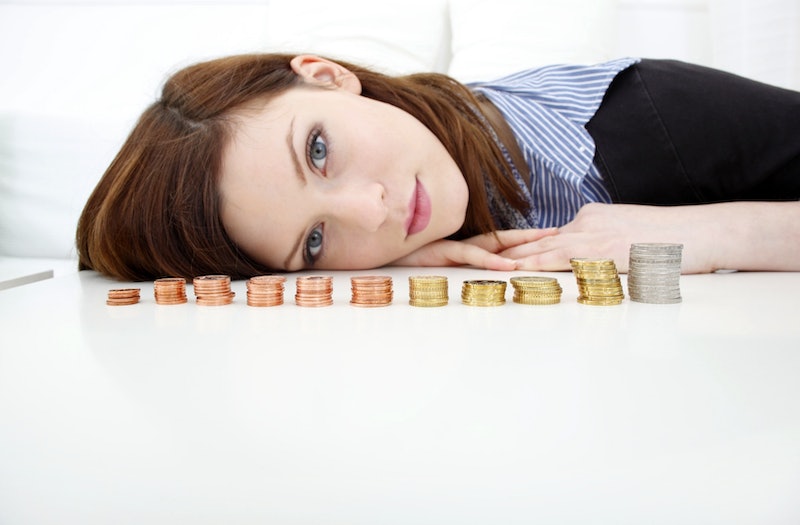 Forbes reports that women are more hesitant to invest their money than men — even highly successful, professional women. Though the Forbes writer doesn’t offer any numbers, she does talk to the (female) Senior Vice President of Retirement at Fidelity investments, who backs up this analysis. The piece also links to a single Fidelity study which (sort of) supports their claim.

So is it true? Are women less likely to invest their money and more likely to let it sit in a savings account, gathering 1% interest? And is the cause, as Forbes repeatedly tries to tell us, that women are just scared and clueless when it comes to investing?

Well, without real numbers it’s impossible to say for sure, of course, but even assuming that it’s true that women invest less often, the idea that women are universally too chicken to put their money in the market is kind of insulting, especially with only anecdotal evidence.

Maybe women are nervous about investing because they are less likely to have had someone teach them about it. Maybe they (rightly) see Wall Street as an boys club and don’t want to associate with it or just haven’t found someone they trust to handle their money.

Then again, maybe women are just socialized in such a way they are less likely to constantly feel that they should be earning more and more and more. Maybe women are taught accommodation and acceptance so much that even the go-getters and the highly successful are more likely to just be happy with what they have. Maybe having broken barriers and achieved success despite the odds, successful women are sufficiently impressed with where they are already.

It’s also possible women are smart not to invest right now. After all, women investors tend to be better than men anyway. Maybe they see something in the current market that men would do well to pay attention to.

Or maybe women aren’t even investing less than men at all. After all, Forbes’s data here is pretty thin. Like, cellophane thin. I mean, if you’re going to make unqualified generalizations about half the country, you should probably have more than one analysis of one company’s investors to fall back on.

More like this
Who’s The Richest 'Grey’s Anatomy' Star? See The Net Worth Of Each Cast Member
By Hugh McIntyre
Shonda Rhimes' Net Worth Makes Her One Of The Wealthiest People In TV History
By Hugh McIntyre
How Much Are The 'Schitt’s Creek' Stars Worth?
By Hugh McIntyre
What Is Miles Teller’s Net Worth? The 'SNL' Host's Bank Account Is No Joke
By Meg Walters
Get Even More From Bustle — Sign Up For The Newsletter