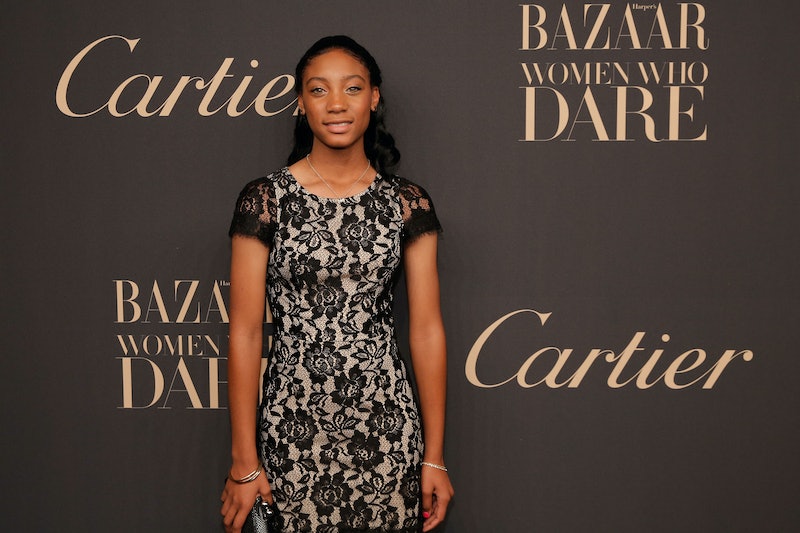 It's not everyday that I get excited about clothing designed by a teenager. No offense to Bethany Mota, but even though I am sort of in love with teenage girl culture and endlessly inspired by teen girls, I really like dressing like some version of an adult. However, I'm definitely thrilled about 13-year-old Little League superstar Mo'ne Davis's new shoe collection. Yes, the dynamo who reminded us last year that "throwing like a girl" was a badge of honor rather than an insult and who covered Sports Illustrated, has a shoe line out.

The line, for shoe company M4D3, includes three styles of sneakers that have been made in adult and child sizes, to fit her fans of all ages. The shoes are definitely inspired by Mo'ne's dominance on the mound with baseball-style stitching and are perfect for this year's athleisure trend.

But the kicks will also do some good in the world: 15 percent of proceeds will be donated to Plan International's "Because I Am A Girl" Campaign that works to empower marginalized girls in poverty across the globe. "Together with Mo'ne, we are designing a shoe that represents who she is; contemporary, spirited and athletic, but at the same time being very caring towards other girls and young women that are vulnerable around the world," M4D3 spokesperson Lisa Zbitnew said in a statement. As far as shoes go, I'm not sure there's much more that you could ask for.

I'll be honest — when I first read that Davis had designed a line of shoes, I was initially disinterested, evening rolling my eyes. Of course a young female athlete had been asked to do this. Because a girl can't just be an athlete without having everything made to be about her appearance/fashion. What kind of message is that sending?

But then I slowed down and realized that it's actually sending a pretty great message to teenage girls — something that I champion day in and day out: That you can still be a serious, smart, talented, accomplished woman who simultaneously cares about fashion. Who's to say that Davis wasn't presented with a bevy of projects and this was the one she picked? Why should she not be allowed to care about sports and shoes? She can and she should be able to be both of those things at once — and so should all girls.

I can tell you that my friends and I talked about hairstyles, clothes and boys as well as strategies on our way to and from baseball games when I was her age. It did not make me any less competitive on the diamond or any less of a "real" athlete. It made me a multi-faceted human being with a variety of interests and the ability to be more than one singular thing. Fashion isn't just frivolity that's "beneath" the attention of an activist, an intellectual, or an athlete.

Chimamanda Ngozi Adichie's essay, "Why Can't A Smart Woman Love Fashion?" was a revelation for me when I read it and nails this down perfectly:

"I had learned a lesson about Western culture: Women who wanted to be taken seriously were supposed to substantiate their seriousness with a studied indifference to appearance. For serious women writers in particular, it was better not to dress well at all, and if you did, then it was best to pretend that you had not put much thought into it. If you spoke of fashion, it had to be either with apology or with the slightest of sneers."

While watching last night's episode of ABC Family's The Fosters (I told you I love teen culture), one of the characters quits the dance team because she feels like dancing in a sexy manner is causing the guys in her coding club to take her less seriously. Mariana, a pretty badass character, fires back that it's possible to enjoy doing both: being sexy and being smart.

This was definitely not the messaging that I was receiving as a teenager and it's so encouraging that it's now coming to them from all angles. While I'm still ever-so-aware of the male gaze, diet culture, racism, and other dangerous ways that young girls are told that their appearance is all there is, it's nice to see that at least some of the messaging around girls who care about fashion and cosmetics being vapid has been scrapped.

So, bring on those sneakers Mo'ne Davis and let's usher in the new generation of girls who can do and care about whatever they want. They're definitely more than ready for it.

More like this
Isa Guha Is Taking The Lead
By Charlie Mock
Women Around The World Are Cutting Their Hair In Solidarity With Mahsa Amini
By Darshita Goyal
The 8 Best Fitbit Bands For Sensitive Skin
By Lauren Moison
Prefer Alcohol-Free Perfumes? Water-Based Fragrances Are On The Rise
By Audrey Noble
Get Even More From Bustle — Sign Up For The Newsletter