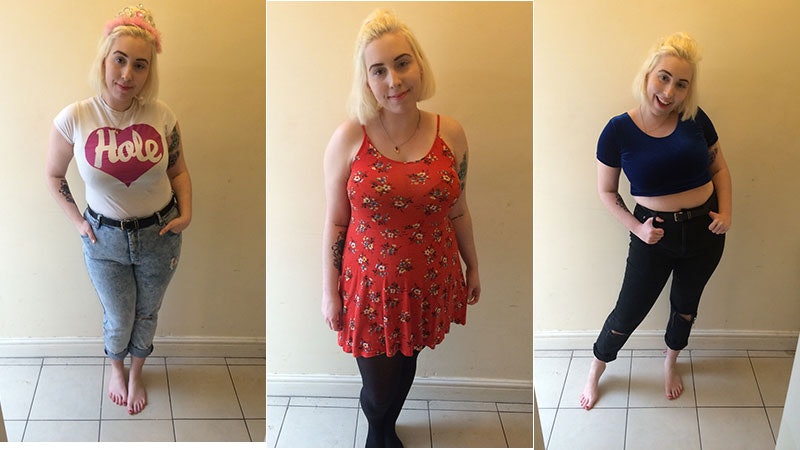 It all started a few weeks ago, when my roommates and I were discussing underwear and I revealed that I hadn’t bought any new panties in a couple of years. I didn’t realize that this would be such a big reveal until I was met with looks of panic, shock and disgust. Buying new underwear is a practice most women flock to every couple of months, after all (even if guys can keep their boxers for around seven years). Partially due to how freaking cute new underwear is, how confident you feel when you have your sex panties on and probably due to imagined concepts of hygiene, too.

I had never gone commando before (except for a few forays into running to the shop in leggings and a massive sweater) but as a sex-posi babe, I was surprised at my own aversion to it. Why hadn’t I attempted to copy the B in Apartment 23 and become Tall Slut, No Panties?

For one week, I would wear no panties. I still allowed myself bras and tights because I’m not a heathen and it’s absolutely freezing at the moment. I would continue to wear a variety of outfits (as I usually do) and not let my decision to go pantless affect any other decisions in my very exciting, everyday life. Essentially, the only aspect of my lifestyle I would change was going to be my underwear — or lack thereof — and to see if this change affected my lifestyle at all.

On my first day of no undies, I opted for a dress and tights. Logically, I reasoned, the airiness of my outfit would keep my vag healthy and happy. The world was its oyster, no holding back, no restrictions of lace. I had university classes to go to but I chose not to go in — although this had no connection to my state of undress, but rather my own sheer laziness. A laziness that was rather enjoying the thought of not having to do as much laundry due to the lack of panties.

I had work that evening (kidswear at H&M) and I felt like a liberated weirdo. As I had never gone panty-less before, I was extremely aware of my own lack of panty protection. I was also very aware of how short my dress was and how unacceptable it felt to be commando in my work environment. At the same time, I loved my (literal) dirty little secret. It’s a very simple way to feel like a deviant without going through all the effort of cheating on your husband or killing your ex-best friend.

I also ended up going out drinking after work and with excessive amounts of alcohol, I completely forgot that I was going commando. However, I’m sure the feeling of freedom was one that drunk me rather enjoyed (she’s a very liberal kind of gal).

I awoke to day two with a horrendous hangover and a want for the whole world to end so I wouldn’t have to go to work. Not wearing panties was not something that I had to think about that morning — I was focusing more on not being sick on myself and trying not to die.

Honestly, I completely forgot that I was going commando until I went to the bathroom, and when I was shopping after work and one of the Benefit makeup artists told me that my skirt was tucked into my tights. As an avid thong wearer, if I had been wearing panties it would have made little difference; the whole shopping center would have witnessed the entirety of my ass crack either way. I was honestly too hungover to give a shit about most things on day two, let alone my experimentations into underwear.

It would be all too easy for me to lie about my week going commando and pretend I did it all week, but as a pioneer in panty-less-ness, I have to be honest. On day three I wanted to wear an amazing dress I got in the H&M sale for $5 (when doesn’t H&M have a sale?) but I also needed to wear panties with it — partially because underneath the floor-length sheer skirt was only a mini skirt and I didn’t want to wear tights, partially because I use my panties to silhouette my VBO (visible belly outline).

I can promise you, I looked slamming and the sacrifice to my experiment was fully justified. However, after two days without panties, the adjustment to wearing them again — having to pull them out of my crack again — was hard to get used to. As my panties had become extremely noticeable and irritating to me, I considered a future where one day I would give them up altogether.

During the day, I went for tights and a dress again — I’m getting a little predictable here — and had a pretty uneventful day for a commando commander. Yet I picked up a lot more excitement in the evening, when at 11 p.m. I rang one of my besties to demand she let me accompany her on a night out. On a night when one floor of the venue was themed "Paramore vs. My Chemical Romance" and the other was "Lady Gaga vs. Britney," how could I ever consider not going to that? I donned a teeny tiny bralette and a sequined pencil skirt to hide my panty-less state and show off my exquisite breasts.

The worst thing about being so hungover — the thing that practically makes you vomit into your bedside bin — isn’t not wearing underwear but having to go to work for six hours. However, the no panties problem still stuck with me throughout the day as I considered the likeliness of having a bowl accident and the lack of layers to deal with such a situation. As it turned out, I didn’t poo myself and not wearing underwear made my leggings as pants look feel more comfortable and look cuter IMO.

On the sixth day of commando week, my true love said to me, try wearing something other than tights to give legitimacy to your experiment. I wore my favorite pair of mom jeans on day six — a look I’d been purposefully avoiding due to a terror about a rough denim texture against my lady garden. In reality, due to the loose style of mom jeans and my own pubic wig, the jeans didn’t affect my nether regions at all. In fact, due to the lack of tight tights or tight underwear, I felt more vaginally liberated in this outfit than any other. The space around my crotch was freeing in ways I simply cannot describe.

I was kind of sad (not pictured) to reach the end of my experiment and I wish I’d gone out with more of a bang — a "flashing my minge to a bunch of strangers" kind of bang. Instead, I went to work in a different pair of jeans and unleashed a seventh level kind of hell on my vagina. The issues I experienced from my slightly tighter pair of mom jeans (the only other pair of jeans I own, having only recently rediscovered denim due to a previous fear of looking awful in anything that wasn’t a skater skirt) were never ending. DO NOT GO COMMANDO IN TIGHT JEANS. What an awful end to my liberating week of letting my vag wander as free as a very free thing.

Overall, I’d say my foray into the world of going commando left me with a sense that I can be even lazier about my laundry, as it isn’t the end of the world when I run out of panties. I also learned that when growing out your bangs, it's only possible to have one hairstyle that doesn't look horrendous (and maybe it's not this one). For going commando, I also discovered that the choice of outfit for not wearing panties is very important — I REPEAT, DO NOT GO COMMANDO IN TIGHT JEANS! My favorite aspect of this experiment, however, was not the liberation or the ease of wanking, but that if you fart whilst not wearing panties, it makes much less sound.