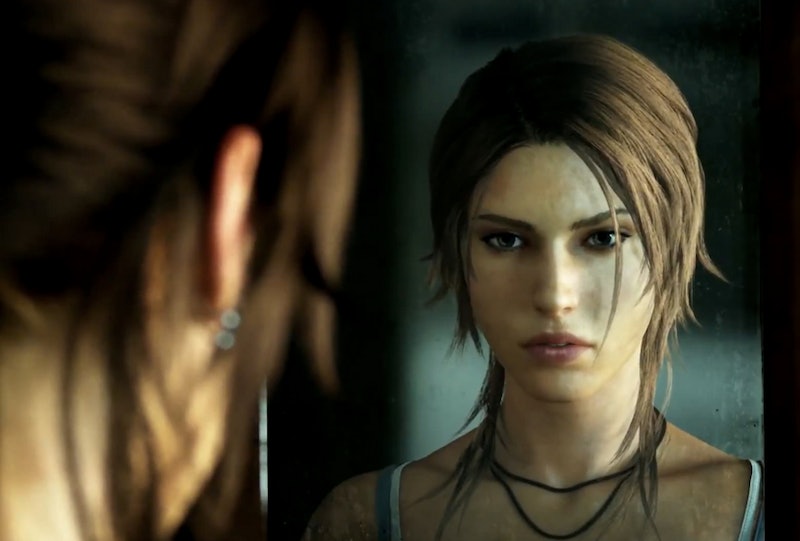 If you've ever stepped foot into an arcade or even a bar, you've probably seen it — a game featuring a little yellow circle with a wide gaping mouth and big eyes, chasing after multicolored ghosts in the pursuit of delicious white dots and the occasional fruit. That little yellow circle is Pac-Man, and he is one of the oldest video game characters in existence. It wasn't that long ago that Pac-Man was considered a graphically advanced video game. But when you look at the kind of games we have now, Pac-Man looks laughably basic (even though we love him anyway).

Nowadays, creating video game characters is no small task. Rather than create geometric graphics and rely on pixels, we use facial and body scanning to map out realistic expressions and motion, along with advanced computer graphic imaging to bring the human (or otherwise) face into full three dimensional realization. This technology has come so far that there are now some video games that are so lifelike, they can be confused for movies (L.A. Noire, Heavy Rain, Last of Us, to name a few). This new movement is called gaming realism — and it's a major part of popular video games today.

On March 9, gaming columnist Naomi Alderman wrote an article for The Guardian entitled, "Video game characters: the more real they get, the less we like them." In it, she discussed how evolving technology has given game creators the ability to make video game characters look frighteningly realistic.

There’s something disturbing about seeing an old and much-beloved videogame (sic) character in a new redesign. Like seeing the movie version of a book you loved, it reveals how much of the character you had imagined, and how other people’s vision of them was very different.

Alderman believes the more realistic a character looks, the less relatable they become to players — and, therefore, the less we like them. She attributes the industry's growing design-your-own-character trend to this singular fact.

Videogames, more than any other medium, rely on the identification between player and the character you’re playing on screen, so the disconnect is even more disturbing than in a movie or novel. It might be partly for this reason that games are increasingly allowing players to design their own characters. After all, if the hero of the game you’re playing is you, there’s nothing more troubling than looking into the screen and not recognising your own face.

And I can see where she's coming from. There's something nice about older video games that have vaguer, more pixelated-looking characters you can easily project yourself on. But Alderman misses the mark on one major point. To me, more realistic video game characters overwhelmingly benefit a group of gamers. That group is women.

The reasoning is fairly simple: Popular culture is starved of realistic portrayals of women. In our books, TV shows, movies, commercials, and more, white, cisgender, thin, able-bodied women are glorified. They are the main characters and love interests of the overwhelming majority of "women's" stories. Video games are no exception to this rule. Despite being around for 57 years, the number of female characters of color who lead video games is devastatingly low. I've been a gamer for 20 years, and I am unable to name ten off the top of my head. This also rings for non-gender conforming, fat, and disabled women.

Female video game characters not only lack diversity, but also realistic physical attributes. Up until recently, Lara Croft has had absurdly large breasts.

If the handful of years since her more real-life-esque redesign make that a moot point, then I submit to you: every female character in the SoulCalibur series.

To survey female game characters on a broad scale is to sail a sea of tiny waists, massive breasts, petite noses, and overly-sexualized outfits.

After all, if the hero of the game you’re playing is you, there’s nothing more troubling than looking into the screen and not recognising (sic) your own face.

Yes, except this is what women have been experiencing from the beginning. We do not see ourselves — our real, complex, cellulite-bearing, and frizzy-haired selves — in video games. We are not represented in any tangible, meaningful way.

Instead, all women and girls are bombarded with these misogynistic and idealized versions of their own sex. Yes, all of them — because if they're not playing video games, they know someone who is, and like countless studies have proven time and time again, we are viscerally, psychologically affected by the images we see in the media. It is estimated that 91 percent of women are unhappy with their bodies. Additionally, up to 8 percent of women suffer from anorexia or bulimia: two disorders that have high comorbidity rates with low self esteem.

And not only are women a "group" of gamers — they're actually the majority. The gaming population actually mirrors the general human population rather well, which is to say, 52 percent of gamers are women, much like 51 percent of people identify as female.

It is video game companies' responsibility to make sure they're portraying women in accurate, healthy ways — just like movie studios, TV show producers, authors, so on and so forth. This starts with realistic characters. The more realistic we get — the less excuses we can make about inadequate technology and the difficulty level of animating women — the closer we get to making video games a safe and constructive space for everyone. Not just women, though they inarguably need it the most.

I believe what Alderman calls a loss of relatable charm is actually just the opposite. The more realistic and flawed the characters in our video games are, the more people will be able to enjoy them, because they offers us a sense of belonging that may have previously not existed. For example, Disney movies have begun starred African-American and Latina princesses after nearly a century without them. And what more rewarding message to give the youngest among us than the idea that someone who looks like them — or anyone, for that matter — can change the world?

More like this
Rupert Grint Just Shared A *Major* Update About Ron Weasley’s Future
By El Hunt
Twitter Is Overjoyed By Angela Bassett’s Record-Making Oscar Nomination
By Maxine Harrison
Anne Hathaway Shared A "Thrilling" 'Princess Diaries 3' Update
By Darshita Goyal
The 'Scream 6' Trailer Shows Off Hayden Panettiere's Return & Ghostface In NYC
By Jack Irvin and Jake Viswanath
Get Even More From Bustle — Sign Up For The Newsletter
From hair trends to relationship advice, our daily newsletter has everything you need to sound like a person who’s on TikTok, even if you aren’t.