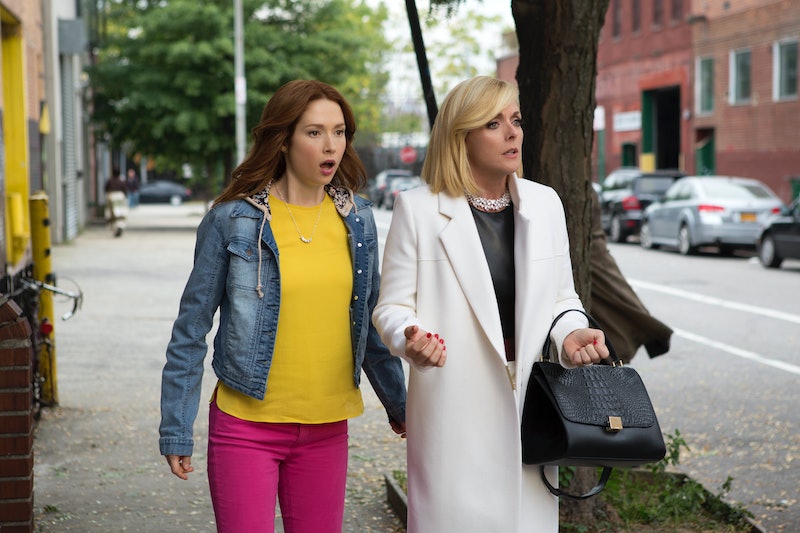 There's just so much to love about the Netflix sitcom Unbreakable Kimmy Schmidt. Ever since it premiered on March 6, viewers immediately fell for the Tina Fey-produced comedy about a young woman (played by Ellie Kemper) who is rescued from a cult and decides to start a new life in the Big Apple. The show's inspiring title character has received much of the praise from audiences and critics alike, but according to a Vox video titled "Unbreakable Kimmy Schmidt's Wonderful World of Color," the hit series should also be recognized for it's highly effective use of costumes and color to develop the character and her new surroundings.

"[Kimmy's] gone from this world of terrible, terrible trauma to a world where everything is bursting with new opportunity," Vox culture editor Todd VanDerWerff says. "The color represents that in many ways." One way that Unbreakable achieves its heightened sense of reality is by putting Kimmy in bright accent colors like yellow and pink. There's also a stark contrast between the neon hues that Kimmy wears in the present day and the drab outfit that she and the other "mole women" wore in the bunker during flashback scenes.

Kimmy's roommate Titus (Tituss Burgess) also gets the same color treatment with bright reds and greens that are color-coordinated with the sets while her rich boss Jacqueline Voorhees (Krakowski) wears neutral tones that match her upper class world.

"We've had some great shows with lots of color in them," VanDerWerff says, citing the Bryan Fuller-created Pushing Daisies and Hannibal as examples of shows — even though they couldn't be more thematically different — that made excellent use of color. This visual trick certainly isn't new to the world of television, but it should also be noted that Unbreakable is the second time that a Netflix show has put a strong emphasis on color to create a specific mood. And the results are simply spectacular.

"I just really want to spend more time in this world because it's so interesting and colorful and unlike anything else on television," VanDerWerff says.

Watch the video discussing Unbreakable Kimmy Schmidt's use of color below: