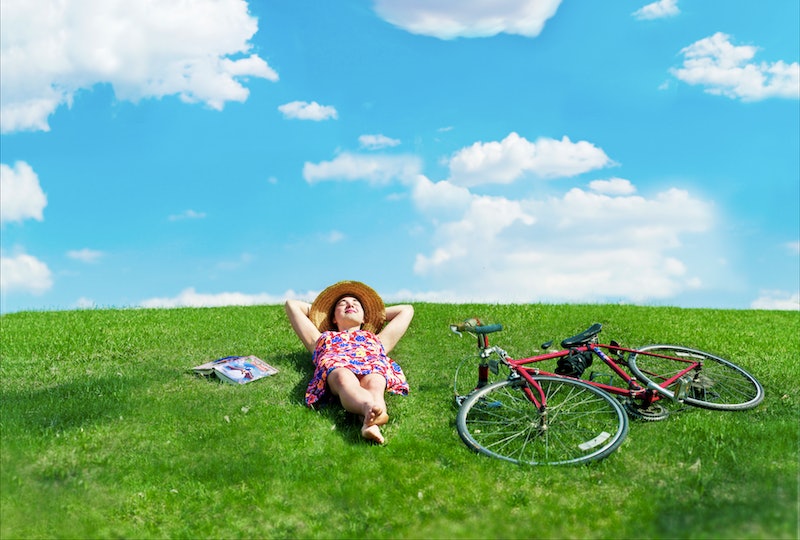 It's getting warmer outside, there's a change in the air, and chances are you're showing at least one of these spring fever symptoms. We swear we've caught it like it's a cold, we joke about it, and we cheers to it when the first outdoor bar opens up since winter's leave. But did you know that there is biological proof that such physical symptoms really do exist?

No, you won't have an actual fever. You won’t be bed-ridden, and the itching you feel is probably just related to your allergies’ negative response to the rise in pollen count. (Or, maybe you rubbed your eye after touching everything in the subway, and now you have conjunctivitis. Gross. You should get that checked out.) But according to some sources (and by some sources I mean WebMD — guys don’t judge), human beings experience a real energy surge in spring due to an increase in sunlight. Apparently the change in daylight triggers a change in the amounts of hormones our brains produce, including an altered amount of melatonin, which is a hormone that influences sleep cycles as well as mood changes.

In other words: there's a scientific reason why you're feeling mega energized right now, so don't let anyone tell you it's all in your head. Got that? Great. Here are the telltale signs you’ve got a bad case of spring fever.

1. The sudden urge to jog creeps up on you

Maybe it's that extra dose of vitamin D from all that springtime sunshine that gives us the energy to run a mile after work. Or, as Michael Smolensky, PhD, professor at the University of Texas-Houston School of Public Health explains to WebMD, maybe it's because body image "springs" to the top of our minds. Whatever the reason, the random urge you're feeling to go for a walk during your lunch break is real.

Craving fresh salads and farmer's market fruit? That's a sure sign of spring fever. We can thank our great great great great (you get the picture) great grandparents for that part of our internal clock, as our ancestors used to experience a period of famine during the winter months. To plan for it, they would eat heavier foods and go into a sort-of hibernation.

It has been found that people typically eat fewer fruits and vegetables in the winter, as fewer are in season than in the spring and summer months. And in the warmer months, we tend to eat lighter foods with more vitamins and proteins.

In spring, you may find it harder to go to sleep at your usual time. This isn't just attributed to daylight saving time. The additional sunlight tells our bodies to produce less melatonin, a main ingredient in putting your brain in sleep mode.

You're happier, and you find yourself smiling, whistling, being nice for no reason, and heck, you're even clicking your heels on the street corner. These are all symptoms of spring fever (depending on your level of quirkiness).

Apparently, this is due to a chemical change, according to a 2008 study which found an increase in serotonin during the transition to spring. Serotonin affects our mood, and as the Huffington Post noted from a piece in LA Times, it is "likely involved in that sudden lust for life we feel in springtime."

5. You can't stop thinking about sex

6. Sweeping and Swiffer-ing have become legitimate hobbies you look forward to

Screw the shopping trip or sunbathing you had planned for Sunday morning, you want to clean all the things. You are not alone in this seemingly uncontrollable urge. Apparently, spring cleaning, though not triggered for biological reasons, is so deeply embedded in our Western culture — cleaning products and services are known to heighten their advertisements in the springtime — that it feels like it's ingrained in our subconscious. Still, this is certainly a symptom of spring fever.