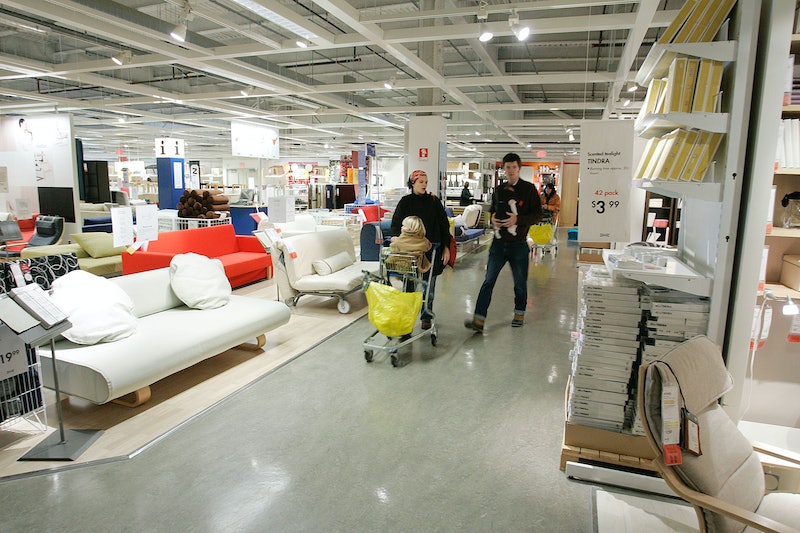 In my lifetime I have, on separate occasions, narrowly avoided getting hit by a school bus, mowed down by a train, and shoved off of I-81 by someone driving an 18-wheeler who didn't check his mirrors. What I mean to say is that I have defied death several times, and lived to tell the tale. But never have I genuinely had my life flash before my eyes quite like it did when I braved the Brooklyn IKEA last weekend. They make jokes about how you'll "never leave," but they're not jokes, guys—I genuinely got so lost that I sat in the middle of the pillow section for a good twenty minutes weighing my options and accepting that I was going to die there, with the steely resolve of the musicians going down with the Titanic.

If you think I am being dramatic then obviously you have never been to IKEA on a Sunday. I saw, heard, and live-tweeted things that I have never witnessed the likes of before. You want to know the true state of the American family? Come to IKEA and watch them argue over an EKTORP. To steal a direct quote from a couple I saw arguing: "People are dying, people are DYING, and you are bullying me to buy this couch?" There is no middle ground in IKEA, you see. There is only black and white; life and death; SVELVIKs and FJELLs.

Don't kid yourself into thinking you can avoid it, because you can't. At some point in your adult life, IKEA will happen to you, and when it does, you need to prepare for all of this to happen:

You think I wasn't warned? You think I haven't watched the episode where an IKEA-bound Liz Lemon nearly rips out James Marsden's throat in 30 Rock? Oh, I knew what was in store for me, but I was determined not to listen. I deserved every bit of what was coming to me and then some.

It takes two subway trains and a shuttle bus to even get inside the Brooklyn IKEA, so by the time I got there, I was feeling pretty smuh-huh-hug, with multiple syllables for emphasis. I had a list of what I wanted, I didn't come with a significant other to squabble with, and I wasn't responsible for another human life like the brave parents armed with strollers and giant sheets of Ritz crackers. This was going to be a breeze.

I'm pretty sure IKEA is so large that each store is basically its own nation-state. Do our government laws even apply when you basically have created your own furniture island? You step into the store and you think you have an idea of how big it is, but you're wrong. And even when you're not wrong, you're still wrong. It just keeps expanding into more things to stare at and buy.

Walking through the showrooms and writing down all the numbers and aisles of things I needed was about the time I started eavesdropping on other families falling apart at the seams (and then live-tweeted it, just in case I hadn't already established that I am a terrible person). Parents were threatening to take away Disney trips from their kids; couples were fighting everywhere; there was one middle-aged man I passed multiple times saying he was "just trying to leave". But of course, I wasn't suffering yet, so this was all very hilarious to me.

The sudden attention span of a 5-year-old

Showrooms are dangerous places for spendthrifts. The only reason I am a good budgeter is because I literally just don't let myself go into stores, because I have less than no self-control once I do. So once I was inside IKEA, I'd already passed the threshold of common sense. I think I sat in approximately seventeen chairs before deciding on one that was fifty dollars more expensive than my original plan (but I am sitting in it right now, and it is so comfy that I will defend this life choice until the end of the universe). I also felt it necessary to turn off and on every light switch to lamps I had no intention of buying, lie down on half the mattresses, and even fake type at a desk to test out the size. Pretty sure I was thirty seconds of air-typing away from getting security called on my ass, TBH.

Disturbance in the time-space continuum

This is the point in the day when you look at your watch ... and realize three hours have passed. Wait, what?

The first few flickers of fear

It only took me like ten minutes to actually find the downstairs part where all the furniture is, and I figured I was golden after that, right?...Right?

Wrong. I was about to unveil another depth to humanity far deeper and darker than anything I'd seen in the showroom. The first people I passed was a mother with her two fully-grown sons, all three of them nearly in tears as the mom said, "I've been following all the exit signs but there IS NO EXIT!"

I picked up a cart and tried my best to un-hear her.

Nothing will beat your self-esteem down faster than trying to navigate the basement of IKEA. In a full "Circle Of Life" moment, I became that crying mom I saw within twenty minutes of circling the place in total confusion. I could not for the life of me find where the giant furniture was. IKEA didn't want me to.

I read a headline the other day saying that IKEA wants its customers to stop playing hide and seek in their stores. IKEA, nobody is playing. I am insulted that they would say this to anyone after trapping us in their matrix. I am not even exaggerating when I say that, in the store I went to, the exit signs led you in a literal spiral around the home decor section. I started passing the same groups of confused people several times over. I started mumbling to myself, even talking out loud, and by then we were all deranged that nobody even spared me a second glance.

Hanger unlike any you've ever known

At this point, I couldn't have found the IKEA food court if I had wanted to. Here I was, an hour spent in their basement, with nothing in my hands or in my stomach. I found half of a Nutri-Grain bar in my purse that I suspect had been in there for months and scarfed it before any of the other customers drop-kicked my human form for it. People have found human remains in IKEA, guys. THE FEAR WAS REAL.

I finally found the furniture aisle, at which point I singlehandedly commandeered two giant flatbed wheelie things (the technical term). I was aware that I looked like a complete moron, but I was living outside of my own body by then. I moved an entire freaking sofa box with my bare hands onto a cart, and I know that sounds unimpressive, but that's because you weren't there. It was HUGE and almost fell on me multiple times. And while it was happening, I spotted a couple heavily making out and petting each other, basically totally willing to let me die five feet away while they did it.

The last gasp of your humanity

You know shit has hit the fan when you are two seconds away from joining another family at IKEA just so someone can be in charge of you again. Like, I really needed someone to be my parent at a certain point. When that became an inviable option, I considered just standing in the aisles whining "I want my moooooooooommmmyyyyyyy" like the fully shattered adult I had become. Somehow I made it with both of my gigantic carts over to the checkout aisle. Don't ask me how. I'm pretty sure I blacked out.

Eating all of your emotions in the food court

I didn't just eat at the food court. I grocery shopped at the food court. I have two IKEA cakes, IKEA juice boxes, and an IKEA crepe mix in my kitchen right now. I don't have the giant chocolate bar anymore, though, because I stress ate the entire thing on the ten-minute shuttle ride back to the subway. Which brings us to our final stage...

I don't think I had a single coherent thought on that train ride home. I only know that the further from IKEA I got, the more human I started to feel again.

But I'll be ready next time, IKEA. And next time, I'm coming with three days worth of snacks, a compass, and several people's parents.

More like this
20 Smart Devices Under $35 That’ll Change The Entire Vibe Of Your Home
By Emma Carey
12 Easy Halloween Costumes You Can Wear With A Denim Jacket
By Kirsten Nunez and Bustle Editors
The 5 Best Sheets For Your Purple Mattress, According To Reviewers & The Brand
By Vanessa Spilios
The 19 Best Tweets & Memes About Bisexual Awareness Week
By Lexi Inks
Get Even More From Bustle — Sign Up For The Newsletter