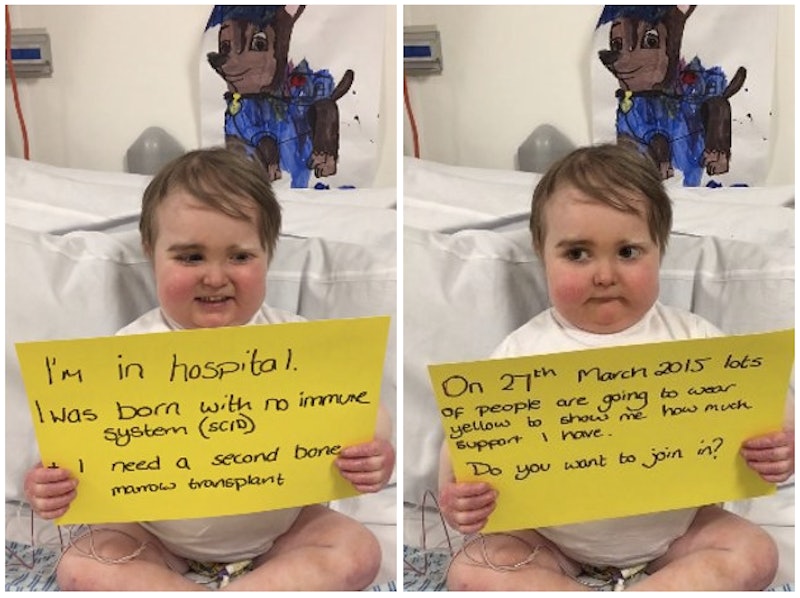 5-year-old Seth Lane tugged at the Internet's heartstrings after his parents posted a video of him asking for people to wear yellow, his favorite color, on March 27. Seth was born with Severe Combined Immune Defiency, commonly known as "Bubble Boy Disease," a rare condition that renders his entire immune system useless. The little boy from Corby, England has spent most of his life in a completely sterile environment, and has not been able to leave his hospital since January, when his first attempt at a bone marrow transplant failed.

As Seth waits for his body to recover so doctors can attempt a second bone marrow transplant, his parents have helped him to film a video featuring him holding up different cards asking for people to wear yellow to support him. Though the video received over 2.5 million views, Seth's parents said they never expected it to go viral: "We never meant to start any sort of campaign, and only expected friends and family to join in," Seth's mother, Leanne, said.

Leanne states on her blog that the purpose of the campaign is "to raise awareness and show Seth he is not alone in this." Seth's parents keep a map in his room so they can pin the countries where people have posted photos. Leanne also wrote on her blog that if anyone would like to enter his room, family members included, they must wears gowns and completely scrub down before entering.

But that doesn't seem to get Seth down. In nearly every picture on their blog, he is smiling and happy.

Leanne also said the campaign "...helps show Seth that people are thinking of him. I told him about the views and he asked, 'Is it more than 20?' I said 'yes it is' and he said 'wowee.'"

"On 27th March 2015 lots of people are going to wear yellow to show how much support I have. Do you want to join in?" the card reads.

"Whenever he is struggling (which is rare, to be fair) we can show him your pictures," his parents said on the blog. Watch the full video below: