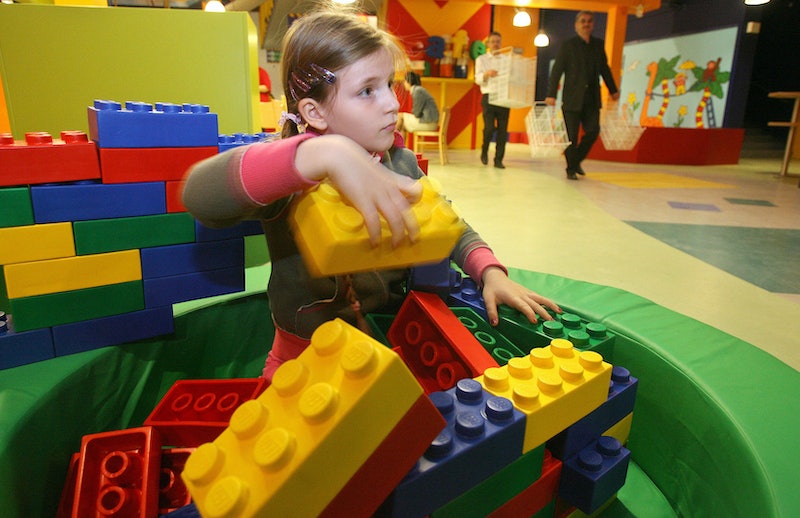 You can learn a lot about a culture's gender norms through children's toys. Pressure to conform to a prescribed set of gender norms starts from the moment we're wrapped in a blanket announcing our gender to the world in the delivery room and just gets worse from there, which is why you probably won't be surprised to hear that Lego is offering beauty tips to 6-year-old girls in the most recent edition of Lego Club magazine. With a few notable exceptions, toys aren't exactly known for their progressive stances on gender equality, but this time, parents have had enough. According to Mashable, "Emma's Beauty Tips" started attracting attention after Sharon Holbrook condemned the spread, which recommends hairstyles for different face shapes, in a blog post.

Unfortunately for Lego, that blog happened to be Motherlode , a parenting blog in the New York Times . The spread is part of the Lego Friends line, which is aimed at "children ages 5-12," and as Holbrook points out, there are no suggestions for how seven-year-old boys can draw attention to their beautiful eyes or distract from their less desirable features. But if your child has a vagina? Lego has plenty to say about her appearance. Does your 6-year-old need to "help [her] face appear slightly shorter?" Long waves are the way to go. What about if she has the dreaded square face? (Poor thing.) Curly bobs will "soften the edges." I believe congratulations are in order if she has the much-vaunted oval face, because those lucky little girls can pull off anything. What could possibly be more important than the ability to wear whatever hairstyle she wants?

<img alt="" src="http://media1.giphy.com/media/CnZnwcWTz0SKQ/giphy.gif" class="article-body-image"/>The Lego Friends line has previously come under fire for its ultra-gendered marketing and emphasis on "female" interests. Products include the "Heartlake Hair Salon," a juice bar, a shopping mall, and a "Sunshine Ranch" full of ponies, because everyone knows girls are only interested in clothes, hair, and farm animals — but only the cute kind. Don't want to mess up our nails!As you can imagine, parents and feminists alike aren't impressed.

In a statement to Mashable, Lego's senior director of brand relations said that the company “sincerely regret[s] any disappointment it may have caused... and have already shared [the concerns] with the LEGO Club team."

It's a perfectly adequate apology. But wouldn't it be nice if toy companies would stop doing things to deserve these apologies in the first place?Image: Giphy

More like this
Women Around The World Are Cutting Their Hair In Solidarity With Mahsa Amini
By Darshita Goyal
Black Women's Equal Pay Day Highlights An Upsetting Problem
By Brandi Neal
Behind The Hilarity Of The "POV: You Walk Into My Room" TikTok Trend
By Lexi Inks
TikTok's Butter Board Might Be The New Cheese Plate
By Emma Carey
Get Even More From Bustle — Sign Up For The Newsletter