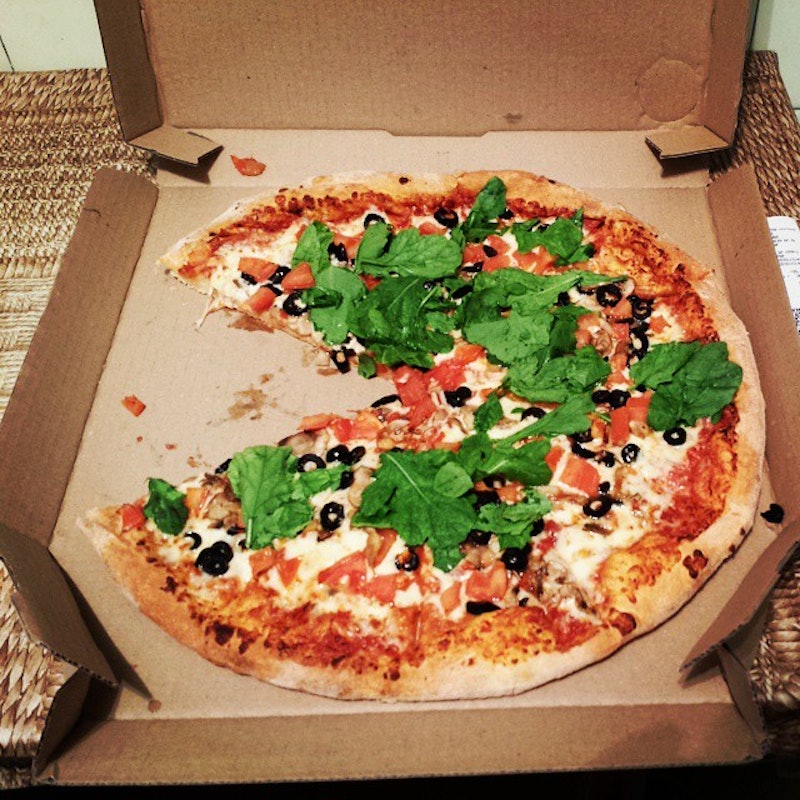 As you may have heard, Domino's pizza is 50 percent off for March Madness this week. Although it's not the hallowed free food offer, half off is still pretty dang good; it means that even the most expensive pizza topping combination you can think of won't cost nearly as much as it normally would. There's nothing quite like the spirit of invention when it comes to pizza, right?

You might remember, however, that there's a catch: The offer is only good for pizzas ordered on the Domino's website and app. I actually think that's an added bonus, though, as it means I do not have to speak to an actual human being when I order my pizza. There's a reason sites like Seamless have done so well, and it's that trying to order takeout on the telephone is one of the worst experiences a person can have. Well, not really — obviously there are a vast number of experiences that are decidedly worse than ordering takeout on the phone — but seriously, you guys. The struggle is real.

In any event, though, this stipulation also affords us one of the great joys of ordering Domino's online: Endless fun courtesy of the build-your-own pizza wizard. So here — in case you're not sure what to order during this wonderful promotion, I came up with a few ideas for you. Most of them are probably not things any sane person would want to eat, but, well… what are 50 percent off deals for but to experience topping combinations you'd never dare to order at full price?

AKA, my version of the hybrid food craze. Admittedly cheddar cheese, ground beef, and jalapenos do not a taco make (or perhaps more accurately, do not a good taco make)… but hey, if you've got some salsa in your fridge, feel free to throw that on top. Then add some Cholula for good measure.

Actually, this one isn't so weird; in fact, it might actually be kind of tasty. It's hard to go wrong with bacon.

3. Nothing But Cheese Pizza

When I say nothing but cheese, I mean nothing but cheese (not counting the crust, of course — all that cheese has to sit on something). Basically, it is a giant, open-faced grilled cheese. It's probably also disgusting, because as awesome as cheese is, not all varieties play well together. But who cares? We're going nuts, right?

Do not eat this one before kissing someone — unless they have a thing for absolutely toxic breath, in which case go right ahead.

The choice of Brooklyn-style crust is deliberate: It's big enough to allow for the folding of your slice while you eat it, thus mimicking the basic shape of a sub. Do not neglect this very important element when building this pie.

If you can throw it on a grill, it's on top of this pizza. The tomato sauce must necessarily be replaced with BBQ sauce, of course.

7. All The Things Pizza

Alas, the All The Things pizza is something you'll have to put together on your own — it turns out there's a limit to how many toppings Domino's will put on any given pie. If you attempt to exceed that limit, you are present with the following message: