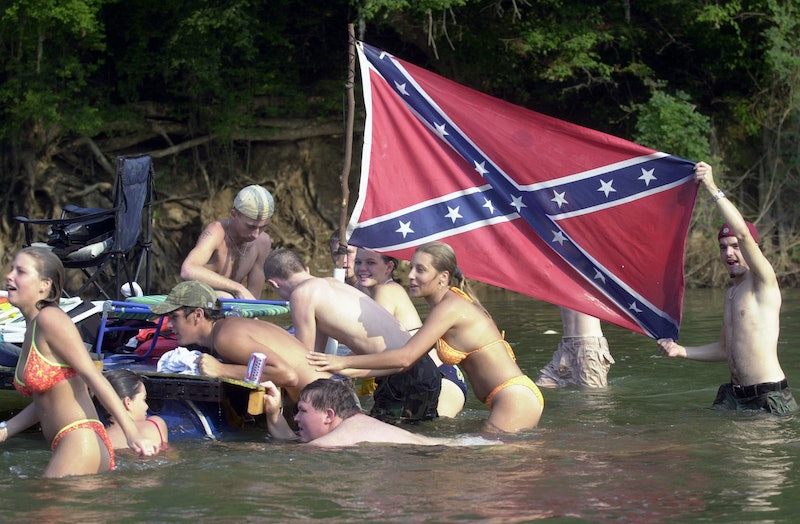 Country singer Jamie Jones’ political anthem, “Pissed Off Rednecks Like Me,” in which he catalogues everything that (he thinks) is wrong with America, has gone viral, logging hundreds of thousands of YouTube hits and selling well on iTunes. The song speaks to conservative paranoia about guns, freedom of religion, immigration, and healthcare, and adds a heavy dose of racism and xenophobia for good measure. Promotional mailings tout the tune as “the most controversial song of the year,” but I don’t think there’s much to debate: The song is a hateful, delusional mess, full stop.

The song’s chorus—“This is coming from real America, son/ And pissed off rednecks like me”—perfectly sums up everything that is wrong with conservative extremists. We hear so much crap about “Real America” from politicians, pundits, and guys like Jones, and what they really mean is “white, Christian, rural conservatives.” The rest of us—liberals, people of color, people who live in cities, immigrants, non-Christians, people who just don’t agree with them—simply don’t count. Well, Mr. Jones, I hate to break it to you, but your idea of the “Real America” doesn’t exist. It has never and will never exist; It is nothing more than a ridiculous fantasy you made up to justify your bigotry, your fear of what is different from you, and your own comforting sense of victimhood. You are a part of “Real America,” but so am I, and so is everyone else who lives here.

To give you a sense of Jones’s point of view, here are just a few of the racist, ignorant gems populating the song’s lyrics:

Dude, NO ONE IS TRYING TO TAKE YOUR GUN. Although the fact that you’re willing to threaten bodily violence to someone who disagrees with you about gun control indicates that you are precisely the kind of person who shouldn’t have one. Just sayin'.

Who exactly is telling your children when and where to pray?? No one. Schools can’t force kids to pray or perform other religious practices. That doesn’t mean your kids can’t pray if they want to.

Hell No, I won't push one for English I just as soon hang up the phone

How does someone else having the option of speaking another language in any way affect or inconvenience you? If you are so outraged by the idea of other people speaking languages other than your own, then maybe you should stop speaking all together. It would be a win-win for everyone: You won’t have to go to the monumental effort of pushing “one” when you make a call, and we won’t have to listen to your xenophobic drivel.

This statement is so out-and-out racist that I think it barely deserves a response, but here goes:

The song goes on to make similarly close-minded, demonstrably false claims about welfare, poor people, and Obamacare, but, frankly, I don’t want to dignify it with anymore of my time. These gifs sum up my general response to this song aptly: