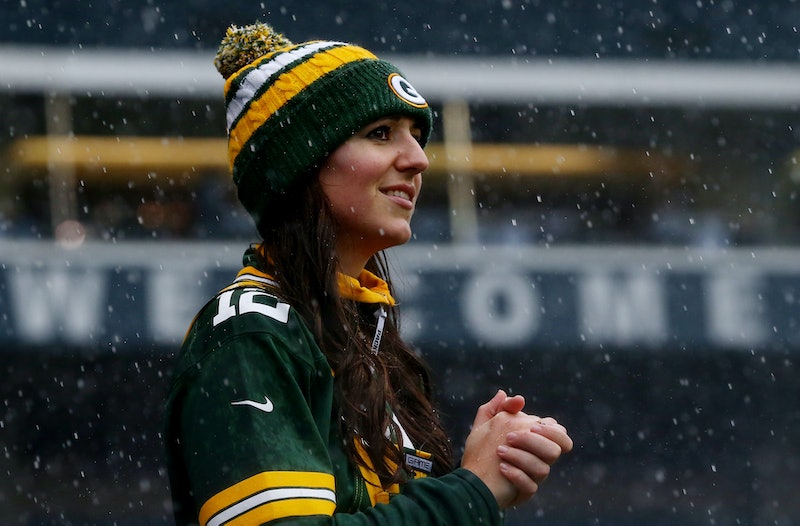 Some girls really, really love sports. Have you fallen over in shock? Can you even believe it? GIRLS. LIKING. SPORTS. What?!?!?! Crazy, right? It can be tough for a woman to do anything not associated with being stereotypically feminine, and liking sports, according to most people, is on the list of those things. It sure is hard to find time to tend to our March Madness bracket when we're so busy juggling all these tampons and IUDs! And as we all know, major league sports belong solely to The Man's World, and being a sports fan falls decidedly into the domain of manhood. Women who are just as passionate about sports as men are often seen as some kind of anomaly, who presumably are either just pretending to be into sports, or is a lesbian. (Can you feel my eyes rolling throughout this paragraph? Just making sure.)

If you're a woman who likes "man stuff"—like sports, or chicken wings, or whatever—you will undoubtedly find yourself subject to a lot of questioning about your intentions, and assumptions about who you are as a person, all based on this one piece of information: You identify as both a woman and sports fan. People are often shocked by you. They don't know what to do or say. It's as though they just ran into a talking kangaroo in a New York bar: They're stunned, probably hoping to get a good video of you being weird they can put online to go viral, with the claim that they spotted a true societal rarity. But women who like sports walk among us. They're everywhere. They're not just at games with their boyfriends—they're there because they WANT to be there. Maybe, in fact, THEY are the ones who dragged THEIR disinterested boyfriends down to the pub to watch the game. YOU DON'T KNOW THEIR LIVES. Here are six things girls who are into sports in their own right are sick of hearing:

Nah, it's really not. We aren't unicorns. There are literally millions of us. What IS weird is meeting someone in 2015 who has such anachronistic ideas about women do and do not like! Can we get past the whole "pink is for girls and blue is for boys" thing, please? And why is no one ever as shocked to meet a dude who doesn't like sports? Why is it the sole domain of women to fit into pre-ordained gender stereotypes? Please explain. Actually, don't. Just stop.

Oh, right, because "liking sports" = "masculine" + "woman" = "butch" = "lady-lover". Man, are you trying to get an Olympic medal in offensive, reductive stereotyping? Because you are KILLING it if that's your goal.

3. "Your boyfriend must think he's hit the jackpot!"

Yes, yes he does, but it's because I'm smart and beautiful and have a wonderful sense of humor and I'm kind and ambitious and loyal and fun to be around. The fact that I am into sports is simply one of a million things that makes up who I am, and unto itself does not make me a more or less awesome girlfriend. My boyfriend, while we're at it, is my boyfriend in part because he's not the kind of person who thinks of sports as an inherently male domain.

4. [Mansplaining something about a game you're already expert on]

Oh, THAT'S what that line on the field means! Are you for real? When a girl loves a game and knows the rules and the players inside out, it's insulting to have a man condescend to explain things about it to her. Yes, women are as capable of having a grasp on and knowledge of sports games as much as men.

5. "Who do you think is the hottest player?"

Just because someone is a girl who likes sports, it doesn't mean that she's in it just for the cute guys in tight pants aspect. There's a chance that she's, you know, actually interested in the game they're playing. (But obviously Tom Brady, duh. Don't act like you didn't already know that.) And also, if we DO comment on the crush-worthiness of a player, don't let that invalidate our genuine interest in the game itself. Multitasking: We know how to do it. We might be hardcore about our fandom, but this is a sporting event, not brain surgery; It's okay to have fun about it.

6. "You know, the woman's league is actually not that bad."

Hey, thanks for that little consolation! The thing is, just because someone's a woman, it doesn't mean she follows the woman's league! While women's sports are JUST as good and JUST as important as men's sports, the unfortunate fact is the major leagues are all male teams, and women are allowed to be wild about them without the addendum that they're also big on women's sports.

7. "But do you REALLY like sports, or are you just trying to look cool?"

Yes, I'm completely faking a super-involved, all-consuming love for something that I don't actually care about at all, just for the sake of trying to fit in with people like you. Also, this isn't my real face. *Removes human face mask*

DON'T BRO ME IF YOU DON'T KNOW ME. You don't know how much "like other girls" I actually am. If you insist on upholding the stereotype of "normal girls" as being catty, makeup-obsessed, bitchy, superficial, annoying people, at least don't assume that me liking sports means that I'm not also those things. I might be! When you say this, you're A) assuming that you know everything about me based on one piece of information, and B) letting me know the kind of unfair clichés about women you uphold. Not really here for any of that.

Why? Is this female sports fan also solving world hunger? Finding a cure for cancer? Creating peace in the Middle East? Doing volunteer work in her community? An excellent singer? A great sports-player in her own right? Is she doing anything extraordinary at all? Because news flash: Sitting on the couch with your pants off, eating wings and screaming at a game on the TV is not a feat that takes all that much skill. Liking sports is no more impressive than liking celebrity news or getting your nails did. It's like enjoying reading or yoga or drawing or any other kind of leisure activity. It's just another thing a woman enjoys, and there's no need to act like it's the bravest, most unbelievable thing she's ever achieved, ESPECIALLY when you don't treat any of her other personal pleasures that way.

More like this
Isa Guha Is Taking The Lead
By Charlie Mock
Women Around The World Are Cutting Their Hair In Solidarity With Mahsa Amini
By Darshita Goyal
The Spiritual Meaning Of Angel Number 000, Explained
By Kristine Fellizar
Black Women's Equal Pay Day Highlights An Upsetting Problem
By Brandi Neal
Get Even More From Bustle — Sign Up For The Newsletter