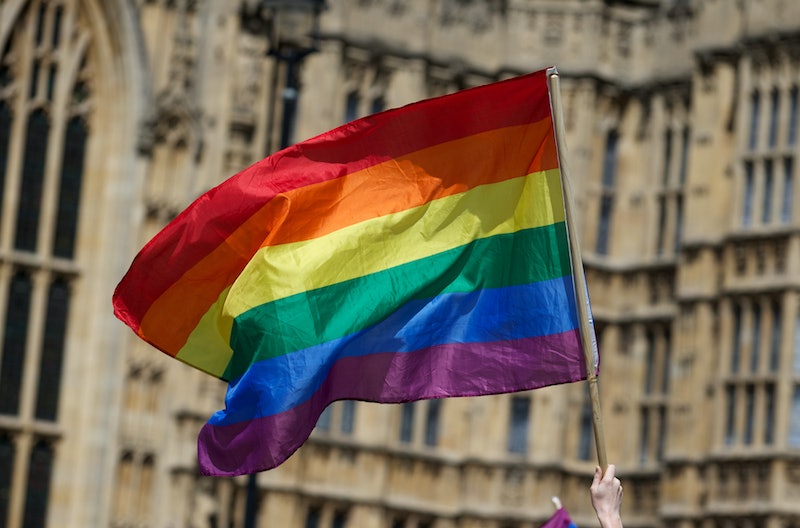 Break out the champaign and the rainbow flags! The Presbyterian Church has officially voted to change their official definition of marriage to include same sex unions, making them the largest Protestant denomination in the United States to do so. Amen to all of that!

The new definition, which defines marriages as being between "two people" rather than between "a man and a woman," was first proposed last year, when the church also gave pastors living in states where marriage equality is legal permission to perform same-sex ceremonies. But before the new definition could be finalized, it had to be approved by a majority of the regional church bodies — a victory that finally happened today, marking a huge victory for marriage equality.

It's not a total victory, of course. The church has stated that pastors who don't feel comfortable performing same-sex ceremonies don't have to, which could put couples in a tight spot if all the pastors in their area feel that way. But this still gives Presbyterian LGBT people the right to a Presbyterian wedding ceremony, and to be officially married in the eyes of their church, which is awesome. So, for that matter, is the fact the more churches embracing marriage equality makes it a lot harder for homophobic arguments against it to claim that the issue is really about protecting "religious freedom."

The Presbyterian Church has 1.8 million members, making it the largest denomination in the country to formally recognize same-sex marriage on this scale. However, it isn't the only one. Here's a look at which Christian denominations stand on marriage equality.

Unitarian Universalists have long been supportive of LGBT people, and in fact first established an Office of Bisexual, Gay, Lesbian, and Transgender Concerns back in 1973. Today they not only endorse same-sex unions, but also advocate for marriage equality for everyone.

Towards the opposite end of the spectrum, the Catholic Church is firmly opposed to gay marriage, a position which is not likely to shift any time soon. However, there are certain signs that such a change could be theoretically possible, such as the Vatican giving an LGBT Catholic group the VIP treatment during a recent visit. But true acceptance of marriage equality is a long, long way off.

Though Methodists officially endorse equal rights for all people, regardless of sexual orientation, they still believe that marriage is only meant to be between a man and a woman.

The Church of Jesus Christ of Latter Day Saints is still stuck in the "it's not wrong to experience same-sex attraction; it's just wrong to act on it" model of understanding LGBT issues. However, the church has recently made a few more progressive move, including backing anti-discrimination protections for LGBT people and allowing LDS members to support gay marriage on social media. Is a more inclusive approach coming soon?

You might associate Quakers with being old-time-y, but actually when it comes to LGBT acceptance, the church has been way ahead of its time: The Society of Friends first affirmed LGBT rights in 1963, more than 50 years ago. Although the denomination is decentralized (meaning different congregations still have very different opinions on the issue), many congregations have believed in marriage equality for decades.

So there you have it. Of course, now that acceptance of LGBT people is at an all-time high and continuing to increase — and now that marriage equality is sweeping the nation — it will be interesting to see how long it takes for some of these denominations to change as well.

More like this
The 19 Best Tweets & Memes About Bisexual Awareness Week
By Lexi Inks
An Honest Review of MeUndies Boxers, According To A Non-Binary Person
By Megan Lasher
Pro Footballer Zander Murray Is "Blown Away" By Support After Coming Out
By Sam Ramsden
It's A Pleasure #53: Help! My Boyfriend Won't Tell Me Why He Stopped Going Down On Me
By Sophia Benoit
Get Even More From Bustle — Sign Up For The Newsletter