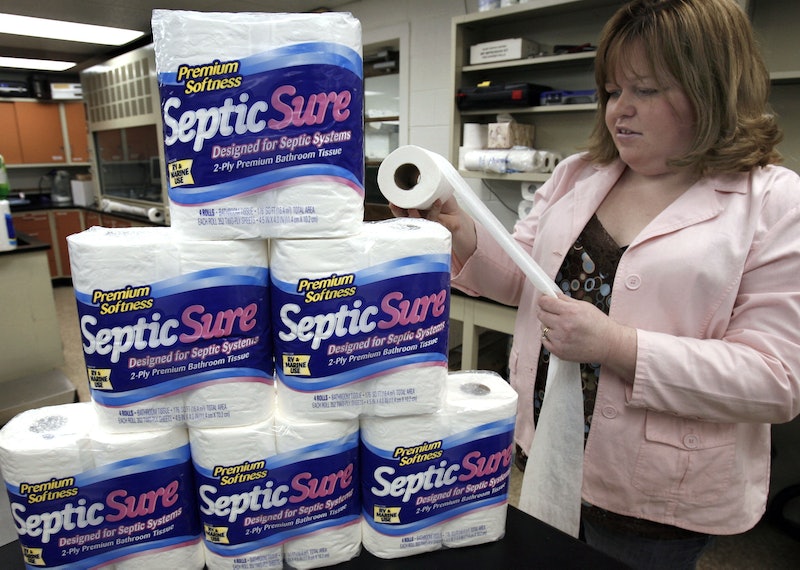 For generations, we have pondered the most pressing of questions, the question upon which the answers to all other questions depend (well, not really — but sometimes it certainly feels that way): Should toilet paper hang over or under the roll? It's a topic so hotly debated that it even has its own Wikipedia page… but cease your search. Wonder no more, for the answer has finally been determined once and for all. According to the patent for perforated toilet paper, it is…

OVER. The free edge of any roll of toilet paper should hang over the roll, not under it. You know what this means, right? You've got it: Anyone who has stood strong with me on the side of the “over” folks now has the full right to say, “I TOLD YOU SO!” to all the “under” people. Do it nicely and respectfully, of course… but do feel free to do it, because it turns out we were right all along.

To be fair, the patent has been available to view for free on the Internet for quite some time; Google actually has a searchable database of millions of patents, with the documents originating from the United States Patent and Trademark Office, the European Patent Office, and the World Intellectual Property Organization. Tech writer Owen Williams of The Next Web, however, is responsible for pointing us all in the direction of the one that concerns us right now: Seth Wheeler's patent for perforated toilet paper, which dates back to 1891. “My invention consists of a roll of connected sheets of paper for toilet use,” reads the patent, “said roll having incisions at intervals extending from the side of the web toward the center, but not meeting, and terminating in an angular out, whereby the slight connection left may be separated without injury to the connected sheets.” More importantly, though, it also includes a number of pictures… including this one:

BAM. The patent describes Figure 1 as “a view of my roll of paper having arched and serrated incisions with a sheet hanging therefrom” and Figure 2 as a representation of “a detached sheet of paper”… but let's face it: The only thing we care about right now is the fact that the paper in Figure 1 is hanging over, not under. Mystery solved!

While we're on the subject, though, there are an awful lot of other burning questions to which I'd love to get some answers. Here are a few of them, including whether or not anyone has actually figured them out yet.

1. Why do hammerhead sharks have hammer-shaped heads?

We only recently finally figured out why hammerhead sharks look the way they do; it may have something to do with what's called binocular vision. A 2009 study determined that hammerheads can actually see 360 degrees, thanks to their unusual head shape — all the better to hunt you with, my dear.

2. Do colors look the same to everyone?

We know a lot about what goes on while we're dreaming — but we still haven't figured out exactly why we dream in the first place. A study published in 2011 suggested that it's sort of a defense mechanism or healing thing for our brains; dreams may ease painful memories. That's just one part of the bigger picture, though, and we don't know what the whole thing looks like yet.

OK, so yes, my love of sci fi may be getting the better of me here (see also: Is time travel really possible?) — but the whole “can robots think and feel” thing is actually connected to questions of free will. And also whether or not Skynet will actually happen.

5. Which came first, the chicken or the egg?

According to science, two birds, neither of which are chickens as we currently know them, came together once upon a time and created an egg. From that egg hatched a chicken. Whether you look at this answer as the chicken and the egg developing simultaneously or whether you see it as proof that the egg came first is totally up to you. While you're at it, though, here's a brief history of the domesticated chicken. It's an epic 10,000 years in the making, so I suggest you read it.

More like this
How To Turn Off Night Mode On Your iPhone Camera
By Emma Carey
Behind The Hilarity Of The "POV: You Walk Into My Room" TikTok Trend
By Lexi Inks
Why TikTok Is Flooded With Controversial Videos About "Pick Me Girls"
By Courtney Young
Here's How To Get Your iPhone To Update Automatically Forever
By Emma Carey
Get Even More From Bustle — Sign Up For The Newsletter