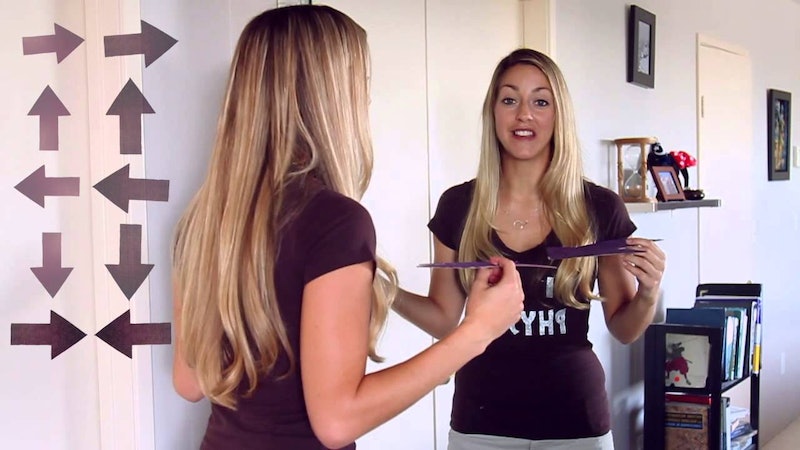 It’s a well-known fact that women are drastically underrepresented in the STEM fields. There have been many attempts to encourage more women to enter into and stay in the sciences, from proposals that more women should present at academic conferences to make-up companies sponsoring female scientists, but such initiatives don’t get at the deeper problem: the broad cultural forces that tell women and girls that STEM is not for them. It’s all well and good to get more lady scientists to present at conferences, for instance, but this only helps women who have already reached an advanced stage of scholarship and does little to combat the fact that too many girls opt out of the sciences from a young age due to a lack of prominent science-y female role models and pervasive stereotypes that girls are bad at math. Dianna Cowern, outreach coordinator at UC San Diego’s Center for Astrophysics and Space Sciences, is trying to change all that with her “Physics Girl” YouTube channel. Her videos, exploring topics ranging from how rainbows form to the nature of solar and lunar eclipses, are smart, quirky, and fun for viewers of all ages.

In 2014, Cowern won the “Flame Challenge,” a national competition started by actor Alan Alda that challenges contestants to make scientific concepts enjoyable and accessible to children. In her latest video, Cowern shows us how to calculate pi (π) with darts. “How is such a thing possible?!”, you ask. Watch the video and find out:

Cowern isn’t the only awesome lady promoting science online. Be sure to check out these five scientists and science communicators:

Emily Graslie is an American science communicator and star of the YouTube series “The Brain Scoop.” Graslie, who is the Chief Curiosity Correspondent of The Field Museum of Natural History in Chicago, takes viewers on adventures in natural history, exploring such subjects as mummy brains (above) and the bat caves of Kenya. Follow her on Twitter here.

Julia Wilde is a science blogger and vlogger, with an awesome YouTube series exploring essential topics like the science of beer and coffee. In the video above, find out why she loves slime mold. Find her on her blog and on Twitter.

Joanne Manaster is a biology lecturer, STEM advocate, and former model who seeks to promote scientific awareness through the power of social media. With her Twitter account, Manaster keeps her more than 50 thousand followers well versed in what’s happening in science news and pop culture.

Elise Andrew is a British blogger, science communicator, and founder of the popular Facebook page, “I F*cking Love Science.” IFLS, which now also has a web series, offers readers the latest in science news, memes, and popular culture. You can also catch Andrew on Twitter.

Danielle Lee is a self described “Biologist & Hip-Hop Maven,” who studies mammalogy, ecology, and animal behavior. She blogs for Scientific American as “The Urban Scientist,” working to share urban ecology and evolutionary biology with general audiences and promote diversity in the sciences. Check her out on Twitter.