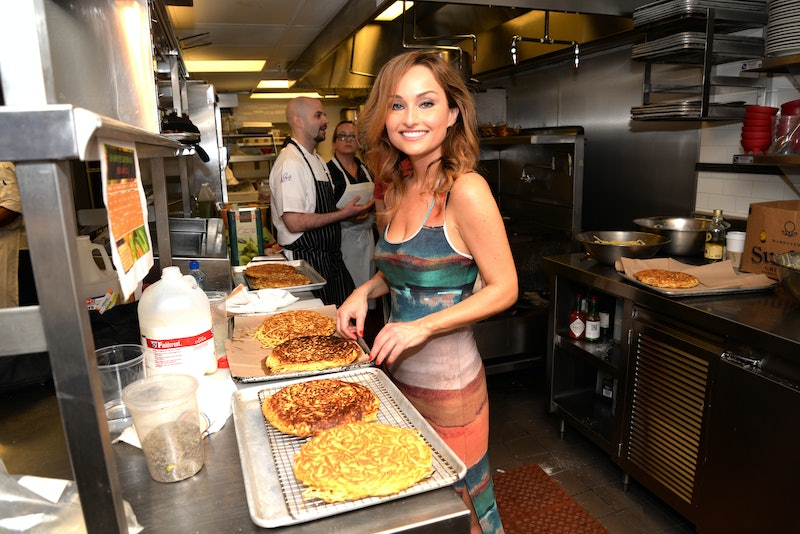 If you like to unwind after a long day by letting Ina Garten's soothing voice carry you off to a world where kitchens are softly lit and chicken magically cooks over the course of a commercial break, followed by rather less-soothing failed attempts to make her dishes, it might be time to find a new hobby. According to a recent study, recreating the food on cooking shows could make you gain weight, which... honestly isn't that surprising if you think about it. Paula Deen isn't the only one whose recipes feature more butter than is probably healthy (although most other Food Network stars' meals come without a side of bigotry at least). As delicious as Giada de Laurentiis' ultra-popular fried ravioli may sound, any food that involves cheese-wrapped noodles dipped in buttermilk and fried probably isn't the best idea if you're trying to stay healthy.The study, which was conducted at Cornell, compared 500 female participants' cooking habits with their BMIs, NPR reports. Women who watched cooking shows and frequently cooked at home, known as "doers" in the study, weighed an average of 11 pounds more than those who just watched the shows, a.k.a. the "viewers." That's not to say that skinnier equals better and weighing more equals being unhealthier, but there is a correlation between extra pounds and more health problems.

So if you just like watching Alton Brown putter around a perfectly-staged kitchen, you don't have anything to worry about. It's when you start trying to make the food at home that you run into problems of the possibly-need-new-jeans variety.

<img alt="" src="http://s3-ec.buzzfed.com/static/2014-06/6/17/enhanced/webdr04/anigif_enhanced-20930-1402089254-7.gif" class="article-body-image" title="Image: http://s3-ec.buzzfed.com/static/2014-06/6/17/enhanced/webdr04/anigif_enhanced-20930-1402089254-7.gif"/>Although it might seem counterintuitive, especially in light of the recent focus on cooking at home rather than eating out, NPR points out that this isn't the first study to show that what you're eating is just as important as who's making it. While cooking from scratch allows you more control over ingredients and the possibility to make healthier preparation choices, a study in Preventative Medicine last year found that the more middle-aged women cooked, the more likely they were to have higher BMIs. "Butter in your kitchen is still butter," study author and nutritionist Lizzy Pope told NPR. "It has the same calories."This doesn't mean you can live off of McDonald's and Chipotle like you've always wanted, unfortunately; there's still substantial evidence that making most of your meals at home is an important part of a healthy lifestyle. Just maybe think twice before you go making a full batch of those salted caramel brownies that looked so good on Barefoot Contessa, no matter how much you may want to devour the pan in one sitting.