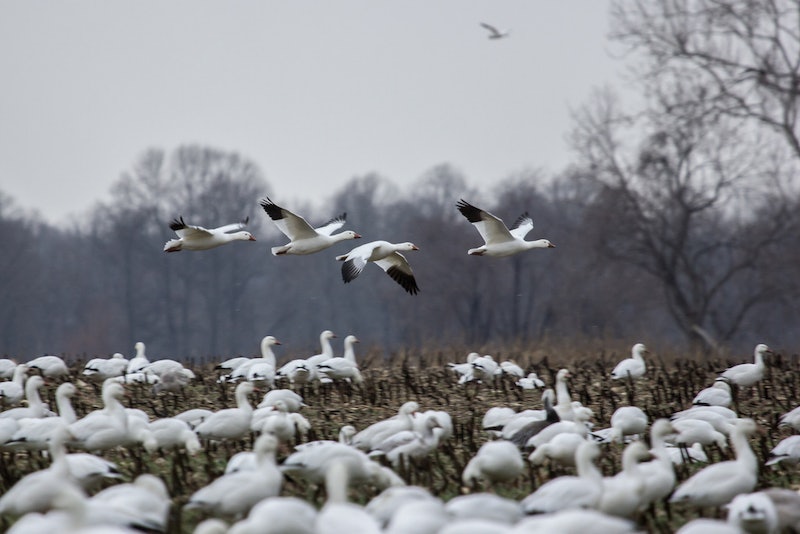 Soooooo here's a really weird news story to leave you scratching your head today: Thousands of geese literally fell out of the sky in Idaho this week. I'm not kidding. One minute they were flying… and the next minute they were dead and plummeting out of the sky at a fantastic rate. Not going to lie: I'm kind of concerned this strange and unusual event heralds the beginning of the apocalypse. I mean, it probably doesn't… but anything is possible, right?

The Idaho Department of Fish and Game announced on Monday that staff and volunteers spent the weekend collecting the carcasses of roughly 2,000 migrating snow geese from around the Mud Lake and Market Lake Wildlife Management Areas. The good news — insofar as the mass death of migratory birds can have any good news attached to it — is that we're pretty sure why it happened: The geese likely had avian cholera, so they didn't just drop dead for no reason. The IDFG Wildlife Laboratory is still running tests to confirm that the cause of death was indeed avian cholera; however, the symptoms displayed indicate that the disease is probably to blame. The carcasses were incinerated so as to prevent other scavengers and predatory birds from contracting the illness; furthermore, humans aren't at a high risk of infection from it, so the geese will likely constitute the only casualties.

Still though — it's effing weird. According to the Washington Post, avian cholera can kill in just six hours after it's been contracted; as IDFG spokesman Gregg Losinski told Reuters, “Basically, they just fell out of the sky.” Can you imagine what that must look like? Thousands and thousands of birds, coasting merrily along… only to stop suddenly and begin their nightmarish descent at the hands of gravity. It's the kind of thing you think only happens in movies — except clearly that's not the case. Those poor birds.

But hey, I suppose at least it's not the first time something like this happened. I mean, I don't want to imply that the large-scale death of any creature — bird, beast, or human — isn't always a tragedy (because it most certainly is); at the same time, though, we can probably assume that this instance is NOT, in fact, a sign that the end is nigh. Remember these other, similarly eerie events?

Upwards of 30 crows in downtown Portland, Oregon died mysteriously in November of 2014. It was eventually determined that the crows had been intentionally poisoned, because people are the worst.

Just a few weeks ago, huge numbers of sea life — fish, squid, seahorses, and more — turned up dead off the coast of Singapore. Environmental authorities pegged the deaths to “plankton bloom,” in which a species of plankton suddenly multiplies so rapidly it damages the gills of fish.

As the calendar ticked over from 2010 to 2011, thousands of blackbirds fell from the sky over Beebee, Arkansas… and then it happened again on New Year's Eve the following year. Scientists discovered that the birds had all suffered massive bodily trauma, rather than illness; we don't, however, know what caused that trauma. Weird, isn't it?

Thousands of turtledoves, many with mysterious blue stains on their beaks, fell dead from the sky over the town of Faenza at the beginning of 2011. What caused it? Possibly the birds overeating and suffering from indigestion. Hypoxia might explain the blue stain, but it's still really disturbing.

This one? Oh man. This one. In 2005, 1,000 toads in Germany literally exploded without warning. According to LiveScience, an autopsy performed on a few of them revealed that they had been attacked by birds, who had also eaten their livers. The toads puffed up, thanks to their natural body defenses—but without their livers, that same defense also made them explode. Ooof.

2011 became the third year running for the seaside town of Kent to see thousands of devil crabs washing up on its shores. And by “thousands,” I don't just mean one or two — I mean 40,000. It was probably due to cold weather conditions, but still. 40,000 dead crabs, you guys.

One Sunday night in 2009, dozens of pilot whales and a handful of dolphins got stranded on King Island, located in the Bass Strait between mainland Australia and Tasmania. In the months leading up to the incident, some 400 whales had died around Tasmania; however scientists still don't know why it happened.