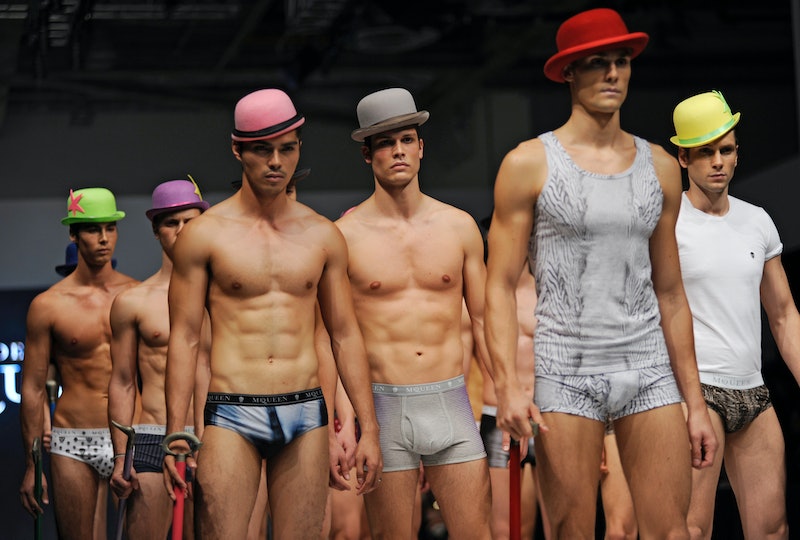 As much as advertisers love to plaster mostly-naked women all over whatever they're selling, shrieking "sex sells!!" at anyone who dares to question their tactics (American Apparel, anyone?), the results of a recent study from the University of Technology, Sydney, beg to differ, proving that straight men find other (shirtless) men attractive enough to influence their purchasing behavior. According to the study, half-naked men in advertisements make heterosexual men take more financial risks, especially when the men feel less attractive than the models. In fact, the more suggestive the pose, the more money they spend. Does anyone else find this as hilarious as I do?The study, which is published in Evolution and Human Behavior , divided 180 heterosexual men and women into groups, each of which viewed a fashion advertisement matching their gender (women saw female models, men saw male), the Daily Mail reports. The models fell into two categories other than gender: either average, meaning neither fit nor overweight, or attractive and in a suggestive pose. In order to determine the effect the ads had on risky behaviors, participants were also asked to pick between theoretical lottery choices. They were equivalent mathematically, but some gambles were riskier than others. Viewing Victoria's Secret ads had no effect on female participants' risky behavior, although the study did note that women were more inclined than men to take risks overall. Men, however, were easily swayed by viewing shirtless male models.

<img alt="" src="https://31.media.tumblr.com/tumblr_li1w3wg94C1qbpu5t.gif" class="article-body-image" title="Image: https://31.media.tumblr.com/tumblr_li1w3wg94C1qbpu5t.gif"/>On average, men took more financial risks when they viewed the attractive models. More specifically, those who rated themselves as less attractive than the Abercrombie & Fitch models were significantly more likely to accept risky gambles, and the men who found themselves more attractive than the A&F hunks were less likely. Things got a little hairy when researcher Eugene Chan was asked to explain the findings. He told the Daily Mail that the results are proof that men are still "in the cave," a.k.a. slaves to their inner cavemen. This kind of evolutionary psychology, however, is still controversial in the field thanks to its assumption that desire for heterosexual sex underlies everything, among other concerns. It's also unfalsifiable and imposes current cultural values and gender roles on scientific findings, so let's take Dr. Chan's claim that less attractive men take financial risks to increase their value as a potential mate, because everyone knows all women look for is money and a hot bod, with a grain of salt. Lots of grains of salt, actually.As for why women weren't affected by viewing the Victoria's Secret ads, maybe it has a little something to do with how women are bombarded with half-to-mostly-naked women in suggestive poses pretty much everywhere they look. You just get used to it after a while. But hey! Does this mean that marketing people will start using more shirtless men in their advertisements? I have no idea. To celebrate the possibility, though, let's rewatch David Beckham's glorious H&M underwear commercial.

Guy Ritchie has my eternal gratitude for making that ad possible.

More like this
The 19 Best Tweets & Memes About Bisexual Awareness Week
By Lexi Inks
Black Women's Equal Pay Day Highlights An Upsetting Problem
By Brandi Neal
Are Quality Time & Gift-Receiving Love Languages Compatible?
By Lexi Inks
The Differences Between Polyamory & Open Relationships
By Lexi Inks
Get Even More From Bustle — Sign Up For The Newsletter