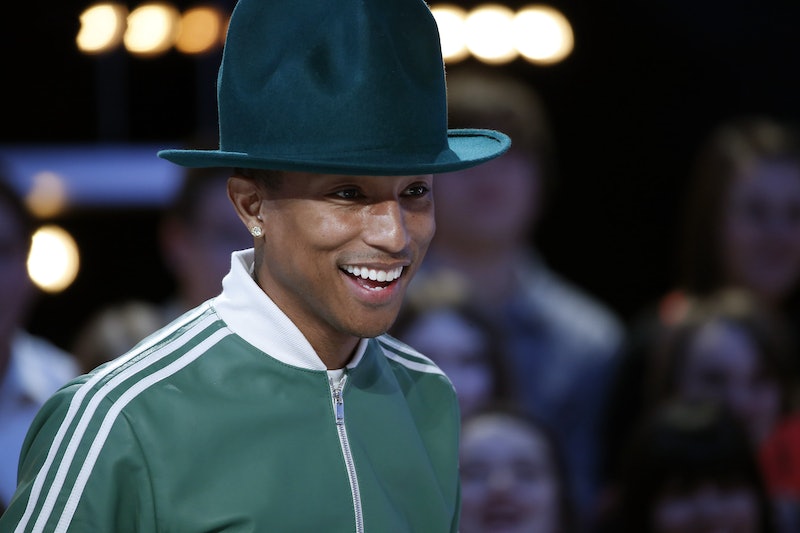 Today the Council of Fashion Designers of America, or CFDA, announced that Pharrell is receiving the 2015 Fashion Icon Award during the awards at the Lincoln Center on June 1. The Fashion Icon Award is "given to an individual whose style has made a significant impact on popular culture on an international stage," according to the CFDA's website. From Pharrell's "Happy" video that inspired people around the world to the infamous Grammys hat that has its own Twitter account, there's no doubt that Pharrell, a singer, songwriter, rapper, record producer, and fashion designer (wow, how does he do it all?) is more than deserving of the award.

The CFDA has awarded the top fashion designers and icons since 1981, yet Johnny Depp is the only other male to have received the Fashion Icon Award (he got it in 2012). President of the CFDA, Diana von Furstenberg, summed up Pharrell's style and personality herself: “If cool was a person, it would be Pharrell, not just for his looks and sense of style but for his kindness and openness."

The CFDA Fashion Awards collaborate with Swarovski, and last year's Fashion Icon Award winner, Rihanna, stunned us with her Swarovski crystal gown. Here's to hoping that we'll see Pharrell decked out in a Swarovski-studded hat.

Even though the awards aren't until June, here's some of our favorite moments of Pharrell's fashionable looks and reasons why he definitely deserves the award:

1. In This Chanel Short Film

Karl Lagerfeld chose quite the good-looking and fashionable couple for this Chanel short when he casted Pharrell and Cara Delevigne. Pharrell as a bellhop boy who turns into European royalty? We'll take that look any day.

2. In This Jacket Embroidered With Roses

Pharrell's style has always been about risk-taking. Here's a close-up of a rose-embroidered jacket that Pharrell wasn't afraid to rock while accepting his place on the Hollywood Walk Of Fame:

Black and white has never looked so good on Pharrell. It also helps that he's casually playing the keyboard while wearing an Adidas track suit, NBD.

Pharrell was bound to end up being a GQ cover boy. Leather jackets do a man good — especially Pharrell.

5. On The Happy Album Cover

OK, it's not his GIRL album cover where we see him wearing a robe, but we're still loving this semi-casual jean short and button-up combo. I'm thinking Pharrell has a designated bow tie for all of his outfits.

6. While Accepting Another Grammy

I think it's safe to say Pharrell has reinvented the men's suit with his suit shorts. And there's another bow tie!

7. During This Variety Event

Some people thought Pharrell was channelling too much of The Grand Budapest Hotel for this look, but somehow he pulls it off.

There's the hat that made waves! What will be your next viral trend, Pharrell?