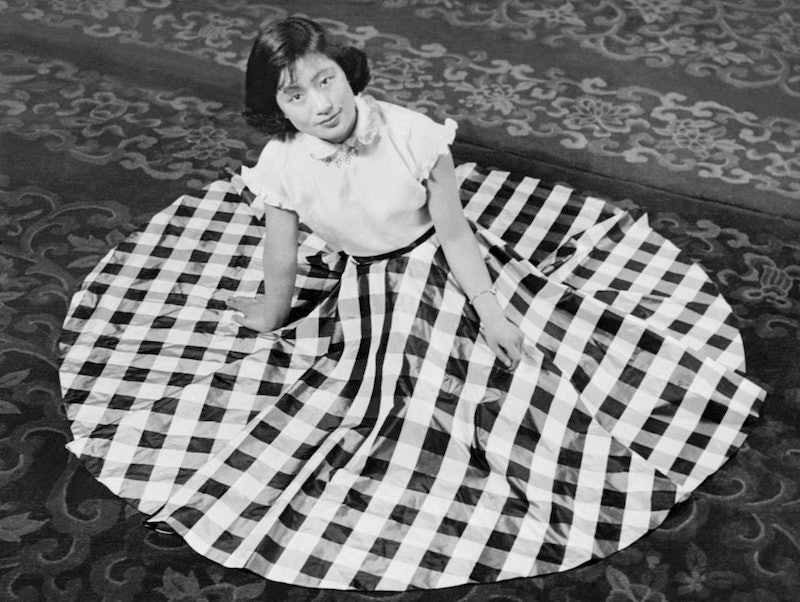 As we were sitting in front of the TV one evening, my friend showed me a picture of a gorgeous 1950s-style dress on her smartphone and sighed, “Ohh, the '50s were great...” I mention how beautiful the dress is and refrain from commenting on her statement. Were the '50s great? I start to mull it over. Sure, the dresses were great, but there must be a whole lot more to the decade than that.

Whilst I appreciate the waist-flattering fit and full-skirted sway of a 50s-style frock, I’m not sure I share this rose-tinted view of a decade I’m much too young to understand. I am a 24-year-old woman, unmarried with a degree and no children. I sometimes go out in jeans and t-shirts. Considering my age, all of these statements would have been highly unusual — if at all possible — for a woman in the '50s. Should we really be swooning over a bygone era when, by most accounts, the options for women were extremely limited?

In the 1950s, the American economy experienced a boom. The days of World War II rationing were finally ending, TVs and washing machines were becoming increasingly commonplace and the invention of plastic marked "the beginning of the consumer age" — the foundation for our contemporary culture of disposability. Although the Cold War was ongoing, this still must have been an exciting time for many people in the Western World — a time of economic growth and hope for the future, in stark contrast to the bleak World War II years. It was this decade that witnessed the first organ transplant, the discovery of DNA and the first successful Everest expedition. The USA gained Hawaii and Alaska, Queen Elizabeth II was crowned in England, and that ubiquitous blonde, plastic queen of fashion dolls — Barbie — was created.

I imagine that in many ways, it felt like things were really picking up. An era of change had begun — and not just in technological or economic advancements. Inequality was widespread and the Civil Rights Movement had begun to challenge white supremacy. In 1954, Rev Brown won the right to send his child to a white school and in 1955 Rosa Parks famously refused to give up her seat on a bus to a white person, inspiring the Montgomery Bus Boycott. In 1957, nine black students attended a white school in Arkansas — but with military protection.

The work of the Civil Rights Movement was the beginning of the ongoing fight for equality. Whilst there is still work to be done today, extreme forms of discrimination were the norm back then. The idea of equality being an uncommon aim is completely alien to me and I am grateful to have been raised in an era where I have been taught that it is right to treat all human beings equally and not to discriminate against others.

This 1950s "educational" film also gives us an idea of attitudes towards sexuality at the time. In this video, youngsters were warned about homosexuality — something described in the clip as “a sickness of the mind.” As well as suggesting that homosexuals are to be feared, this video also sickeningly implies that all homosexuals were adult men looking to abuse boys.

llinois was the first U.S, state to remove consensual "sodomy" from its criminal code in 1962 and the U.S. Supreme Court didn’t invalidate all "sodomy laws" across the USA until 2003. Homosexuality remained on the American Psychiatric Association’s list of mental illnesses until 1973. At least in my lifetime — ever since I was old enough to be aware of sexuality — I have known that being gay and bisexual are real orientations. And thankfully, nobody I have ever met has openly tried to invalidate non-heteronormative sexualities by calling them a "mental illness" in my presence.

The archetype of a typical ‘50s housewife is also a familiar idea for most of us and it seems the role of women at the time was pretty much as you’d expect. Feminism was still in its infancy — with Simone De Beauvoir’s The Second Sex being written in 1949 and published in English for the first time in 1953. During the war, many women had been given work, to fill the roles of men who were away fighting. Come the end of WWII in 1945, more women were in the workforce than previously, but they were encouraged to revert to filling the role of wife and mother instead.

In 1950, Patricia Stanley gave up her job for the National Coal Board (in England) for this reason. “It wasn’t easy,” she says, “I was a wife and full-time mother to three boys under four. I wanted to be at work.” Most women were married by 21 and mothers at 22, which left little or no time for working. Contraception was limited and, “men took care of that side of things,” as Stanley frankly explains. “That’s why I got pregnant so often.”

Sex education was also poor, as Bustle's own Emma Cueto illustrates. The reason the contraceptive pill, created in the 1960s, is widely regarded to have played such a huge part in feminism, is that its eventual widespread availability enabled women to finally "take care of that side of things" — to be responsible for their own birth control and to understand it better. The later availability of the pill meant that women were no longer simply popping out kids through lack of choice. But in the 1950s, this was still a distant dream.

So women didn't have much choice in birth control, but did they have much choice in fashion? One of the key looks for women in the 1950s was the classic hourglass and there was an expected "conformity in the way people should look." A small waist was desired and emphasized or created through the use of structured clothing, which would ideally contrast with larger hips and an ample bosom — created, if necessary, with padding.

Women’s fashion is also said to have "helped define a woman’s place in society" during the '50s. Outfits for home, work (if necessary), running errands and social occasions were separate and distinct, and there was a sense of conformity to style rather than expressing any individuality. This strongly contrasts with contemporary fashion, which, whilst trends exist, is largely used to create a sense of unique identity. I don’t know about you guys, but I don’t have set outfits for housework or going shopping either.

It wasn’t until the mid-1950s that the concept of youth fashion for teenagers really came into existence. Previous generations of teenagers basically just wore versions of the same sort of clothes as their parents, but youth culture started to come into its own during the mid and late '50s. Brands aimed specifically towards teenagers, as well as the introduction of youth-orientated television, movies and music, all contributed towards this phenomenon. More rebellious looks began to emerge towards the end of the decade, with tighter, less conservative silhouettes for women and leather jackets and boots becoming increasingly popular for men. A variety of options became available towards the end of this period of consumerism and conformity, and began to set the mood for the next decade of fashion diversity.

Whilst there are so many great things we can take away from fashion in the 1950s, let’s not forget the privileges that come with being alive in 2015. Let’s not swoon over a bygone time when LGBTQ people and people of color were so fiercely marginalized; when many women did not even have the option to choose work over marrying and having children. An era where you didn’t even really have control over your own reproductive rights.

As Los Angeles Times writer Mike Spencer (who remembers the '50s) writes: “What concerns me is the extremely narrow and unbalanced view of history our children receive from television, resulting in a pervasive and terrible ignorance of our nation and its roots and negating the great strides our society has made.” Whilst I enjoy wearing vintage '50s or 50s-inspired clothing, I enjoy that I can combine said clothing with a pair of dinosaur leggings and Dr. Martens boots, and that the wide range of choices I have available to me as a woman in 2015 extend much further than just fashion.

So rock those gorgeous '50s frocks if you like, but let’s not romanticize an entire decade when people were fighting so hard to get us to where we are today.

More like this
Gen Z Are Twice As Likely To Identify As Queer, According To New Data
By Sam Ramsden
What The UK Blocking Scotland’s Gender Recognition Bill Means
By Sam Ramsden
Adam Lambert Called Out The George Michael Biopic Over Potential Casting
By Sam Ramsden
The UK Government Is *Finally* Banning Conversion Therapy
By Sophie McEvoy
Get Even More From Bustle — Sign Up For The Newsletter
From hair trends to relationship advice, our daily newsletter has everything you need to sound like a person who’s on TikTok, even if you aren’t.