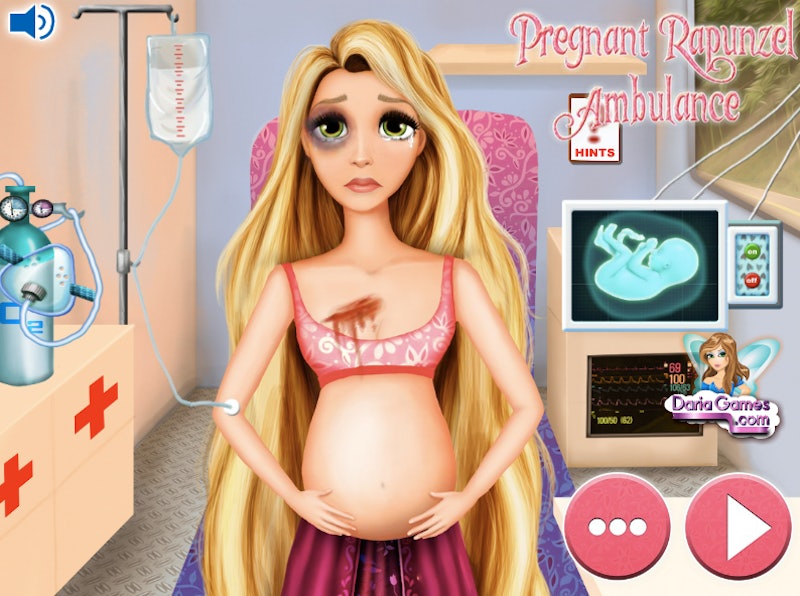 There's nothing new about weird sexual fetishes that reduce women to single-faceted objects for someone else's enjoyment. There's also nothing new about games indoctrinating girls, from a young age, to aspire to motherhood. Alone, you might see a problematic absurdity in both, but put the two together and things get really creepy. A new trend in mobile gaming, that can be identified broadly under the umbrella of "pregnant mommy games", is downright terrifying. Each game has its own kind of pregnant mommy, but all the games seem to have a couple of things in common:

On their face, the games seem targeted towards young girls, given that they're all PG-rated. Daily Dot's Mary Emily O'Hara writes:

"Because these apps straddle the thin line between bizarre children's game and X-rated fetish fantasy, it's unclear precisely who the target audience is. Sure, they're marketed to little girls; they incorporate traditional girlie interests like princesses and shopping. But the apps' obsession with rotund bellies and filthy servitude, not to mention invasive surgical procedures, certainly appears to lend itself to fetishism."

However there's a much darker side to them, that upon closer inspection, seems to go beyond just a sexual fetish for pregnant cartoons. Many of the female characters are identified as "cleaning mommy", and your aim is to have them do housework. Some of the women appear battered, with black eyes. Many are your favorite Disney characters. And there are even some where you're able to perform an emergency C-section.

Since reading about pregnant mommy games, I've been sucked into an Internet hole of exploration. What I've said so far about these games doesn't do justice how bizarrely creepy they really are. So, in lieu of trying to describe how uncomfortable pregnant mommy games are, here are some of the most truly disturbing iterations of the game I could find so you can see for yourself:

There's a lot of fetish in anime already. Add to that an almost-naked pregnant woman laying on a bed and winking at the game player, waiting to be "dressed-up" and you're going to struggle to suggest this game has nothing to do with fetish.

The description for this game reads, "Rapunzel is pregnant and she will bring in to this world a beautiful baby soon, but right now she has an emergency. She fell down the stairs and she hurt herself. Her life and the baby's life is in danger, but you can save them both. Play this game and follow the directions to heal Rapunzel and the baby." Except Rapunzel has a black eye... and "Fell down the stairs" is one of those excuses you used to hear on Degrassi Junior High to disguise a domestic beating. Considering Rapunzel is a character who was locked up against her will, this all feels incredibly uncomfortable.

"See the little bump in Mommy's tummy? You're right, you're gonna have a tiny new sibling!! But Mommy's so tired from all the morning sickness. Why don't you give mommy a nice little makeover to make her feel fresh? Mommy would be really grateful!" This one literally turns a pregnant woman into a fetishized doll you can customize to suit your proclivities.

Last time I checked Dora the Explorer hadn't even hit puberty yet. If indeed this is the brain-child of fetish we've officially passed into horrifying Lolita territory...

There are lots of "Messy Pregnant Woman" themed games, that all involve cleaning up a pregnant woman who looks like she's been dragged through the wilderness. O'Hara says, "As I plucked twigs out of her skull with the conveniently supplied tweezers, I couldn't help but think, My god, what happened to her? Is that... is that blood?! Cleaning up a pregnant assault victim and/or sploshing fetishist: good, clean fun for the whole family."

Here's pregnant Rapunzel again, who this time has to "recover from an accident" while reclining in some exotic boudoir in a hyper sexualized pose.

Here's your chance to cut open a pregnant cartoon to remove her little cartoon baby! The surgery we all thought we never wanted to perform is now at your fingertips!

More like this
The 19 Best Tweets & Memes About Bisexual Awareness Week
By Lexi Inks
Black Women's Equal Pay Day Highlights An Upsetting Problem
By Brandi Neal
Breeding Kinks Have Been On The Rise Since Roe V. Wade Got Overturned
By Lexi Inks
Are Quality Time & Gift-Receiving Love Languages Compatible?
By Lexi Inks
Get Even More From Bustle — Sign Up For The Newsletter