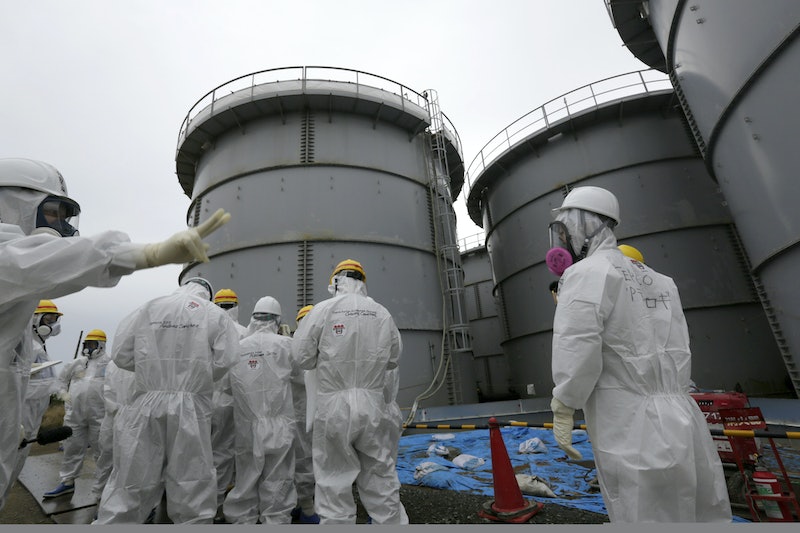 Meet Naoto Matsumura: Dubbed alternately as “The Radioactive Man” and “The Last Man in Fukushima,” Matsumura is the sole resident of Tomioka, a small town close to the Fukushima Daiichi plant in Japan, the site of one of the worst nuclear disasters in history four years ago. Why is this fifth-generation rice farmer risking his life by staying in a dangerous radiation zone? To care for the animals abandoned in the wake of the disaster.

In March of 2011, an earthquake caused a tsunami to form off the coast of eastern Japan, hitting the Fukushima I Nuclear Power Plant, causing a major nuclear meltdown in the plant’s nuclear reactors and releasing dangerous amounts of radioactive material into the surrounding environment. It was the largest nuclear disaster since the Chernobyl accident in 1986. While the authorities have continued attempts to resolve the situation in the years following—by building, for example, a 470 million dollar ice wall to contain radiation leaks—the area surrounding the plant is still uninhabitable due to high levels of radiation.

After initially fleeing Tomioka with his parents after the disaster, Matsumura returned to the town to take care of the animals on his farm. As he describes in an interview for Vice, he stumbled into becoming the caregiver for many other abandoned animals in the area, simply because there was no one else to care for them:

Our dogs didn’t get fed for the first few days. When I did eventually feed them, the neighbors’ dogs started going crazy. I went over to check on them and found that they were all still tied up. Everyone in town left thinking they would be back home in a week or so, I guess. From then on, I fed all the cats and dogs every day. They couldn’t stand the wait, so they’d all gather around barking up a storm as soon as they heard my truck. Everywhere I went there was always barking. Like, ‘we’re thirsty’ or, ‘we don’t have any food.’ So I just kept making the rounds.

In the last four years, Matsumura has come to care for quite a menagerie: His charges include dogs, cats, cattle, ponies, pigs, and even a few ostriches. By staying near Fukushima, he is seriously risking his heath, living with up to 17 times as much radiation as people are normally exposed to and unable to eat food grown in Tomioka or drink water from the area due to radiation contamination. Doctors have told him that he has the highest level of radiation exposure in the country, though, as he tells Vice, he doesn’t seem to mind it too much, saying, “[T]hey also told me that I wouldn’t get sick for 30 or 40 years. I’ll most likely be dead by then anyway, so I couldn’t care less.”

You can learn more about Matsumura and his work on his Facebook page. Scroll down to see images of him as he cares for his animals:

Find more pictures in this slideshow: