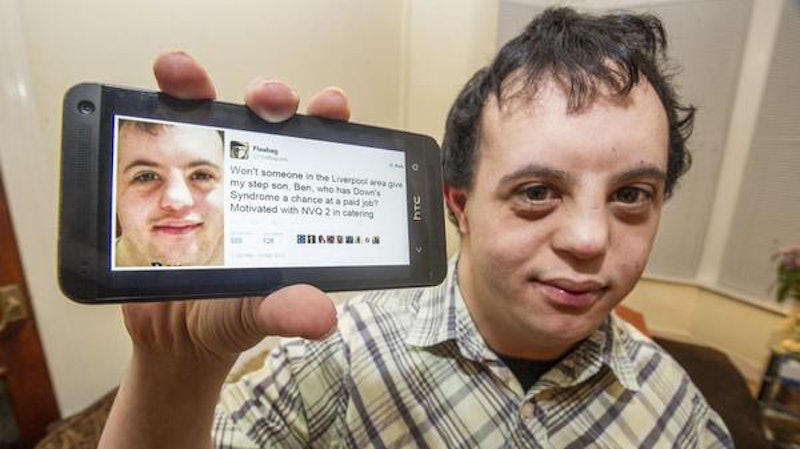 The internet is a mess, guys. Sometimes you just wanna shut the whole thing off and walk away like a tantrum-throwing kid that needs to be put in a timeout. But every now and then, something so heartwarming and wonderful happens that we have to forgive the internet for its faults, and today is one of those days. Right now #GiveBenAJob is trending on Twitter in an effort to find full-time employment for a man with Down Syndrome in Liverpool. His stepmother Fiona Hodge had no idea when she tweeted out a plea for help in finding him a job that it would go viral by the end of the week, and now that it has, Ben has an entire army on Twitter on his side.

Ben Small, 26, has an NVQ 2 in catering, and a lot of unpaid experience. His stepmother says that he has been employed at major chains like McDonald's, but never on a full-time basis. What he really wants, she says, is to be a baker, but that he would be satisfied with any kind of full-time employment at this point.

"It just started off as an off the cuff comment from Fiona about putting it on Twitter and it’s really taken off. It’s been absolutely mad. Of a night we just sit there looking at each other saying 'My God!'," said Ben's father Mike in a statement to the Liverpool Echo.

Here is the original tweet that inspired the campaign:

Fiona's message was tweeted hundreds of times, partially because of the support from Boothby Graffoe, a musician and comedian with a large Twitter following.

Soon thousands of other people on Twitter, including some celebrities, starting tweeting out the campaign.

Good news from the campaign front: according to his stepmother, Ben now has three offers that he is considering. Among them are a position at Costa Coffee, at a family-run restaurant, and at a school for children with autism. He is continuing to send his resume out, but his father says that they hope to have his full-time employment secured within the next few weeks.