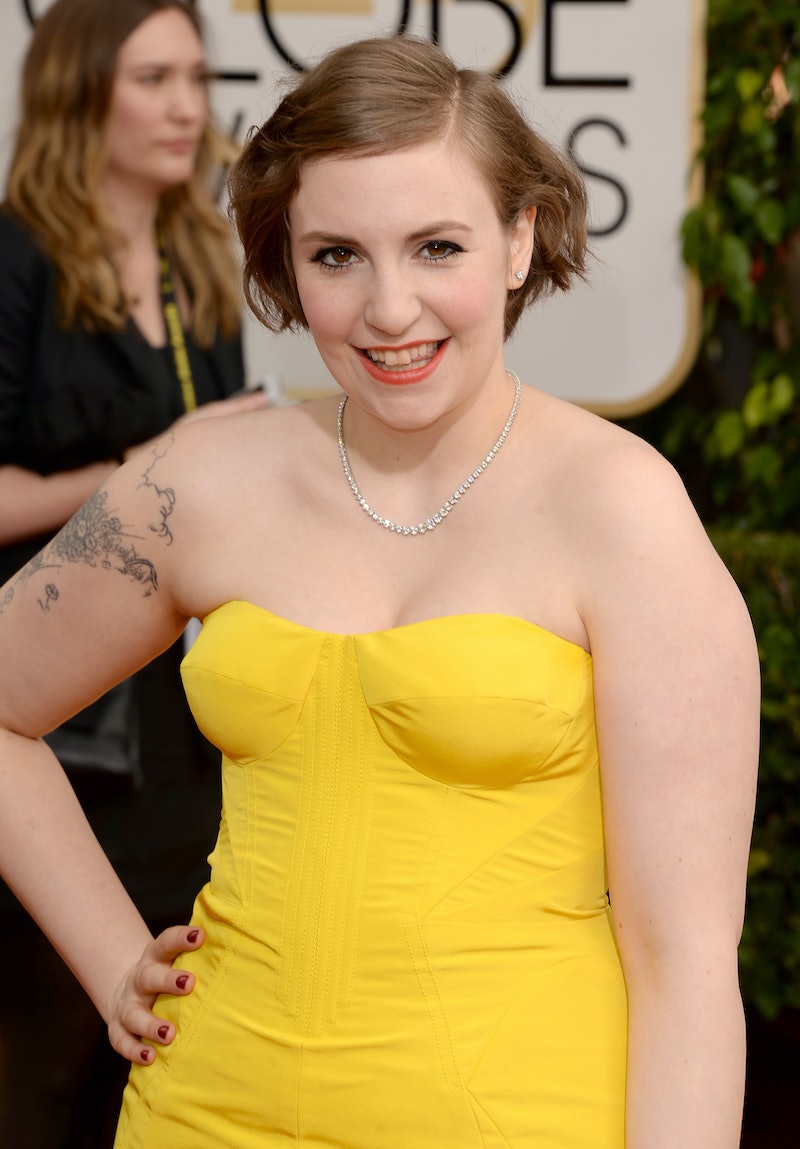 It is officially the week of celebrity hair makeovers. Christina Aguilera went brunette, Christina Hendricks revealed golden locks, and Hillary Duff dyed her tresses a mermaid blue à la Kylie Jenner. It seems celebs are now changing their hair per their every mood, and, honestly, I can barely keep up. Now, another famous face has hopped on the transformation bandwagon. Lena Dunham revealed a super short pixie cut that is just plain adorable. All I have to say now is, move over lob — the pixie cut has arrived and it is about to land on the heads of Hollywood's greatest.

The Girls creator debuted the unexpected style on Late Night With Seth Meyers on Wednesday night, and was beaming with confidence. She even joked around, saying "I'm premiering my haircut!" using air quotes and all. She is clearly excited about her new look. The barely there 'do was neatly slicked down and features texturized, asymmetrical bangs. Dunham's hair also appears to be a lighter shade of brown than her previous hue.

Although the quirky actress is no stranger to dramatic hairstyles, toying with bowl cuts, bobs, and mint green shades in the past, she has never gone quite this short before. Nevertheless, the style suits her personality so well and looks as chic as ever.

The pixie is not a novelty in celebrity-land, but I predict it's going to make a major comeback as the weather starts to warm up. In hopes of the pretty pixie replacing lob, let's review all the celebrities that have gone ultra-short before, shall we?

So what do you think? Who else will bring back the pixie?

More like this
Tati Gabrielle Relives Her Best Hairstyle Moments
By Olivia Rose Ferreiro
Halsey Debuted A Copper Pixie Haircut, & It's Such A Fall Vibe
By Olivia Rose Ferreiro
The Chicest ’90s Updo Hairstyles To Try
By Paris Giles
Lily Collins Got Shaggy Curtain Bangs For Emily In Paris Season 3
By Audrey Noble
Get Even More From Bustle — Sign Up For The Newsletter