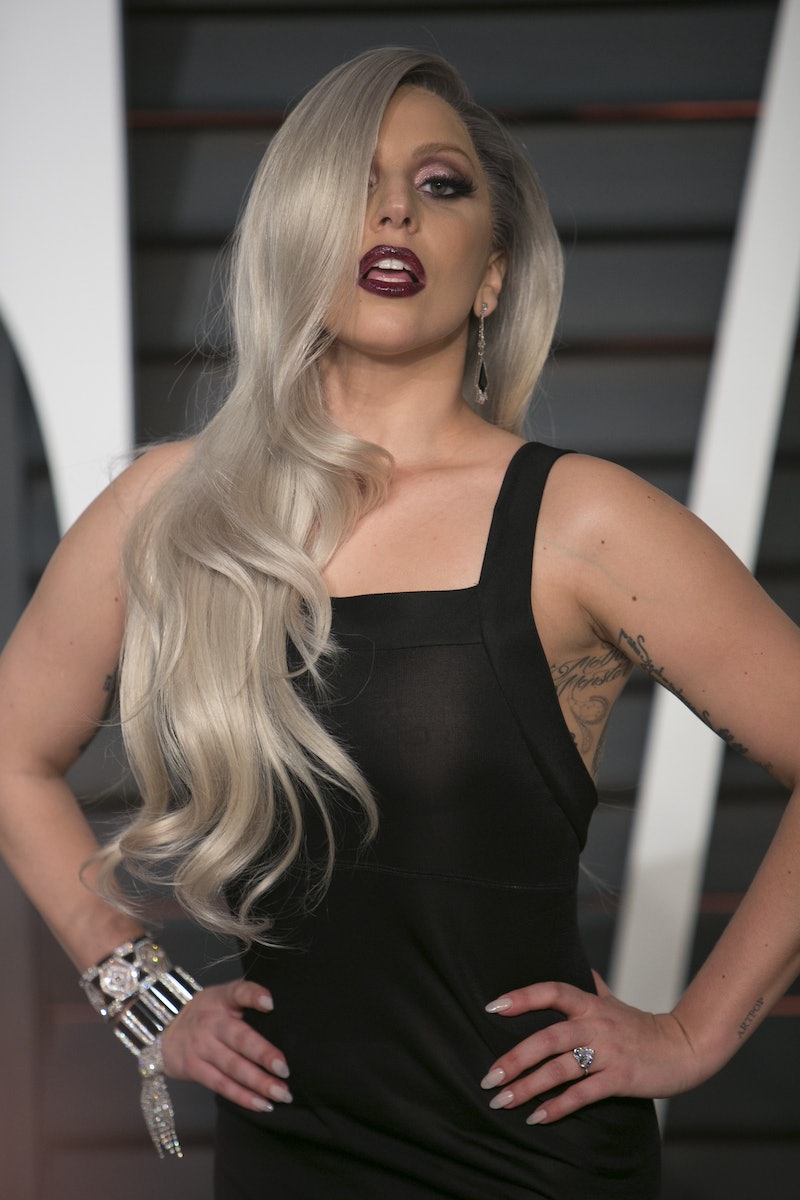 Lady Gaga's oft-changing looks are usually uniquely her own. But there are plenty of times she takes inspo from others and incorporates it into her own style. Gaga's jazz-inspired looks while promoting her Cheek to Cheek standards record with Tony Bennett, all had Gaga-fied flair. Gaga has channelled the dark hair and extreme eyeliner of the late, great Amy Winehouse in the past and she is doing so once again.

But before haters start throwing verbal daggers and thinking, "Copycat!," chillax for a moment and understand why this inspiration, however unintentional, is really awesome.

With the new Amy Winehouse documentary poster being revealed, showing the singer's tattoos and only a hint of her face, it's almost eerie and somewhat serendipitous that Gaga's look is similar to Winehouse's right now. It's as though Gaga is filling in the poster's visual gap.

We don't see Winehouse's signature look in the promotional image; we merely see the lower half of her face. Then here comes Gaga, paying what seems like unintentional yet respectful homage.

Crazy how that works, right?

But let's be clear about something. It's not reductive, to borrow a phrase from, ahem, Madonna. It's no straight copying nor is it unoriginal. Gaga's take on Winehouse reminds me of how Madonna used to offer her '80s-infused and modernized take on Marilyn Monroe. While Gaga and Winehouse were peers of the same generation, there is nothing wrong with Gaga expanding on that look.

It's such a tease, since we merely see some of her lips, her piercing, and a tiny bit of her nose, along with those stick-and-poke style tattoos.

Here's Gaga. The bangs, the liner, and the pearls are both ladylike and edgy at once. They are also from the Winehouse style playbook. And, as stated before, it provides the missing pieces of the puzzle that we don't see in the documentary poster.

I have no issue at all with Gaga going Winehouse with her look. Granted, black hair, extreme liner, and tattoos are not to sole domain of one celeb. There's just a cosmic symmetry here that I can't deny. Like why did Gaga return to this look now?

It's as though a little piece of Winehouse lives on via Gaga, thanks to some Instagram posts and Gaga changing her look on whatever whim came to her that day.

More like this
'The Parent Trap's Elizabeth James Was Basically Princess Diana & These Looks Prove It
By Orla Pentelow and Claire Fox
Harry Styles’ Red Carpet Looks Have One Thing In Common
By El Hunt
Everything You Need To Know About ‘Black Panther: Wakanda Forever’
By Bustle Editors
Christian Bale Sang With Taylor Swift & His Daughter Can't Believe It
By Radhika Menon
Get Even More From Bustle — Sign Up For The Newsletter