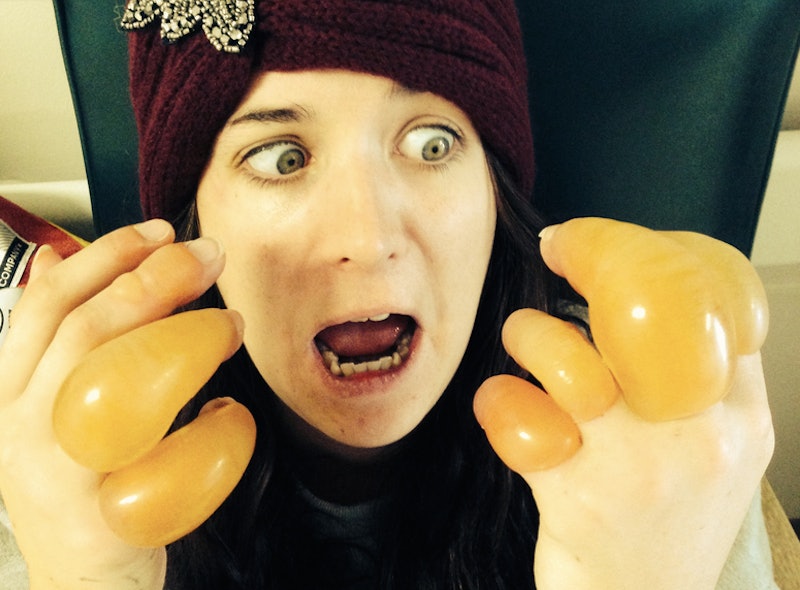 This is why you don't get blackout drunk, kids. Earlier this week, Imgur user TheBassistsMuse chronicled her frostbite recovery online, and unless you've seen frostbite up close and personal before, these images are the stuff of nightmares. Seriously. Don't keep reading unless you're feeling particularly brave today, because I literally squeaked and had to stop myself from slamming my laptop shut when I saw some of them.She ended up in the hospital after an alcohol-fueled night with friends celebrating her move to Saskatchewan, Canada, from Australia, Cosmopolitan reports. Although you'd think that hailing from the country of "Nopeland," as she put it, would make Canada pretty easy living in comparison to her life thus far, such logic is useless in the face of drunken misadventures. By the time midnight rolled around, she was blackout drunk, with "no phone, no money, and no idea where [she] was." The last time anyone spotted her was around 2:30 a.m... until she woke up in the hospital the next morning after being found at 5:45 in the morning, with no memory of the night before. Oh! And a moderate case of hypothermia and frostbite. You know, typical night out stuff. The frostbite hit her fingers the worst, as you can see in the photo below, taken 20 minutes after she was found.

The nurse told her that at best, she keeps her fingers. At worst, she loses the hand.

Painful blisters started showing up, thanks to her skin cells dying and reforming.

Aaaaand they just kept getting worse. She wasn't allowed to pop them, with the exception of one finger "springing a leak" of its own volition over the next few days. Here comes the worst part:

<img alt="no animated GIF " src="http://media.giphy.com/media/Hqhqgu76Sz9vi/giphy.gif" class="article-body-image"/>That particular photo is from the day the doctor popped them. Apparently, he needed an apron, face mask, and PLASTIC SHIELD OVER HIS HEAD to do so. Also, pus got on the hospital curtains.

There's her hand after the procedure.

And that's what it looked like when she posted the photos. She's gotten back use of her hands, although she still might lose a finger. Really makes you realize how lucky you are that none of your drunken escapades ended up like this, huh? But there's one great thing to come out of this! Her doctor's name was Dr. Friesen... a.k.a. Dr. Freezin'.