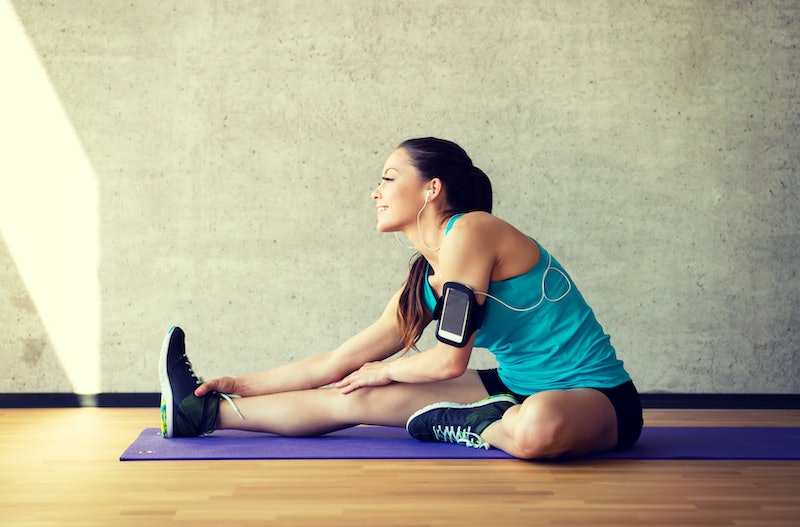 Clueless is a word you could use to describe a lot of my behaviors at the gym, but it’s definitely at its most accurate when it comes to determining what underwear I’m supposed to be wearing. I have no idea which style of panties are the most effective when you’re working out. More to the point, should I even be wearing underwear at all? That’s not a question I often ask myself, but when fitness and underthings converge, no question is off limits. In fact, going commando on the treadmill is actually what inspired this article.

About a week ago, I was in the women’s locker room with a coworker during our lunch hour. She was pulling on her socks when she remarked, “That’s something we gotta talk about the next time we get together with the girls. I wonder if I’m the only one who works out with no underwear on.” I kept my cool, but my not-so-inner prude was taken aback when I learned someone I knew was routinely going commando. But as I stood there with a thong underneath my workout capris, I realized something: I’ve never really been sure about what I should be wearing either. The sports bra is a given, but what about the lower half of the body (which is the part that's usually moving a lot more than the top)?

I decided it was time I conduct an experiment on behalf of all female gym-goers. I was going to try out five common underwear options and measure their efficiency by a variety of criteria. The five underwear options include: commando, thong, boyshorts, bikini, and cheeky bikini. The criteria I’ll be measuring are as follows: Overall comfort, wedgie factor, visible panty lines, and moisture wicking. So yes, clearly things are going to get personal here, but I promise I’m going to the limit the TMI details to a need-to-know basis.

You know how some women don’t wear underwear in public in certain circumstances? Well, I’m not one of them. A few times I’ve run out to the convenience store wearing sweatpants without underwear, but that’s mostly because when you’re wearing sweatpants, your whole crotch is a mystery. I wanted to start with commando because this one is probably the furthest outside my comfort zone.

The best part of going underwear-free at the gym is there were no wedgies or unseemly panty lines to worry about for the duration of my workout. It was actually very freeing, like I was a modern-day Xena: Warrior Princess, running through the forest like a badass with no underwear on under her armor. But that was a bit too free for my taste. The threat of unrestrained camel toe has never hit closer to home. Even worse, as I stretched, ran, and did sit-ups, I constantly feared some horrible accident would happen — like what if this is the day I rip my pants doing squats or suddenly develop irritable bowel syndrome? It’s unlikely, yes, but still a consideration for the reasonably paranoid gym-goer.

I must admit, though: I liked that my lady areas felt a lot less suffocated. I was fully empowered to move my lower body any way that I pleased. Everything was “breathing,” as they say. The downside of this nakedness is the potential for visible butt and crotch sweat — because yes, those areas sweat, and we don’t need to deny it. We’re all friends here. Underwear provides a barrier between the sweat and your attire that going commando just doesn’t offer.

Objectively, going commando is a legitimate option at the gym if you can be comfortable with it, but if you’re like me, you’ll probably spend your entire workout expecting a spotlight to center on you while some omniscient gym commentator announces, “That girl on the Stairmaster isn’t wearing underwear! Treat her differently!”

Thongs can be polarizing. There are women who swear by them, and others who think they're the worst. When it comes to the gym, there was a time where I was skeptical about wearing something so revealing just to get sweaty and gross, but after surviving my share of bad wedgies and uncomfortable bunching, thongs have become my personal favorite. But let’s examine the facts:

Technically, a thong doesn’t feel that much different than going commando. A thong is essentially a sexier, double-sided loincloth, after all. A lot of women turn to the thong as their go-to gym underwear because it's pretty much invisible under spandex. The key is to choose the right kind. For instance, the lacy type you wear in the bedroom probably isn’t the same one you’d wear for a rousing morning workout on the elliptical. Despite being so bare, thongs can rub you the wrong way in places you don’t want to be rubbed the wrong way, so finding the right fit and fabric is important.

If you’re staunchly anti-wedgie, thongs probably aren’t for you. I’ve given thongs a B in this category because they're kind of an intentional butt-highlighting wedgie. But because of their design, they don’t necessarily feel wedgie-ish (new word) in the way other underwear does. Like going commando, thongs provide the privilege of having your full range of motion with nary a panty line to be seen. Post-workout, my cotton-blend thong was pretty sweaty, which made it clear it might not be the best for wicking moisture and heat.

Overall, I liked having a barrier — albeit a skimpy one — between my lady bits and my yoga pants. The thong is a nice middle ground between having no coverage and a little coverage, but it’s probably best suited to ladies who already swear by thongs outside of the gym.

Boyshorts are the go-to lounging-around-the-house-eating-cereal-for-dinner underwear for many women, but how do they hold up at the gym? Since they’re like a tiny pair of shorts, I figured these would be as comfortable sitting on a bike in spin class as they are lying on the couch. Unfortunately, I was both surprised and disappointed by what I noticed when I wore boyshorts to workout.

I’ve grown used to boyshorts bunching up over my thighs and into my butt. My lower body just isn’t conducive to underwear resting flat and ripple-free like it does in lingerie catalogs. Most of the time, I think it’s cute. Well, lemme tell ya, it felt a lot less cute when I was on a bike in spin class pedaling through one of the worst wedgies of my life. You will never be angrier about all the mirrors on the wall at the gym than when you desperately need to a pick a wedgie. Even after I had the chance to adjust myself with some level of discretion, it wasn’t long before the boyshorts had re-wedged. Regardless of whether I did cardio or strength training, the bunching seemed unavoidable. This may be due to my proportions or the material of the boyshorts I was wearing, but it’s worth noting.

Compared to the thong and going commando, boyshorts felt surprisingly oppressive and restricting. There was plenty of coverage, and they were great for sopping up all my butt sweat, but it felt like my ass was suffocating inside a sweat lodge without the benefit of peyote to make me forget how gross I felt. There were definitely visible panty lines to deal with as well, but because boyshorts resemble regular shorts, it didn’t seem like a big deal. They definitely have a lot of potential to be a great, maximum coverage option when you’re working out, but I think the key to fitness-ready boyshorts is finding a pair in the right material that will work with your body and your fitness routine.

The traditional bikini is a staple in most women’s unmentionables' drawer. With its classic, comfortable cut, I wondered if the bikini could be as versatile at the gym as it is in every other area of life. I was pleasantly surprised to find out that it was.

I did jumping jacks, suffered through crunches, and ran on the treadmill, and the bikini held up really well. While I fell victim to a minor wedgie here and there, I was always able to fix it with that weird wedgie speed walk we do when we’re in a public place with an underwear-in-butt situation. Combating wedgies and bunching wasn’t a constant struggle like it was while wearing boyshorts. Maybe it’s the cut that makes all the difference, but the bikini definitely felt a lot less suffocating than boyshorts did. But alas, there were panty lines. Oh, the panty lines! They were pretty bad. Perhaps a pair of those seamless, no-show options would have a different outcome, but having two pronounced diagonal lines crossing your butt is as good a reason as any to give up on squats early.

All in all, I think the bikini is probably the most adaptable option for the gym that we’ve seen so far. Because it fits all shapes and sizes, the bikini is fairly impervious to serious wedgies and uncomfortable bunching. Better yet, it provides full coverage without making your lower body feel heavy.

A “cheeky” is variant of the bikini. The coverage in the front is the same as a classic bikini, but a cheeky shows a little more cheek in the back. It’s not as revealing as a thong or a tanga, but it is a bit more bare then a regular bikini. Given the popularity of the cheeky, I was curious about how it would hold up when put to the gym test.

In many ways, the cheeky fared the same as the bikini, but with a few notable differences. I experienced the occasional wedgie like I did with the bikini, but most of the time it resolved itself as I kept moving — something that cannot be said of the boyshorts I tried. I’ve come to the conclusion that the less fabric there is to wedge, the less awful random wedgies feel when you’re moving around. In terms of sweat, the cheeky provided a nice balance between airing things out and covering things up, which I liked a lot. The visible panty lines caused by the cheek were more subtle than the bikini, but they were definitely still there. As a whole, the cheeky might prove a good option for those who prefer a little less coverage in the back with all the other benefits of a bikini.

Ultimately, while some styles of underwear might be prone to causing wedgies, friction, or suffocation, the best way to find what undies work best for you is to experiment. I know that sounds like a cop out, but it's true. I probably won't be going commando under my yoga pants anytime soon, but that might completely change another gal's life. When you're looking for your own personal best pair of workout undies, consider the fit, material and moisture-wicking potential relative to your workout routine. With a little experimenting, we can all get to a wedgie-free place, because you're already suffering enough at the gym.