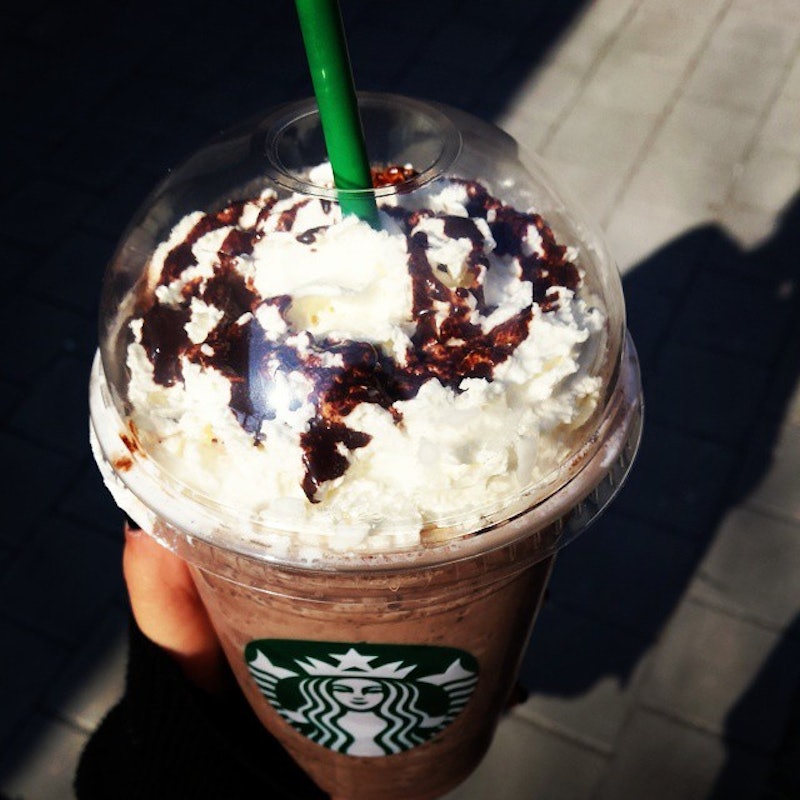 We already know that a Starbucks delivery service has been in the works for a while — but now it's one step closer to becoming a reality: The coffee chain announced yesterday that Starbucks' app-driven delivery service would begin testing in two locations this year. Sometime in the second half of 2015, the service will be rolled out in Seattle and New York City; and from there? THE WORLD. Or… something. I mean, I'm sure that eventually it will go worldwide, but one step at a time, right?

Like so many of the coffeehouse chain's recent innovations, this one is intended to boost both interest in its app and in its rewards program. In fact, the two are inextricably linked; in order to use the Starbucks app in any capacity, you have to join the rewards program first. According to Starbucks itself, the members of its rewards program purchase more items from the company than customers who haven't joined; since this is a pretty good indication that the program is accomplishing its primary purpose in life, it's likely that we'll be seeing more promos and deals hooked to it as time goes on.

In any event, the most interesting thing about the delivery service tests is this: They're trying out different methods in each location. I'm not sure whether they're trying to figure out if one of the two methods is better, or whether it's an indication that the service will differ depending on the unique quirks of each location in which it will eventually arrive; either way, though, it's worth watching. Here's the lowdown on how the service will work in each of Seattle and New York:

On Starbucks' home turf, the service will partner with Postmates, a sharing economy courier company that aims to get local products delivered to customers in an hour or less. Like most sharing economy services, it relies on independent contractors with transportation of their own — bikes and cars, mainly — to get the job done (think Uber, but for deliveries of all types). Starbucks customers in Seattle will be able to place their orders through the Starbucks app; then their coffee will be brought to them by a Postmates courier. Postmates CEO Bastian Lehmann told the Seattle Times that the details of exactly how this partnership will work are still being worked out — but there will be a fixed delivery fee, so be prepared to shell out a little extra to have your coffee delivered directly to your hot little hand.

The New York version, on the hand, goes under the moniker “Green Apron delivery service”; it will harness the power of the fact that there are Starbucks locations on pretty much every block (well, almost every block). The service, which will initially launch only in the Empire State Building, will use employees of Starbucks stores located inside specific buildings to deliver just inside that building itself. Starbucks chief digital officer Adam Brotman told the Seattle Times that the store will have a space set aside specifically for getting delivery orders ready in the interest of not slowing down orders coming in by foot traffic. Beverages will be delivered by 'Bux employees clad in the chain's classic green apron (hence the name of the service); however, whether or not these green apron folk will be the store's actual baristas or dedicated delivery people remains to be seen.

Not going to lie, though: As neat as both of these delivery methods are, I was kind of hoping for something a little… showier. I realize these other options I've just cooked up are horribly impractical — but I can dream!

But not just any drone; this hilarious Star Wars speeder drone. Think the person who made it might be willing to produce them on a large enough scale?

It worked for grilled cheese, so why not caffeine? Well… on second thought, it's actually highly likely that hot coffee descending from the sky via a tiny little parachute might go horribly wrong… but maybe someone will be able to figure it out. After all, Haymitch managed to send hot soup down to Katniss and Peeta during the 74th annual Hunger Games, right?

Gridlock isn't a problem when your car is tiny enough to roll underneath all the other vehicles on the road.

Sure, it would be messy… but are pneumatic tubes the best? Yes. Yes they are.

The point isn't the coffee. The point is an adorable penguin waddling up to your desk with a coffee in its flipper. Best. Day. EVER.

I still hold out hope that one day, this essential piece of Star Trek technology will be come a reality.