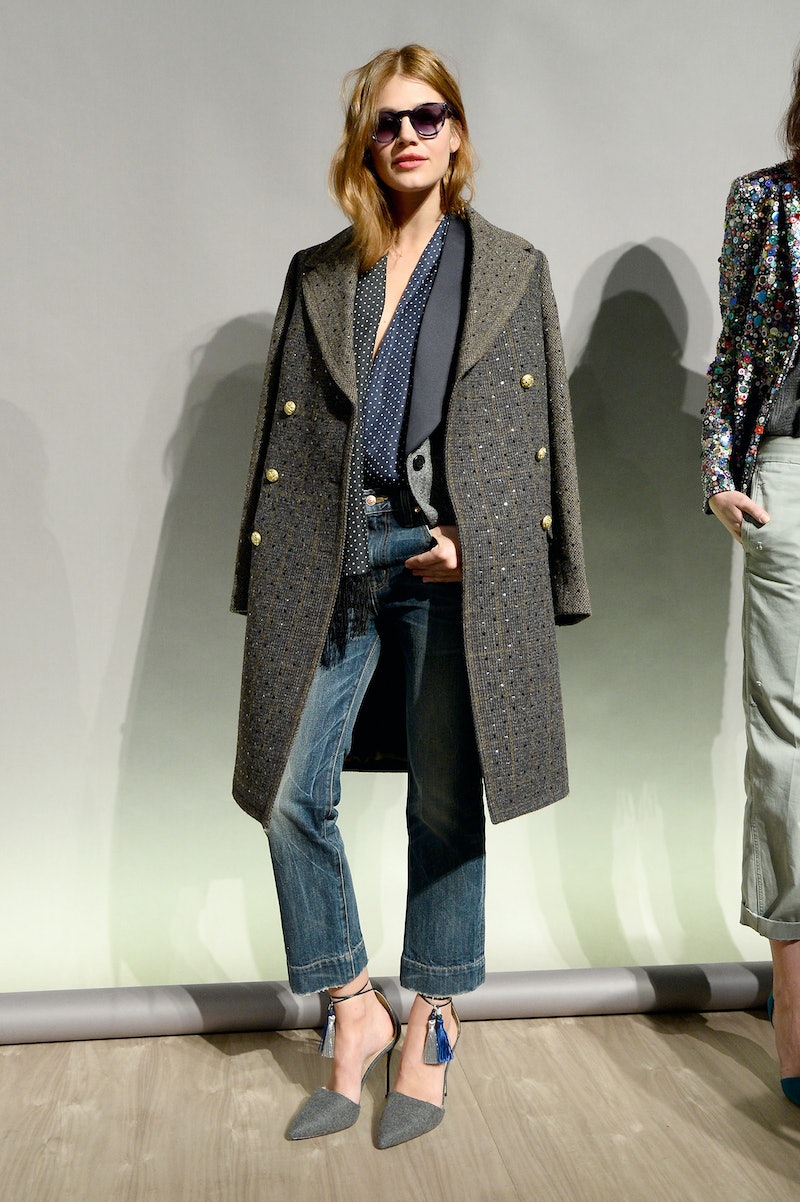 For those of you who live in a four-seasons-a-year place (not looking at you, West Coasters), transitional weather and the daily question of “what do I wear?” that comes with it occurs twice a year, on each outer edge of winter. In October, when one day brings a brisk chill and the next the promise of an Indian summer, and at the end of March. Aside from my mindless habit of incessantly checking Weather.com, I noticed New York had entered the season of transitional dressing the other day when I was riding the subway. The temperature outside was supposedly 52 degrees, but there was a wind chill and it was one of those days when the sunny side of the street felt 10 degrees warmer than the shady side.

I was wearing a long twill coat with wool sleeves, the man next to me was wearing an unzipped Canada Goose parka, and a woman on the other end of the car was wearing a tiny leather jacket and a wool beanie on her head. I was underdressed, the man in the down coat was overdressed, and the woman looked like she had tried to forgo comfort for the sake of looking cool. We were each dressed for a different climate, or more accurately, for New York City at the beginning of spring.

Transitional weather brings a lot of confusion to the outerwear department. Spring is in the air, and as much as we want to rush the seasons and flaunt our bare legs, the temperature outside is easily swayed by the elements, namely wind and rain. March is the light at the end of the tunnel when we can ditch the all-purpose winter coat we were so excited to buy in November, wore once in December, and lived in during January and February. We have the freedom to choose, but that’s the problem — there are too many options.

As has been the case in past years, I tend to become overwhelmed with the variety of spring jackets that I end up not buying one at all and instead complain my way through May. Psychologists have showed that too many options actually inhibits people from making a choice, or from choosing in their best interests. I refuse to let the plethora of overcoat options in this exciting, post-boots-with-the-fur time paralyze me, which is why I’ve done a comparative study of the transitional outerwear landscape.

When I think of spring jackets, I first think of trench coats. Trench coats are not trendy per se, but they are classic. The fact alone that they will never go out style makes them an item worth purchasing. I once read a Fodor’s Travel guidebook to Paris that had a special style section on “how to dress French.” It came with a picture of Audrey Tautou and deemed a trench coat the key item to dressing like a French woman. Aside from being timeless and chic, they’re practical in spring weather because they can handle rain and are easy to layer with a thinner jacket underneath.

Another key item to both successfully transition to spring and look French is a leather jacket. I like the idea of leather jackets and think they have a magical power to spice up an otherwise boring outfit, but I find their snugness uncomfortable. If you’re like me and tend to be colder than the average person, then you’ll find them to be an insecure piece of outerwear. However, I like them when layered with roomier and heavier pieces, like a twill coat, down vest, or a poncho. Bulky but warm.

Each year in both the fall and spring, I entertain the idea of buying a waxed jacket. For the first 18 years of my life, the only people I knew IRL who wore waxed jackets were middle-aged men like my dad. Then I went to college and met people my age who had gone to boarding school, used summer as a verb, and wore waxed Barbour jackets. I was intrigued as I am with all articles of androgynous clothing but soon realized it was a case of “good for you, bad for me.” The thick cut made me look boxy, a detail I fail to remember whenever I see it worn by a detective on a British drama or on a J.Crew model. I’ll always want one.

I’m probably drawn to Barbour jackets because I’m a sucker for baggy coats. If I’m going to drown myself in fabric, I’d rather look like an amorphic blob than a box, which is why I like oversized swing coats and car coats. The right one has a minimalism similar to a trench coat and is made of a thick material akin to heavy cotton. COS has a few options right now with varying collar styles that do the trick.

Coat with Ribbed Neckline, $175, Cos Stores

Perhaps the least practical in keeping warm but most essential to any wardrobe is the jean jacket. Jean jackets are similar to leather jackets in that they pull together an outfit, but I find them useless against the elements.

The Gap always has affordable ones that you can buy without having to wear enough times to get your money’s worth. Although, they might be best for the spring-to-summer transition rather than the winter-to-spring one.

The problem with spring coats is that each works for a unique occasion, which from a shopaholic’s perspective means that you need one of every style. Uh oh.

More like this
Genius T.J.Maxx Shopping Hacks For Sales On (Almost) Everything
By Kelsey Stiegman
10 Corsets That *Actually* Work For Big Boobs
By Bella Gerard
Serena Williams Looked Like Royalty In A Bodycon Velvet Dress
By Allie Fasanella
The Best Seamless Underwear To Banish Panty Lines Under Tight Clothes
By BDG Commerce
Get Even More From Bustle — Sign Up For The Newsletter