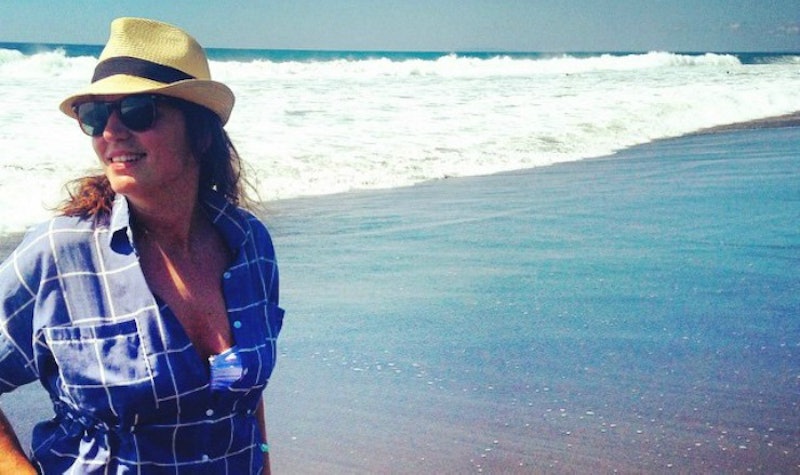 Dear In The Past Liz,

Hi. It’s me, you! See that? We’re still hilarious. So, let me start this letter by stating something very obvious to me, and not so much to you (at all) right now. Something you’ve probably heard in unison from all your friends — side note: I really hope you’ve weeded out any toxic ones by now — but this is me (you!) talking, so you know it’s true: You’re going to be fine. Right now I know that seems impossible. Like actually, physically impossible. You can’t comprehend the feeling of getting over a breakup, starting over from square one, and that’s understandable, because admittedly it is quite overwhelming.

All you can feel is your pain; all you can see is the road in front of you that leads straight into Alonetown, USA —conveniently a stop over from Poundtown, where I heavily suggest you visit a lot more now. (More on that later.)

I know you also want answers. And you’ll do just about anything to get them. Well, let’s just go ahead and take care of that right now: You won’t get any. Ever. At least from him — aka the only ones you’re looking for now. First of all, there aren’t any real answers. Things fall apart, they just do.

Here’s the best part about all of this, however: You’ll provide the answers. And your mind will be blown.

Here’s what else I can tell you without any uncertainty: This relationship wasn’t meant to work out. If I’ve learned one thing from the future it’s that we’re wrong about a lot. It’s not necessarily a bad thing, it’s just a fact. The people we think are meant for us, well, they’re really just purpose people. It may sound cliche, but if it’s meant to be, it will be. What I’ve learned is that you’re actually luckier for some of these things not working out than if they do; it can be the biggest dodged bullet of all time.

This is a big lesson for us because our biggest blessing can also double as our biggest curse. We’re so fiercely loyal that we sometimes hang on to things — and in this case people — longer than we really should. If I could go back to when I was in your shoes and take one piece of advice, it would be what our Dad told us: Don’t wear blinders. We’re so stubborn, of course we refused to believe we ever had those on. Spoiler alert: You did (and do). That’s why Future You took years to move past the breakup you’re just now starting to mourn. Don’t linger, and do NOT stay in a gray area waiting for him to come back. It will eat up time as fast as Pac-Man eats up those white dots.

Find closure by shutting the door yourself, because believe me, he never will. In fact, he’s counting on you to keep it open so he can slip back in whenever he wants to. Close it. I cannot stress this enough.

That said, when you do move past this break up, and you will, don’t listen to other peoples' opinions on the status of whatever your relationship is with this person. Don’t get me wrong, you absolutely should not be in contact now or any time soon, for that matter. And I’m sorry if your sadness is blinding you to this fact, but you’ll never truly be friends — nor should you, really. You wanted to birth this guy’s offspring for God’s sake.

I’m simply stating that, depending on the situation, this doesn’t have to be a shut out. I’m telling you this because it’s something I just realized was possible very recently when I went to a Knicks game with said dreaded ex and we had a great time. Don’t get excited, you don’t get back together. But DO get excited about this: You won’t want to.

The reason it was so great was because I felt nothing. We were ourselves, it was fun, and for once, the aftermath wasn’t 1) us sleeping together or 2) me wanting to throw myself into oncoming traffic; both scenarios resulting in erasing any and all progress I had made with moving forward. Even though there are twinges of sadness when your realize you’ve really moved on from this person, it’s also completely liberating.

One other thing, you may be single for longer than you expect to be post-break up, because the older we get, the more calculated and cautious we are about entering relationships — especially after being hurt. Don’t let this burn keep you from letting other people in, but also don’t enter into a new relationship just because you want one either. Enjoy being on our own… and then let the person in who betters you. Speaking of which, try to have a better attitude about dating. Future You can tend to be a bit pessimistic about the process. (But she also lives in NYC… I know, right? Look at us!).

My last piece of advice is have a one night stand. In fact, have a few. Because one day you’re going to find this lasting love and wish you did more of that stuff — and we’ve always worried too much about having random sex, which has lead us to be heavy-duty recyclers (and you know I don’t mean glass and cans). There’s this thing called Tinder that will be big in a few years; it will quite literally put meaningless sex at your fingertips.

Also, for the love of God, take a shower. I know you haven’t done that in several days, and just gross.

Your wiser and prettier hair version of yourself,

More like this
10 Ways To Be More Empathetic To Your Partner
By Raven Ishak and Lexi Inks
6 Dating App Tips To Try If You're Looking For A Serious Relationship
By Lexi Inks
How To Politely Reject Someone Who Keeps Asking You Out
By Laken Howard and Lexi Inks
Are Quality Time & Gift-Receiving Love Languages Compatible?
By Lexi Inks
Get Even More From Bustle — Sign Up For The Newsletter