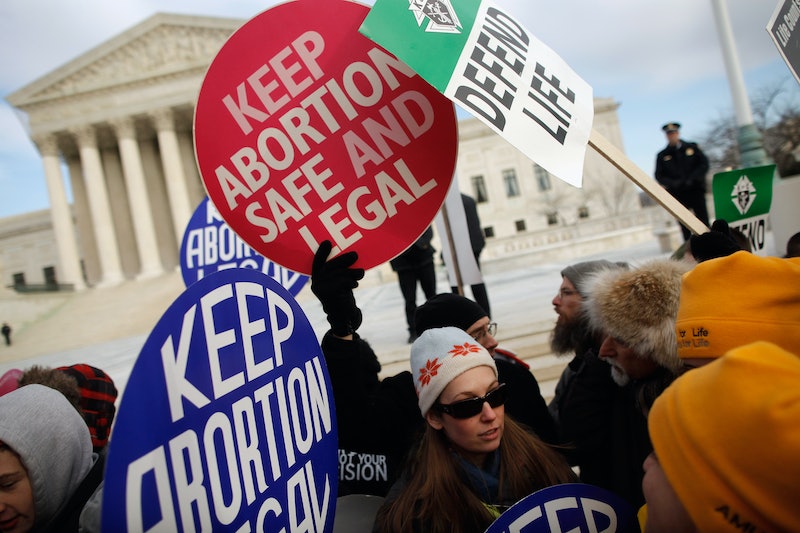 It's no secret that abortion access is a contentious issue, and that both sides of the debate feel pretty strongly about one another. That's is probably why someone sent the anti-abortion group LifeNews a glitter bomb. Or, more accurately, a letter filled with glitter. We don't even seem to be talking about one of those fancy tubes that spray glitter everywhere when you open them, let alone, you know, an actual bomb. But that hasn't stopped LifeNews from trying to use it as a fundraising tactic, painting the glittery piece of mail like it was a real bomb.

The "attack" is one of several recently carried out by a group calling itself "Glitter Bombs for Choice." The group has "targeted" several anti-abortion targets including a Nebraska congressman and the Pro-Life Action League. And the reasons I'm putting all those words in quotes, of course, is because these aren't the kinds of "attacks" that most of us think of when we hear that term — you know, the kind that involve trying to cause lasting, physical harm to people. But LifeNews is apparently taking their glitter bomb very seriously — or at least trying to trick people into giving them some serious funding.

Apparently, LifeNews sent out a fundraising email after their offices were glitter-fied with the subject line "Subject: URGENT! Our office was bombed, we need your help!" According to Jezebel, the email "repeated that funny little turn of phrase twice before admitting that actually they've just been sent some letters with glitter in them from an organization called Glitter Bombs for Choice." It's hard not to look at this phraseology as intentional deception, especially given that LifeNews is also an organization that apparently supports crisis pregnancy centers — you know, the ones that repeatedly and shamelessly lie to women.

The most truly disingenuous part of all this, of course, is the fact that there have been real attacks carried out as a result of the animosity in the abortion debate — attacks involving real bombs that killed real people, many of which have been carried out against abortion clinics by self-proclaimed "pro-life" supporters (though once you start killing people, I'd argue that you no longer get to call yourself that). And while it might seem like such things are surely part of the past, in fact there have been attacks on abortion clinics and staff nearly every year since the first abortion provider was murdered by anti-abortion activists in 1993.

Sure, glitter bombing a person or group of people with whom you disagree may not exactly be the most effective form of activism; although it will ruin someone's day, it probably won't actually accomplish much in the way of change. But if sending letters filled with glitter is really the worst "attack" pro-choice activists have organized against their political opponents? Well, let me put it this way: Despite dozens of "pro-life" attacks on abortion providers and clinics — many of which have been fatal — there has been nothing remotely resembling that level of violence perpetrated by the supposedly "murder happy" pro-choice community. Manwhile, if you look at the website for The Pro-Choice Violence Project, you'll find examples ranging from scuffles outside of abortion clinics between anti-abortion and pro-choice supporters, to abortion-providing doctors who have had their medical licenses revoked, to pregnant women who have been murdered for reasons that have nothing to do with the pro-life cause. In light of all that, LifeNews trying to drum up sympathy for being under "attack" — when all they really need to do is break out the vacuum cleaner — just doesn't sit right.

The truth is that claiming letters filled with glitter are in any way a serious "attack" or omitting the "glitter" part of " glitter bomb" is not only misleading and disingenuous — and especially so when done in order to earn money — but also downright disgusting in light of the people who really have been attacked and killed because of their convictions on this issue. It would be disgusting coming from either side. So let's all agree never, ever to try to paint something as mundane as a glitter bomb as an actual bomb ever again. It diminishes those who have been hurt by actual attacks — and that is never, ever OK.