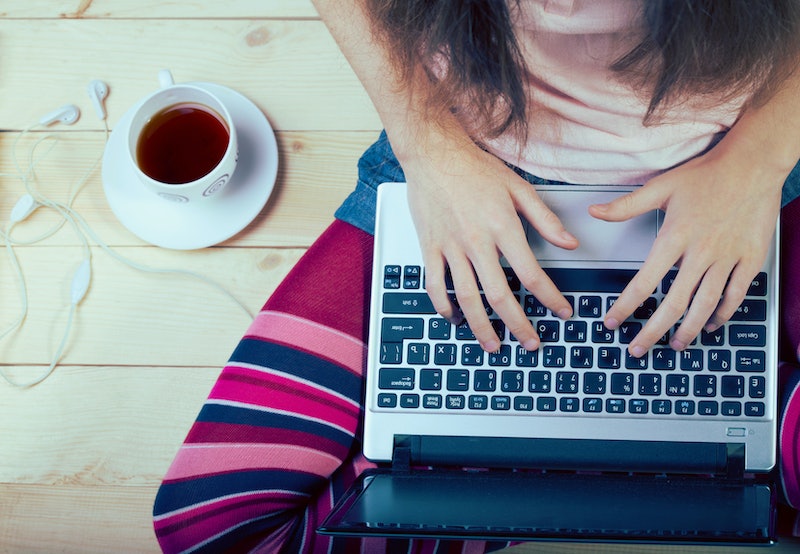 Though one might assume that Austin's 2015 SXSW Interactive festival would be overrun by tech dudes mansplaining the interwebs to rapt audiences of other tech dudes (looking at you Eric Schmidt), women led a lot of the most impassioned discussions and debates at this year's event. Panels titled Sex, Lies, and the Internet, Why Does the Internet Hate Women, and Bustle's own Why Feminism Is Winning the Web specifically touched on why it's become dangerous for women online — whether they're defending female gamers, advancing feminist ideals, taking part in a contentious conversation, or, you know, just existing. Though men and women experience online harassment in similar amounts, the harassment women face tends to be more severe in nature, more often including sexual language, stalking, and death threats.

It's clear that the Internet is a minefield of abuse for women, but it can also be the site of productive conversation in which women's voices certainly need to be heard. And in order to engage in those conversations without fear, the Internet needs to become a safer place for women. Here are some ways to make it that way.

Sixty-two percent of online harassment occurs on Facebook and 24 percent occurs on Twitter (for more data like this check out onlineharassmentdata.org), so it's clear that social media networks need to participate in affecting change — but they're probably not going to make moves themselves unless they see it impacting their bottom line or public image.

Sex, Lies, and the Internet Panelist Emily May, cofounder of the Hollaback! organization protesting street harassment, says that we can make our desires known by protesting and boycotting these sites, and letting the powers that be know that "angry white men aren't the major consumer base. They have to realize there's a much bigger market out there of people who want to use these services.... The people who run the companies themselves have to get rid of this capitalist fear they have.

"Productive creation results from rule enforcement," May says. "All that potential awaits."

YouTube's comment section is known for being a cesspool of Internet trolls, and though people say that Facebook's lack of anonymity makes people less likely to troll there, the stats indicate otherwise.

These platforms need to closely moderate comments in order to protect users from abusive speech — and if people don't comply, they get booted. As panelist Katherine Cross pointed out at the Sex, Lies, and the Internet panel, the right to free speech does NOT give you the right to a platform.

3. Social media networks need to respond to harassment by kicking people off

Once social media networks are motivated to act, they need to start enforcing stricter anti-harassment rules and kicking off offenders. Why is it that a photo of a woman breastfeeding violates the community rules but trolls posting expletives and death threats on someone's page does not? Video blogger and activist Franchesca Ramsey pointed out at the Bustle panel that, if she is able to block an IP address from her website, Facebook should be able to do the same with ease.

4. We need to create safe spaces for women online

Until the rest of the Internet catches up, we need to create safe spaces online where women feel free to espouse their views and engage in conversation without being trolled or verbally assaulted. Enter VProud.TV, which is "a video-driven conversation platform, built for women by women" with a mission to "cultivate honest conversations among women in a safe and nonjudgmental environment."

Should we have to create such spaces, cordoned off from the rest of the Web, in order to make women feel safe on the Internet? No — but having a venue for continuing the conversation, however limited that venue may be, is better than having no space for such discussion at all.

5. We need to educate

Each day, the Internet becomes an increasingly ubiquitous tool in how we conduct our lives, and the learning curve for navigating it isn't in pace with the changing landscape. We need to teach people how to use the beast that is the Internet in an ethical and productive way.

"I think we will increasingly develop ethics for online behavior simply because part of the issue is a generation gap," Katherine Cross says. "As more and more people — and parents — live and work online, that will create the seedbed for new online norms. No more 'these people aren't real' mentality.”