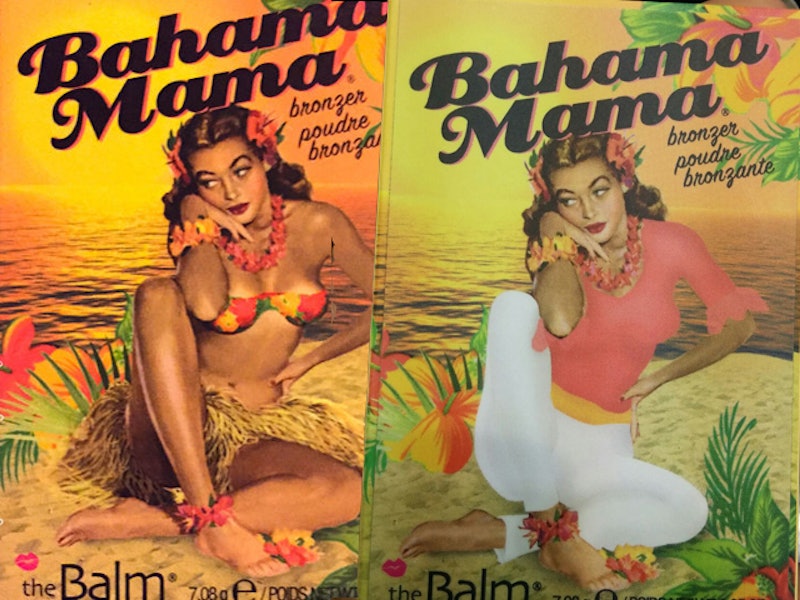 A couple of years ago, I went shopping with my grandmother. We made the always necessary Sephora pit stop to pick up some goodies — mascara, coverup, the usual. When she asked me what blush I usually buy, I mistakenly told her the truth. "Orgasm." I have a feeling that many Hail Mary's were said with me in mind later that day. Surprisingly, some global beauty markets have been feeling the same way, as some makeup companies, such as Bahama Mama, have censored their products overseas. Grandma would be pleased with this news.

Photos of The Balm's bronzer "Bahama Mama" surfaced on Reddit yesterday that showed that the product's sexy packaging had been censored for the Middle Eastern market. The bronzer's namesake Bahama Mama — rocking a voluptuous bikini top and grass skirt over in the good, old, US of A — now looks like she's going to a country club brunch in the blouse and white pants that were added to the bronzer's box. And another Redditor pointed out how Too Faced's "Better Than Sex" mascara has been dubbed "Better Than Love" mascara over in her neck of the woods, because, apparently, sexual innuendo on beauty products could potentially start a sex riot or lead to the complete moral decline of a society or... something.

I always love me a good pun, so when I found out that not every woman has gotten the chance to giggle at "They're Real!" mascara, it brought a tear to my luxuriously mascaraed eye. While I've always pursed my MAC "Rebel" lips to any sort of censorship, I can understand why censoring the names and packaging of these makeup products is necessary overseas in areas like the Middle East, where they might have been outright banned if it weren't for the chic beach coverup that Bahama Mama slipped on. Every woman should have access to birth control, basic human rights, and a tube of classic red lipstick. At the end of the day, who really cares if it's called "Vicious Trollop" or "Fire Engine Red" when you look just as beautiful either way?

Nonetheless, I still find the need to draw a more conservative ensemble on the body of bronzer cartoon character kind of hilarious and the need to censor the word "sex" from a mascara tube ridiculous. And the thing is, there are tons of cosmetics out there with names way more risqué. Check out these other beauty products that probably would never make it past the makeup morality police.

Now when I think "deep throat," I don't think 'peachy, shimmery pink blush' but to each their own.

Maybe they'll just pop, "...between two consenting and legally married adults" on to the end of the name.

I legitimately laughed at this one because I have the maturity of a five year old.

Playboy's First Blush in Tie Me to the Bedpost

And the brand is Playboy, so already we're nil for two over here...

The Multiple in G-Spot by Nars

Hasn't Nars heard the g-spot is probably just a myth?

I don't know any oral sex euphemisms from other cultures, so this one might actually pass.

More like this
The Reverse Cat Eye Is A Flawless Smoky Makeup Look For Fall
By Olivia Rose Ferreiro
15 Must-Have New Beauty Launches, According To Our Editors
By Rachel Lapidos
This Week’s New Makeup Releases & More Beauty Headlines
By Audrey Noble
Billie Eilish Teased The Debut Of Her New Fragrance
By Audrey Noble
Get Even More From Bustle — Sign Up For The Newsletter