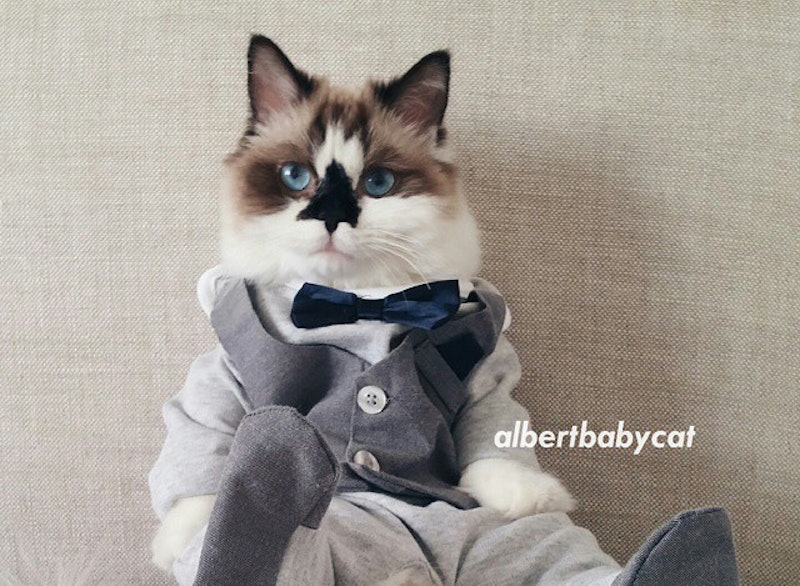 It’s no secret that the Internet was made for cats. After all, we’ve seen them grumpy. We’ve seen them jumping in and out of boxes. We’ve even seen them play the piano. And now, thanks to this tiny little kitten with a knack for crafting the perfect #OOTD, we’ve got a cat with style. World, meet Albert Baby Cat. Armed with big blue eyes and sartorial sensibilities, Albert has become an Instagram star, with more than 63,000 followers. That's more than some of the industry's most followed fashion bloggers.

Although he's on the path to becoming a fashion icon, he's got his sights set somewhere else: the big screen. “We are hoping for Albert to one day star in big blockbuster-movies with celebs like Daniel Craig and Brad Pitt,” owner Christine Look, who is the mastermind behind Albert's, ahem, look, told InStyle . (She’s his stylhisst, if you will.)

Even though he’s more likely to chase balls than star in Moneyball, the one-and-a-half-year-old munchkin kitty is a chameleon of sorts. In fact, if you look through his Instagram, you’ll see that he’s tackled almost every type of role available in Hollywood. Here are 8 of our favorite looks from Albert Baby Cat's Instagram.

Instead of meowing, he looks like he’ll complain about how the Hamptons are, like, so over right now.

2. The Guy Who Lives in His Hoodie

Hey, it’s not a party until something gets broken. And cats are excellent at knocking things over.

All suits. All the time. Albert’s got it covered.

For those who complained about Ben Affleck’s casting in Man of Steel 2, here’s another choice.

Tell us again how nice Dubai is this time of year.

Albert abides. And his ducky bathrobe is super-cute, too, man.

Even Avril would approve.

Albert's a finalist in Animal Planet's Next Cat Star, which is like the American Idol of the feline world. So stay tuned for Albert to take his first big Hollywood meeting ... where he is sure to claw the hell out of the furniture.