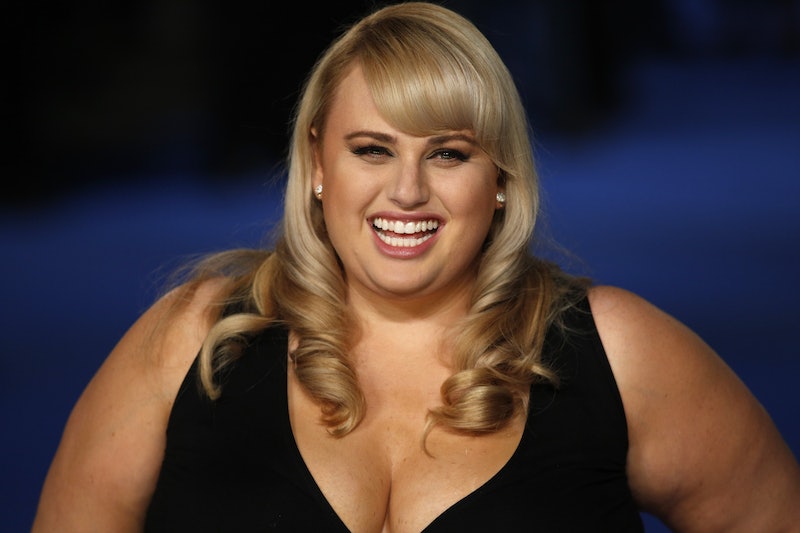 Because plus-size visibility is still so lackluster within mainstream media, it's easy for us body-positive folks to jump for joy at the slightest announcement that a plus-size person we admire and/or respect is being acknowledged for his/her achievements. When Mary Lambert writes about body image whilst celebrating her fuller figure or plus-size model Courtney Mina posts lingerie selfies for a week mostly to public accolade, we're instantly inspired. "Yay, people get it! The desire for acceptance is infiltrating the general population," we think. So when plus babe and Pitch Perfect star Rebel Wilson lands a cover for Elle Australia, our celebratory hats are on. We're ready to add the triumphant occasion to the list of "best moments in size acceptance" whilst shaking our fuller-figured rumps to Robyn's Body Talk album (part one, preferably).

Let me preface this by saying that Rebel Wilson is a stunning human. She could wear that heart tee from her musical or a gown that contours and silhouettes her body or, yes, a plastic frock, and she'd still look impeccable. It would seem that people are finally taking notice of her style skills, too, given that Elle dedicated a cover and spread to celebrating the comedienne. The accompanying cover blurb to a close-up of Rebel's face reads, "Rebel Wilson: Her guide to self belief, knowing your worth and winning at life." Great! Great? Yeah... great!

It seems great. I mean, Rebel is one of the few plus-size celebs who has succeeded at preserving her self-confidence whilst continually fighting strong for the right to be happy at her size. You'll never catch her entertaining diet talk or falling prey to the, "But you'll be so much more beautiful — and so much healthier — if you drop a few lbs.," commentary from fat shaming critics or concern trolls.

And isn't she just the prettiest? Rebel's intense gaze and parted lips scream self-assurance — as does her entire persona any time you hear her speak or watch the way she moves, dances or sings. Unapologetically. So the issue comes not in that Rebel is covering a mainstream fashion mag (that, in and of itself, is pretty cool. Possibly it's even a slight nod from a historically more "traditional" component of the fashion industry to the more progressive movements surrounding size acceptance). The issue comes in the styling. Because it's not enough to put a "token" fat person on a magazine anymore to show that you're improving — to show that you're opening your mind to the existence of beauty outside a minuscule box of standards. There has to be a follow-through — a genuine celebration of that person's talents, but also of his/her body.

Out of three publicly released images of Rebel's shoot, two are close-ups of her face. In one, we see the top half of what can only be described as dainty and perfect princess-wear. A bit of lace, a bit of tulle, a bit of rose pink and some serious femme prowess. But not much below the chest — just a hint of a flowing, skater-esque silhouette. In the cover shot, we see nothing below the face whatsoever.

There's this thing that plus-size women have been known to do — be they age 13, 23 or 53. Oftentimes, when fuller-figured ladies share photos of themselves on social media, change their profile pic or send a selfie, they are very careful to keep the focus on their faces.

I don't think I allowed a full-body shot of myself to appear on Facebook throughout the entirety of my high school career. And I have plenty of plus-size female friends who still don't, well into their twenties and thirties. When I see photos of plus-size celebs that have been shot to do pretty much the same, I can't help but become uncomfortable. Is the message that we should continue to do this? That we should continue to hide our bodies at all costs, because our faces are the only redeemable parts of those bodies?

Most of us can see how questionable such messaging would be. And yet, it's just so prevalent. It's no wonder the fuller-figured women learn to only take face selfies when that's all they see of plus-size women in the media. For now, I remain grateful for Rebel's boldness in her everyday-wear. I simply wish that boldness would have been allowed more of a spotlight this time around.

Then comes the issue of the styling for the shoot, which leads to Rebel sporting an oversized coat. She's giving off the usual "Fat Amy" fierceness but wearing something that completely obscures her actual figure.

The thing about styling is that you can never really know how much input the person being styled had in the sartorial decision-making process. Just as you can never know how much input a person being photographed had in their shoot. For all I know, Rebel chose each of her looks. Perhaps she has a thing for minimalist fashion — despite that it's a trend that has yet to truly cater to plus-size women. Maybe she wanted to wear that particular coat, because it resonated with a part of her personality. It has a certain quirk to it, whilst simultaneously evoking chicness. And that's definitely her.

But what if she didn't choose the ensembles? What if — in what I cannot help but feel is more likely — she was simply styled in an item that was deemed "flattering?" I.e., something that would conceal any sign of fatness whatsoever. It wouldn't be the first time Elle was guilty of this. In November of 2013, American Elle put Melissa McCarthy on its cover. And what was she wearing? An equally oversized coat.

The publication came under fire for this styling decision. Critics felt that Melissa was dressed in something with the very deliberate intention of being "slimmed down." And whilst Rebel's shoot has yet to cause a comparable firestorm (and maybe it won't), I cannot help but wonder what the deal is.

There's so much beauty to bodies — no matter their size. I completely understand not wanting to be considered for your body alone. It's a cause I am undoubtedly in support of. Just as I am in support of women wearing what they so choose, regardless of their figures. If you're plus-size and want to live in baggy midi skirts and loose-fitting knits, please do so. If you're plus-size and want to be in bodycons and pencil skirts and crop tops, please do so as well.

When it comes to Rebel Wilson, however, her personal style has always vibrated with a rule-breaking energy. She's often seen in figure-hugging apparel, bold colors, bright prints and pretty much everything fat women are told not to wear. It's an integral part of who she is — or, at least, of the image she puts out into the world. But it is not an integral part of Elle's styling or shoot. And that makes it feel like Rebel is missing (even if her signature "rawr" facial expressions remain in tact).