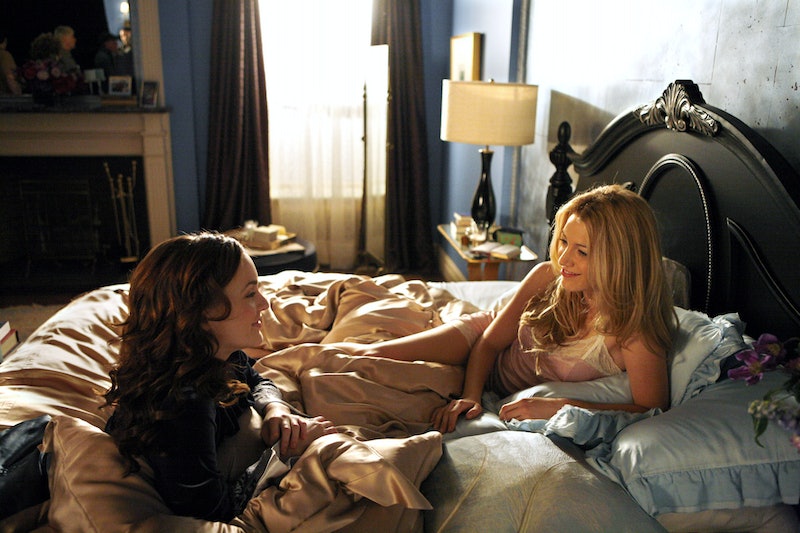 We have let adulthood rob us of so many privileges. Twenty-something years ago, it was totally acceptable for me to run around the backyard without any pants on, and although my memories of it are vague, they are nonetheless so, so sweet. Now my legs are imprisoned by pants, I'm expected to magically know how to file taxes, and people get super judgey when I drink from an apple juice box. Who let adulthood hold such dominion over us?! Why aren't more people placing priority on figuring out how to retain the best parts of our childhood and integrating them into a well-lived adult life? It seems like something that should matter a great deal to all of us. Because growing up is great, but there's absolutely nothing to be gained from leaving behind literally every part of being kids. Some of it was too correct to let fall away forever.

I have to draw the line somewhere, and so I am drawing it at sleepovers. Sleepovers are too sacred to fall victim to the clutches of the grown-up world, and now they need to be more fiercely protected than ever. Let's be real, guys: Nobody likes going out. What people actually like is the relief of getting back home after they go out. LIFE HACK: Don't go out in the first place, and hole into your apartment with all your friends instead.

I'm not just saying this because I am the self-appointed Fairy Godmother of Never Going Out Again, but because the ancient art of sleepovers deserves to be acknowledged and celebrated in the highest of not-pants-wearing honors. Of course, the script for an adult sleepover deviates from the one you had as a kid, but it's still fulfills the same purpose at its core: celebrating friendship, and eating as much as you possibly can before 2AM. In case it's been awhile and you need a little guidance, here are all the steps you must take to achieve sleepover nirvana:

Obviously buy a bunch of booze

In fact, some of the best sleepovers I've ever had have started at the liquor store. As a person who once had a job where I had to make monthly trips to buy giant bottles of Kahlua, I can attest to how awkward it is to venture into a liquor store by yourself, even if you're just buying a six pack. But when all your pals are there with you, it's like the FUN FIELD TRIP you obviously never took as kids. Plus, that way everybody gets the alcohol they enjoy consuming and you can make more of an effort to split the costs. (This just in: wine costs money.)

Rent/stream a bunch of movies with a theme

I'm a HUGE proponent of theme nights, both because I'm a theater kid and I live for themes, but because it saves you at least thirty minutes of, "I dunno, what do you wanna watch?" while you all passive-aggressively fantasize about smacking each other with the Netflix remote. Themes of mine you may borrow: movies featuring Channing Tatum's butt, or all Amanda Bynes movies. (Just kidding, I just want you to watch She's The Man. I see now that this wasn't helpful at all.)

Stop wearing any kind of pants that are socially acceptable

If someone walks in wearing a pair of jeans it is an immediately Emergency Situation that can only be corrected with an elastic waistband, or not wearing pants at all. It is the host's responsibility—nay, civic duty as an American—to make sure there are several extra pairs of sweatpants available for emergency use at all times. You really have no business hosting a slumber party if you don't have back-up sweatpants (or funny-ugly pajama pants) for all your friends. Although, to be fair, you have no business showing up to a slumber party wearing anything else, so.

I'm pretty sure the food I've consumed at each adult sleepover has taken at least a day off of my life, and it was worth every lost second. In college it was considered an enormous offense if my roommate and I didn't have a giant Tollhouse cookie dough roll in the fridge at all times. I can't imagine ever being unprepared for a sleepover in the snack department.

Before anyone even THINKS about putting a movie on, the rules to this game need to be established. This is why I cannot stress enough how helpful setting a movie theme is, because the inspiration for your drinking game rules will flow freely and easily.

Accept that perhaps none of your movies will be properly watched

Between people shouting lines at the television, potential party fouls, and obviously the need to get up and hoard more snacks every twenty minutes, you might vaguely see some of the important plot points. There's no point in shushing humans, though. It's gonna happen like it happens and you'll all be better off for it.

It's not really a party until somebody has pulled "pooping back and forth forever and ever" out of the deck, TBH.

Download a dating app and troll a bunch of people

I was technically doing this for work when I downloaded Tinder and talked exclusively in Drake lyrics with one of my BFFs by my side, but now I am so addicted to screwing with strangers that I feel the need to tell everyone that this is a Mandatory Sleepover Activity. (Future version of myself: if you are reading this in twenty years, this right here is why you are #foreveralone.)

I feel like getting to that threshold when you can just say whatever you want about the misadventures of your genitals with your friends might actually be better than the sex itself.

Reminisce/cringe about your social media past

I can't tell you at what exactly point in the night this should happen, but I can tell you that there is no escaping it. You'll likely be scrolling through each other's old feeds for twenty minutes gaping at each other's brace-faced #tbts before you even realize what's happening.

Sleepovers are the ultimate Safe Space for all the whining and having of feelings that you don't vocalize in the light of day. Plus, at this point, everyone is just emboldened enough by their wine intake to trash talk each other's less-than-lovely exes. Every now and then, you just gotta air this stuff out to get it off your chest, like changing the oil in a car or singlehandedly eating an entire jar of Nutella.

Continue eating until you're blacked out

I've never gotten close to blackout drunk at a sleepover. I have, however, gotten blackout full on just about every occasion. My theory as to why I never get fully drunk at sleepovers is because I have like ninety cookies worth of cookie dough absorbing the alcohol inside me, and also because I reach a level of full where my body just shuts down in an attempt to save itself.

Pretend to go to sleep

Somebody will yawn and put their heads down on a semi-comfortable surface, and everyone else will follow suit until one very pathetic person (usually the person that I am) says, "WELLLL I'm tired, let's hit the sack." You'll all close your eyes for like a second and then it will be...

With all the lights off and everyone laying on the floor, it's like you finally have reached a place that transcends any judgment or weirdness, and anything and everything is fair game. This is when you talk about where you're gonna go after you die, or confess the most embarrassing things you've ever done, or quietly continue eating Pocky sticks even though you swore upside down and backwards that you were done for the night (dammit).

Ugh, biological mechanisms in the body keeping us alive. If we must.

The sleepover isn't a real sleepover until you've woken up and continued to pulverize your digestive system by testing its utmost capacity. THIS IS ITS DESTINY. Do not deny it the buttery, fat-tastic, grease fest it deserves.

More like this
The Spiritual Meaning Of Angel Number 000, Explained
By Kristine Fellizar
Lindsay Lohan & Jonathan Bennett Celebrated Mean Girls Day Very Differently
By Jake Viswanath
20 Photos Of The 'Hocus Pocus' Cast Then & Now
By Radhika Menon
12 ’90s Movie References You Missed In 'Do Revenge'
By Radhika Menon
Get Even More From Bustle — Sign Up For The Newsletter